Twelve years after the latest main entry in the DOOM series, gamers will go back to Mars in order to terminate Hell's demons. 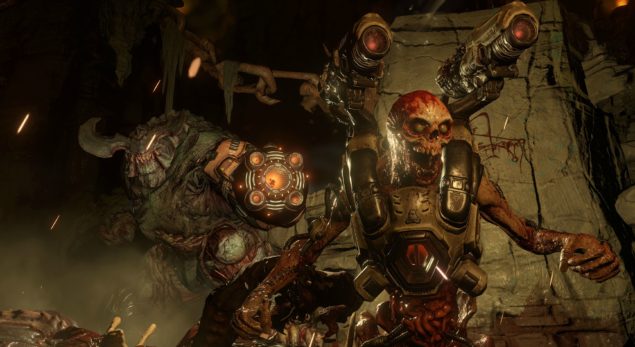 The reboot by id Software is scheduled to release in Q1/Q2 2016 for PC, PlayStation 4 and Xbox One, and it's powered by id Tech 6, the latest iteration of id's trademark engine. This fresh video interview shows some developers talking about id Tech 6 and saying that their objective is to make the best looking game at 60HZ/FPS; they're also targeting 1080P for consoles. Hopefully,  the PC version will be able to go beyond both in terms of frame rate and resolution.

Moreover, the main differentiator with id Tech 5 is that DOOM will enjoy dynamic lighting and physically based rendering thanks to id Tech 6.

Other videos were released earlier this week, showing gore and the concept of "push forward combat".

Basically, DOOM will discourage cover based mechanics and won't have automatic health regeneration; health will be regained by killing enemies continuously or by gathering health packs through the levels, which should guarantee a strong pace of action.

Moreover, there will be a new melee execution system: once an enemy has received enough damage, players may execute a takedown which usually results in a lot of gore, for the joy of DOOM fans.

DOOM will have many multiplayer modes; moreover, a SnapMap tool is built into the game, allowing all players of all platforms to create and share levels and modes with the community.

Stay tuned for our continued coverage on this hotly anticipated title.