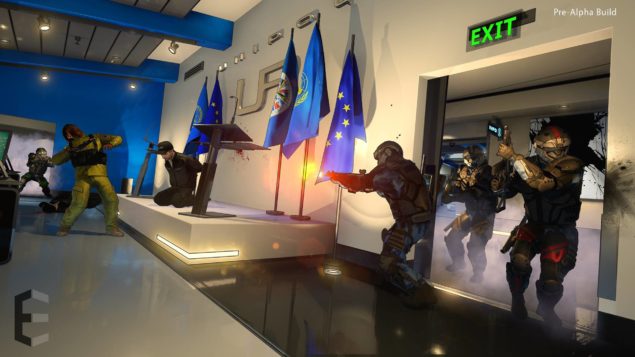 Serellan LLC revealed in a press release today that their latest game, Epsilon, will appear on Steam Early Access later this Fall.

Epsilon is a squad based stealth tactical shooter being made with Unreal Engine 4. CEO & Creative Director Christian Allen said:

We are very excited to bring Epsilon to the PC. Epsilon focuses on pre-planning, tactics, and gadgets over linear cinematic shoot-em up gameplay.

The art team worked together to build a visually vibrant experience for Epsilon. I am happy that we were able to bring that style to Epsilon. We didn’t want to work on yet another green and brown shooter.

You can definitely verify this last statement in the screenshots gallery below. Serellan is also working with Craig Gilmore (an artist with credits for Marvel, DC Comics, Ubisoft, The Walking Dead, Revolution and more) to create a graphic novel that will function as in-game cinematics for the storyline.

The plot itself is heavily inspired by themes in the ongoing crisis in Eastern Europe and the growing sense of Oligarchy in America in connection with groups like the Bilderberg’s. A reportedly unique cast of diverse team members will drive the story forward.

Epsilon will be free for those who backed Takedown on Kickstarter

Music won't be left behind either, as Serellan hired composer Rich Douglas (who worked on Insurgency and Shadowgate before) in order to create an "ethnically inspired soundtrack" for Epsilon.

Lastly, this game will be free for all Kickstarter backers of Serellan's latest game, Takedown: Red Sabre, which was received poorly. Hopefully Epsilon will be much better; we'll know more very soon, since it will be playable at the Razer booth during PAX Prime.