The last news D&D fans wanted to read is probably of Sword Coast Legends delayed, however that's exactly what we have to report today. 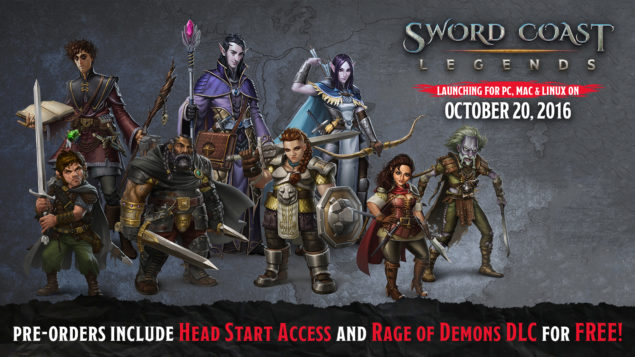 Developer n-Space and publisher Digital Extremes have just sent out a press release which states that the PC version of the game received a slight delay and it will now launch on October 20. The console versions were shifted as well: they were scheduled for Q4 2015 and now they have been moved to Q1 2016.

Following a successful Head Start access program for Sword Coast Legends, over 15 thousand players have logged thousands of hours of playtime, clearing dungeons and taking advantage of the title’s powerful Dungeon Master campaign creation features to create a wealth of customized adventures. Based on player feedback, n-Space plans to focus efforts on polish to provide players with the best possible experience at launch.

When we set out to create Sword Coast Legends we wanted to give players an exciting new way to experience the magic of playing D&D with friends. The decision to delay the launch of Sword Coast Legends was not an easy one to make, but after receiving feedback from our dedicated community, it became clear that a few more weeks of polish would provide our customers with the best possible experience at launch.

As mentioned by the image above, all players who pre-order Sword Coast Legends will receive the Rage of Demons DLC for free, even if they didn't actually participate in the Head Start weekends.

You can already pre-order on Steam and PlayStation Store for $34.99. In case you're interested to see some actual gameplay of Sword Coast Legends, take a look below at our livestream from Sunday with me and Chris Wray dying a lot in a dungeon full of goblins.