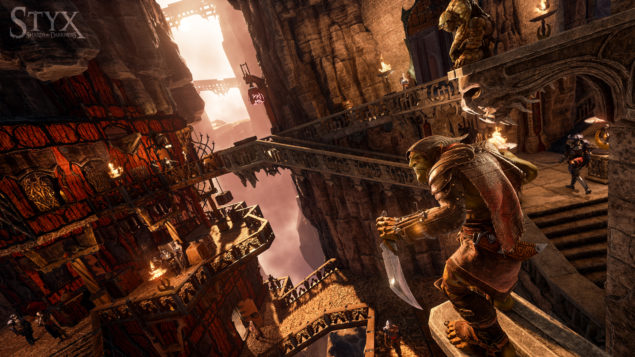 Focus Home Interactive didn't forget about Styx: Shards of Darkness. Coinciding with the ongoing lineup reveal, the French publisher sent out a press release with some new great looking images of the game.

The transition to Unreal Engine 4 from Unreal Engine 3 certainly helped the visuals a lot, but what's quite striking about the new screenshots is that Styx: Shards of Darkness seems to have large environments.

From the City of Thieves, built from the wreckages of lost ships, to the great Elven city of Korangar hidden in the mountains, the environments of Styx: Shards of Darkness are enormous and semi-open, with an emphasis on verticality. They allow for a lot of freedom to complete the various missions' objectives. They are fantastic playgrounds for Styx to test his stealth and assassination skills, and try out his new moves such as rope-swinging and zip-lining!

These are just some of the huge open spaces oozing with verticality to explore in Styx’s new infiltration adventure! With new ways to traverse the landscape, a deep and original story, as well as huge new features yet to be revealed, Styx’s 2016 mission will be his biggest yet!

Styx: Shards of Darkness, a direct sequel to the hidden gem Master of Shadows, was announced four months ago with the following excerpt about the plot.

Following the fall of Akenash tower, an extraordinary matter has forced Styx out of hiding to infiltrate Körangar, the city of the Dark Elves. Supposedly impregnable, a diplomatic summit offers Styx a chance at slipping in unnoticed, as he learns that the event is nothing but a mere façade… Moreover, the Elves have joined forces with the Dwarves, and the only thing both races have in common is a mutual hatred of the Goblins…

Embark upon a stealthy adventure with new enemies, new environments, and a plethora of new mechanics aimed at refining the abilities and movement of Styx; grappling around corners, climbing ropes, and using his trusty knife as a zip-wire. Shards of Darkness aims to offer unparalleled freedom of movement, along with refined stealth and assassination mechanics, expanding and improving on the strengths of the previous game.

The game will be released in 2016 for PC, PlayStation 4 and Xbox One.