A couple of days back, Capcom has revealed new details on the Street Fighter V March Update as well as more on the first DLC character launching this month, Alex from the Street Fighter III games. A few hours ago, the Japanese publisher has shared even more screenshots showcasing the features coming this month to the new entry of the popular series. 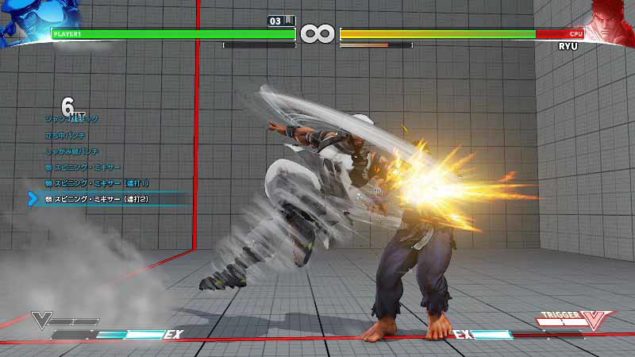 The new Street Fighter V screenshots, taken from the Japanese version of the game, showcase some of Alex's moves and special techniques, as well as the new general and character focused tutorials, the new Trials, which will allow players to obtain more Fight Money by completing them, the soon to be launched shop and more. You can check out the new screenshots right below.

First DLC character Alex, tutorials, Trials and the game's shop aren't the only new features coming to Street Fighter V this month. The online modes are also getting enhanced, with an online rematch option, allowing players to play a 2/3 set in Ranked Match, and 8-players Battle Lounges with a spectator option. Bug fixes and some light gameplay tweaks are also coming later this month.

Last week, Capcom has shared more on how rage quitters are getting punished right now. While the team is still working on a permanent solution, they are punishing the worst offenders by taking away most of the earned League Points.

First off, we want to thank the community for being so proactive on this issue. Ever since last week, we’ve received a ton of videos both here on Unity and our social channels which we’ve been able to cross reference with our data and put together a clear picture as to which players are abusing the system. Though we were pretty confident that players in our system who had high disconnect rates were indeed those who were attempting to avoid a loss at all costs, we didn’t want to start dishing out any punishments without clear proof.

Street Fighter V is now available in all regions on PC and PlayStation 4. The March update has yet to be dated.