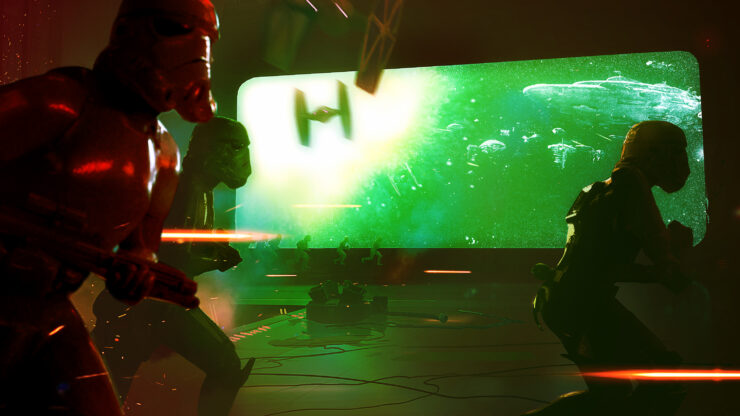 Maul’s red double-bladed lightsaber appeals as the Sith Lord gets ready to battle Jedi-Master Yoda in this fresh new visual for EA Dice’s Battlefront’s sequel. Check out the shot below.

In the visual, Phase II Clone Trooper armor can also be seen at the top of the stairs, which was used during the later days of the Clone Wars.

“Sleek N-1 Starfighters and Vulture Droids scream overhead spewing light and fire”, EA wrote on Battlefront II’s website recently. “Nimble AT-RT Walkers race around corners, pursued by roaring AATs. Agile Clone Jet Troopers hop from rooftop to rooftop, while rampaging B2 Super Battle Droids level everything in their path. Armies of Clones and Droids sprint across cover, their blazing weapons shattering the tranquility of the once-peaceful capital of Naboo. And at the center of the swirling melee the lightsabers and Darth Maul and Rey cut swaths through the ranks of the battling troopers.”

Star Wars Battlefront II will release on November 17 for PC, Xbox One and PlayStation 4.

EA Still “Has A Ways To Go In Fully Understanding Gamers’ Appetites For Microtransactions”; PC MT Revenue Doubled Since 2012