SpaceX Starlink Router Will Support 2.4GHz & 5GHz And Will Be Made In Taiwan 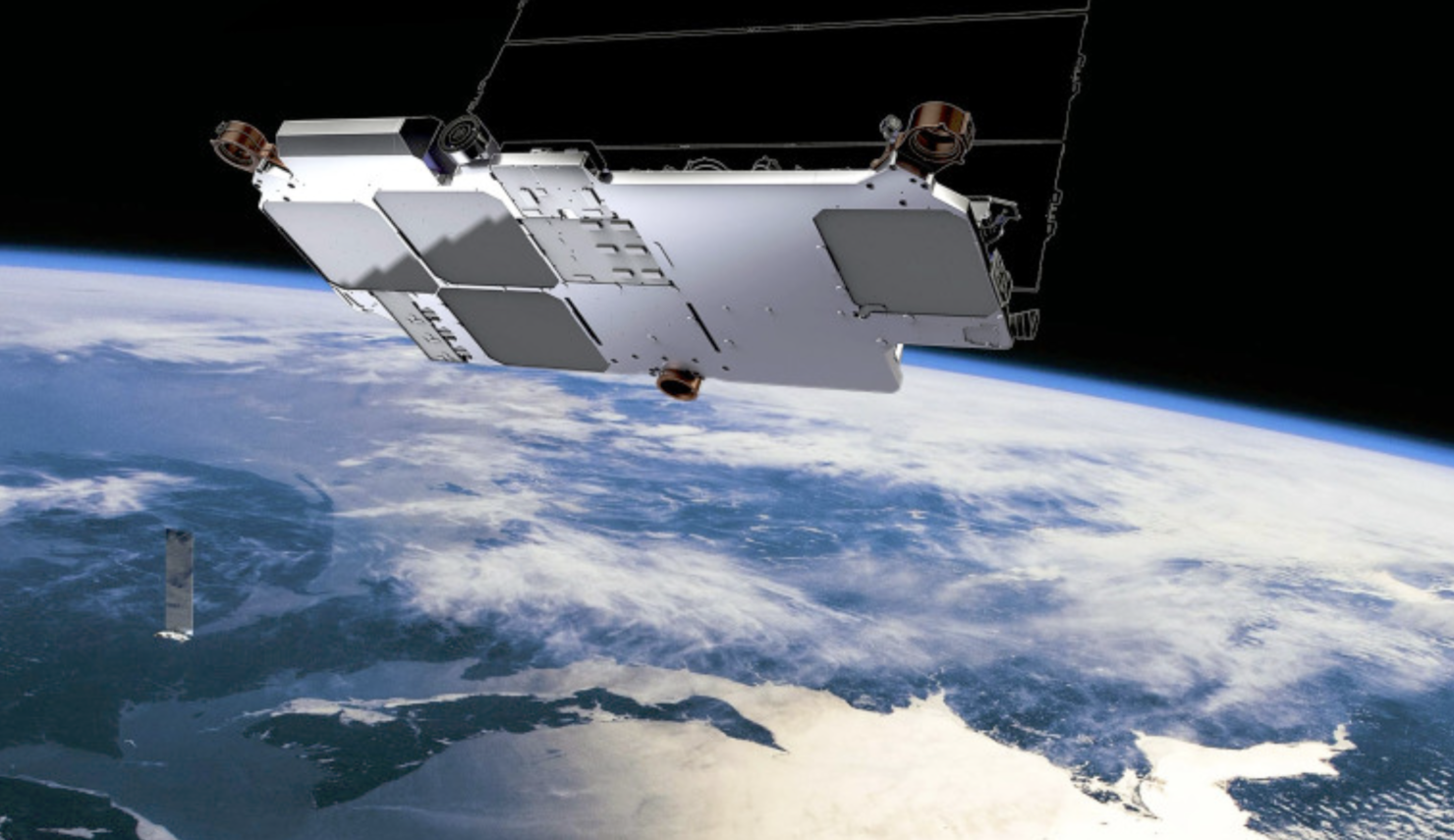 Launch service provider and equipment manufacturer Space Exploration Technologies Corp. (SpaceX) is building its own constellation of Non-Geostationary Satellites (NGSO) dubbed Starlink to provide users in North America with satellite-based internet connectivity. SpaceX intends to remove the barriers to access to the internet that are often created due to geographical constraints and it is also hoping to secure funds from the Federal Communications Commission (FCC) under the regulatory body's plans to bring internet connectivity to rural Americans as part of the Rural Digital Opportunity Fund.

The FCC's rulings on the matter have exhibited the Commission's concerns about Starlink being in experimental stages, and SpaceX has countered these by asserting that the network will become operational for customers in the United States by the end of this year. To that end, Starlink just achieved a critical milestone to prove to the FCC that the service is indeed in the final stages of early rollout, as the regulatory body has approved SpaceX's application for Starlink's wireless routers.

SpaceX's filing with the Commission reveals key details about the router, and if we provide ourselves with the luxury of conjecture, then it might also have provided details about the company's internal estimates regarding Starlink's full-scale commercialization. The rollout of the network depends on a handful of factors, all of which must be fulfilled if SpaceX is to successfully deliver satellite internet to users that are willing to foot the bill. These factors include extensive satellite deployment, no constraints to spectrum allocation and rollout of the required hardware to the end-user.

For starters, it's clear that the router will be manufactured by the Taiwanese Wistron NeWeb Corporation. Wistron is one of the several contract manufacturers that operate out of the island and provide assembly and other facilities to renowned American tech giants such as Apple Inc. The routers will also be manufactured in Taiwan according to the Label Locations diagram (second image below) part of the filing.

The documents also reveal the dimensions and shape of the router, which does not appear to resemble a standard design. SpaceX's Starlink router will be triangular in shape, and when viewed from the base, the height of this triangle will be 72.5mm and the base length will be 38.5mm. Additionally, the label location diagram in the filing shows the bottom of this device with metallic silver finish which is confirmed to be aluminum spray paint in the label location information diagram (Instruction five in the first image below).

While these are all the details for the router's physical appearance that are not limited by confidentiality, the filing also provides insight on SpaceX's plans for marketing the routers to the general public. The company has filed two requests of confidentiality with the FCC as part of the router's approval application, and of these, the short term request asks the Commission to withhold the router's internal, external and test setup photos and the user manual confidential until 180 days after authorization to prevent leaks and competitive harm to SpaceX.

What this implies is that SpaceX should start marketing the routers within six months of today's filing as otherwise, the company would have to request the Commission to extend the timeline of this confidentiality. This timeline falls in line with estimates of the internet service's initial public availability, and as mentioned above, SpaceX has plenty of motive to convince the FCC that it is capable of delivering on time. 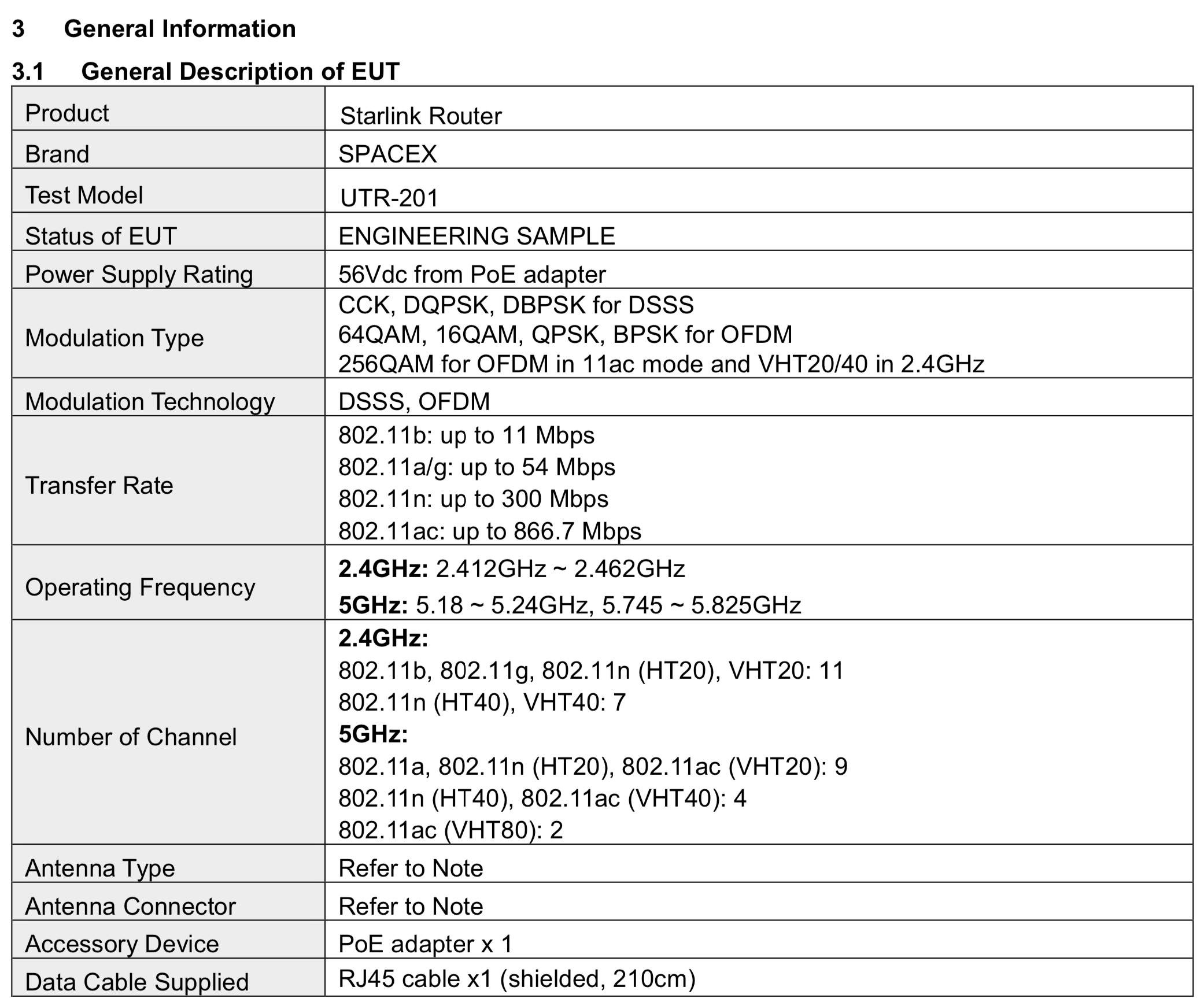 The Supplemental "Transmit Simultaneously" Test Report part of the filing reveals the technical specifications of the router. (Image Source: FCC)

Finally, the filing also reveals the technical specifications of the engineering test unit (ETU) that SpaceX submitted for testing to the FCC. They reveal that the router will be able to support Wifis 802.11b, 8.2.11a/g, 802.11n and 802.11ac - with 802.11ac being able to provide the end-user with a data transfer rate of 866.7 Mbps (Mega-bits per second).

Additionally, the router will operate on both the 2.4GHz and 5GHz frequency spectrums and two printed circuit board (PCB) antennas. Simultaneous transmission of the frequencies without interference will be possible on the router and the device will also be capable of a maximum output power of 990mW when operating in the 2.4GHz band.

Multiple-input, Multiple-output (MIMO) is also supported on the router with the FCC's tests being conducted using Dell laptops.

The filing marks an important step for Starlink, and the FCC plans to publicly reveal the router's photographs and user manual in the second week of January next year – therefore, those who are curious about Starlink's launch date now have a definitive timeline to look forward to.

Details of the filing can be accessed as part of the FCC Filing ID 2AWHPR201.