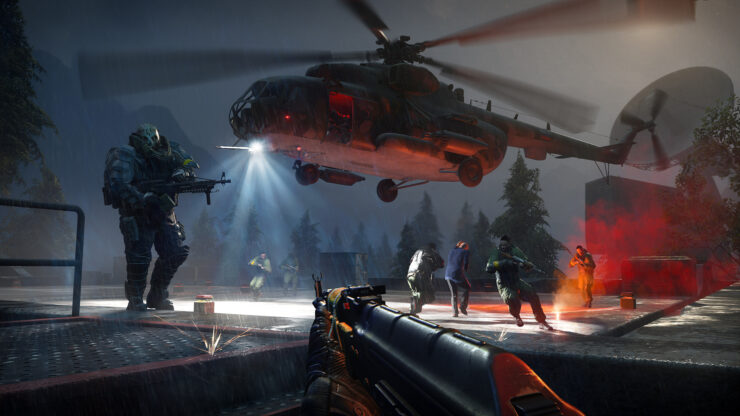 CI Games recently delayed Sniper: Ghost Warrior 3, their open world FPS tactical shooter, to April 4th, 2017. The publisher cited the need of properly optimizing the game across all platforms to make sure it runs smoothly.

Sniper: Ghost Warrior 3 takes place in Georgia, Eastern Europe. With separatists occupying the Northern part of the country, many civilians have left Georgia under the increasing pressure of the invaders. These separatists rule with an iron fist and the entire territory is guarded by enemy forces; in this uneasy environment, retired US marine Jonathan North infiltrates the region with the objective to stop another Cold War.

CI Games shared a brand new gameplay video that shows a full mission of Sniper: Ghost Warrior 3 (in development for PC, PlayStation 4 and Xbox One with CRYENGINE), alongside several new gameplay details such as the ability to interrogate enemies to get specific information in a manner that sounds similar to Metal Gear Solid V.

Safe house is a safe place in the world where the player can choose equipment, sleep to a designated hour, craft, buy items in the shop and start missions. There are several safe houses on each map, and player needs to discover them to be able to use them. There will be loot waiting or new weapons to equip in newly discovered safe houses. Player can fast travel to a safe houses from any place in the world (fast travel is disabled after entering a mission area).
Weapon Cache is a place where the player can change his loadouts. Primary weapons, secondary weapons, side-arms, gadgets, camouflages, and armors can be equipped here from the stock.
Here player can also modify weapons with currently unlocked attachments, or upgrade camo and backpack. New attachments, weapons and gadgets can be unlocked by completing missions, but also found distributed on outposts or out in the world. Once unlocked, the player can buy them from the shop.
Player can buy in here ammo, gadgets, med-kits and armor using game currency.
At the workbench player is able to craft regular and special bullets, gadgets and medkits using resources found in the world. There are 5 kinds of resources, each used in different proportions to craft different equipment.
After choosing a mission, the mission area will be visible on the map, and a GPS path will be displayed. Various points of interest, which player discovered earlier, will also be checked on the map. Road to the mission area leads through open maps, where the player can encounter events, points of interest, hunt for animals etc. Which route the player chooses is up to him.
The player has its own car for exploration. It will be there whenever he exits a safe house, or travel to previously discovered fast travel points. The player can use it to quickly get across map areas. Enemies can spot the player, even when he is inside the vehicle, so being careful is still required. A traffic system is generated on roads on all maps, so the player can see other non-aggressive vehicles travelling along the roads. On more heavily secured areas, the roads will be patrolled by armored vehicles.

After approaching a mission area, player can recon an enemy outpost to tag enemies, see mortar positions, reinforcement devices, possible weakly guarded areas or sabotage objects. Outposts are often vast and with many ways of entry – player can plan strategy for infiltration and exfiltration before entering an outpost.
One of the recon tools at the player's disposal is his portable drone that can fly above an outpost, tag enemies, discover sniping spots and after upgrades – detect cctv, sabotage devices and enemy types. The drone can be seen and heard by enemies, so it must be used wisely.
Outposts offer the player many ways of entry.  In scout mode player can see edges which can be climbed on or vaults. Spotting them may suggest alternative routes into the outpost.
Heavy rain makes the player harder to be heard by enemies - rainy nights are perfect conditions for silently infiltrating an outpost. Player can also tag enemies by using the scout mode or sniper scope. If the player manages to silently approach an enemy, he can be interrogated for valuable information – the result will vary on the situation (it can be mission specific info, loot boxes locations or tagging enemies on the outpost).
To give the player a tactic advantage, he can move the bodies of dead enemies out of sight (during this operation sprint is disabled).
Sniping spots are points that will give a overview of an outpost, but they are not required or mandatory to use. Spending time and reaching good sniping nests may give players a chance to clear out multiple enemies from a safe distance. White markers on enemies mean they are in the line of sight, while transparent ones mean that they are behind an obstacle.
Scope can be adjusted to a correct distance to nullify bullet drop caused by gravity. Distance to targets can be seen while in scope on top/left of the scope UI.
Wind also affects bullet drop, so it can be taken into consideration while shooting. Wind indicator (direction and strength) can be seen on top of the scope UI, the red line helper shows how much the bullet will actually be affected horizontally (with current distance calibration).
Player can use breath control while in scope to stabilize sway for a short while – this will also briefly slow down time for easier hits on moving targets.
If player happens to alert enemies from a distance on Mortar positions (their radius is large and deadly), they will behave accordingly to the player actions  - in case of sniper fire hiding in covers and trying to use mortars to smoke him out of his position.
When player approaches an obstacle or cover and it's at a correct height, he can support his weapon on it to further stabilize sway. This is signaled by raising the rifle after approaching an obstacle. It requires to zoom in with scope and the weapon will be automatically supported.
There are multiple sabotage objects that can be used with a sniper rifle. Shooting these objects will attract enemy attention – the can be used to lure enemies out of sight or separate them from groups.
Another way to lure enemies is by using special bullets which are unlockable through the game.The player can buy or craft them, he can carry 2 kinds of special bullets, and different kind of bullets can be used with different calibers of sniper rifles. Luring bullets can be used with any caliber rifles (except .50c al) and will attract enemy attention.  Player can use them to separate enemies or direct them out of sight from long range. On short distances player can also use luring stones.
Tagging bullets can be used with .338 caliber rifles – these are used to mark enemies behind obstacles or in buildings. Tagging bullets won't attract enemy attention.
Other kinds of bullets are: D.A.R.P.A, Explosives, Armor Piercing and EMP Bullets.

After accumulating a certain amount of experience the player character will gain skill points. Experience is accumulated in three separate skill trees - Sniper, Ghost, Warrior. Each corresponding to a different play style - the more a player pursues a certain style, the more experience he will get to make this style more powerful.
One example of a powerful skill is "Predator Focus” from the Sniper tree – it allows players to see outlines of enemies through obstacles.
Other example shown here is "Pickpocket” from the Ghost skill tree. It will automatically loot enemies after stealth kills – which saves time and lowers the risk of being spotted.
There are 12 skills in each tree for a total of 36 skills.
Many missions will offer ways to make it easier to complete them, but it's up to the player to find them. In this case player can lure out scientists from the radar tower to avoid risky engagements. In every mission there are given objectives, but the way player will reach and complete them is up to his play style.
Different gadgets are meant for different play styles. In this case, the player is using a Gas Grenade which can take down several enemies quietly at the same time.  Those 2 currently locked gadget slots, can also be unlocked by skills. The amount of gadgets players can carry with them on missions increases as they craft better equipment.
It is possible to use verticality of outposts to avoid enemies and perform deadly kills on unexpecting enemies or even chain stealth kills (skill unlock required).  Exploration means rewarding the player with additional loot – from medical items, trading goods and resources to new equipment and unique collectibles.
Suppressor gauge will deplete with every shot. To save player character suppressor, he can use different gadgets like throwing knives, gas mines, and gas grenades to quietly dispose of the foes.
Sources of light will make guards see the player,  and hiding in the shadows will make him less visible. Lights can be destroyed to his advantage. Destroying lights will not attract enemy attention.
If the player will look around, he can find an alternate way to navigate outposts. Climbable ledges, vent shafts, canals or ziplines are all shown in the Scout Mode – it helps to understand the player surroundings and find alternative ways.
Sometimes mission objectives can change to a different style.  Something can go wrong in any moment. Player can combine play styles as he see fit, but one can quickly turn into another.
Covers – similar to supporting players sniper rifle,  and a similar move is done with assault rifles and pistols – player can use obstacles with the right height to quickly lean above them or to the side. Raised weapon indicates the possibility to lean from cover.
Enemies got alerted and they now know the presence of the player. They will try to find him, but playing smart – even as a "warrior”, is the key to success. Player can try to ambush his enemies or divert their attention with sabotage. In this case player is setting C4 and detonating it from safe distance, so enemy attention will turn toward the explosion, lowering risk of player detection.
After the objective is done, player will always have to exfiltrate the mission area, so it has to be kept in mind while planning a strategy.