Test Reveals Which Smartphone Charges Up The Quickest – Hint: Not The iPhone 6

Apart from having good battery life on a smartphone, users now also take into account which device can charge the quickest. After all, if you're waiting at the airport, you'd want that battery percentage bar to climb to the top as quickly as possible. With that in mind, a test was carried out, aiming to find out which smartphone charges the fastest. 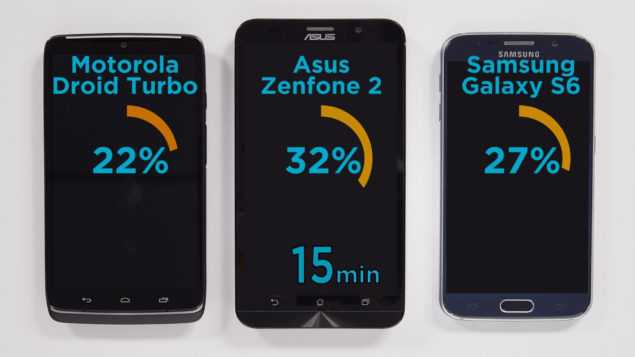 The devices used for the test, carried out by Tom's Guide, are as follows:

The test is a rather simple one and aims to find out which one of the above mentioned devices charge up the quickest in a given amount of time. So, for the test to kick off, all of the devices were first drained completely down to the zero mark. And once they ran out of juice, all of the devices were plugged in at the same time to their respective chargers.

Keep one thing in mind though, the iPhone 6 does not support fast charging technology of any sort like many other Android flagships out there, hence Apple's handset secured last place in the test.

The iPhone 6 Gets Smashed To Smithereens In The Test

5 minutes into the test, these were the results. Of course, higher percentage is better.

15 minutes more, and the winner was fairly obvious.

If you're looking for a smartphone that can charge up at the speed of light, then look no further than the Asus Zenfone 2, followed by the Galaxy S6 and the mighty Nexus 6 from Google. Unsurprisingly, the iPhone 6 sits at the bottom of the chain when it comes to charging.

If you're wondering which smartphone charged up the quickest to the 100% mark, then the results are slightly different from what is represented above.

The time below is represented in hours:minutes.

Despite being in first place after being plugged in for 15 minutes, the Zenfone 2 took one hour and forty nine minutes to completely charge up to the 100% mark. And the Galaxy S6 took just one hour and twenty two minutes to achieve the same thing. Sadly enough, the iPhone 6 took a measly two hours and thirty five minutes to fully charge up from 0 to 100%.

If you're always traveling and are looking for a quick charge, then you might want to invest in a non-Apple device, such as the Galaxy S6 or the Zenfone 2.

If the above results got you worried and you happen to be in the ownership of an iPhone 6 or iPhone 6 Plus, then don't panic just yet. There are ways how you can charge both the devices quickly, so be sure to check out: Fast Charge iPhone 6 And iPhone 6 Plus – How To.