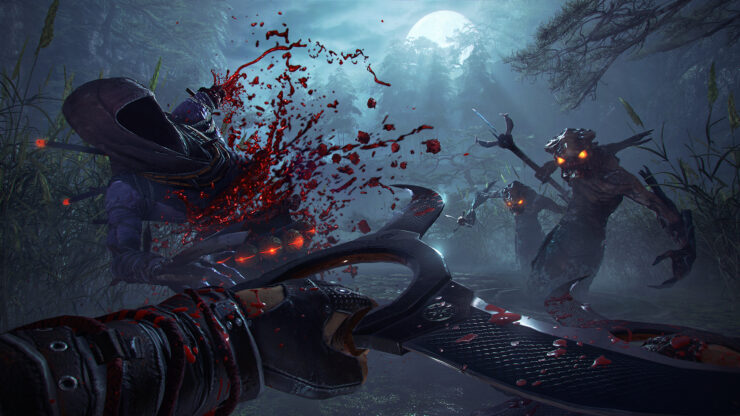 Developer Flying Wild Hog has detailed the upcoming gameplay and balance changes which will be introduced by Shadow Warrior 2 patch 1.1.4.0.

No ETA has been provided for patch 1.1.4.0, but we’re pretty sure it won’t be too long before the update is deployed. Update 1.1.3.0 was announced last week, and released several days after the announcement.

Check out the Shadow Warrior 2 patch 1.1.4.0 gameplay changes below:

Balance and gameplay changes:
- Increased cap for experience gained on all difficulties
- Added a significant bonus for experience gained on difficulties higher than normal
- Slightly decreased large and special enemies' HP on difficulties higher than normal
- Added negative stats cap for high level upgrades
- The number of auras for a single enemy is capped to 1 on difficulties below 'Insane tier 2'
- Base physical resist lowered. This change affects all difficulty levels
- After finishing missions for the second time, instead of Skill Points the player now receives a powerful new currency called 'Orbs of Masamune'. The number of Orbs depends on the difficulty level. A new set of violent challenges will be added to the game soon. Players finishing these challenges will be able to imbue Smith's Anvil with power to greatly improve weapon stats. Orbs of Masamune will play crucial role in this proccess.
- Crafting option is now available always after a player unlocks it in the first playthrough
- Items in shops unlocked by story progress are now available always after a player unlocks them on the first playthrough

The shooter was announced by Flying Wild Hog and publisher Devolver Digital last year as the “striking follow-up” to the best-selling original Shadow Warrior from 2013.

Shadow Warrior 2 is the stunning evolution of Flying Wild Hog’s offbeat first-person shooter following the further misadventures of former corporate shogun Lo Wang. Now surviving as a reclusive mercenary on the edge of a corrupted world, the formidable warrior must again wield a devastating combination of guns, blades, magic and wit to strike down the demonic legions overwhelming the world. Battle alongside allies online in four-player co-op or go it alone in spectacular procedurally-generated landscapes to complete daring missions and collect powerful new weapons, armor, and arcane relics of legend.

“The incredible reception of Shadow Warrior from both longtime fans and gamers new to the series was overwhelming,” said Michal Szustak, Studio Director at Flying Wild Hog following the game's announcement. “Shadow Warrior 2 will expand on and improve every element that made the original so unique and strike a balance between classic FPS action and modern design.”

Shadow Warrior 2 is available now for PC. The game will release for PS4 and Xbox One in 2017.