This week, overclocking enthusiasts have once again managed to push the boundaries of hardware far beyond their factory capabilities. Bulgarian enthusiast, I.nfraR.ed has managed to overclock the single core AMD Sempron 145 to 6636 Mhz. The CPU was released in 2010 and has a base clock frequency of 2800 MHz. Overclocking by I.nfraR.ed shows the capabilities of even the older line of processors and APUs out there.

Benchmark on Cinebench R15 is highest for the Sempron 145 and single core processors in general.

I.nfraR.ed has been performing top overclocking of AMD products for quite a while according to our friends over at overclockers.ru. Last weeks results were not a disappointment either, with the enthusiast living up to his reputation. The frequency of 6636 MHz had a score of 158cb on Cinebench and has set a new record in the HWBOT database.

Liquid nitrogen cooling employed. Sempron 145 not the only component pushed to its limits.

The performance specifications of the Sempron 145 were not the only ones pushed to their limits. Usage of liquid nitrogen for cooling, as shown in the above picture had its effects felt not only the Sempron, but also on the chipset motherboard. The motherboard used by I.nfraR.ed was the DFI LAN party DK 790FXB-M2RSH. It should be noted that the board already has advanced manual options that aid in overclocking and also in performance tuning efforts. If we are to take the CPU-Z screenshot above for its word, the Vcore voltage of the board was increased to 1.792 Volts. The Vcore is the voltage supplied to the CPU or the GPU and the amount of power a CPU uses and the heat it dissipates is the product of this value and the current it draws. In addition, a special fan unit was also employed for the memory modules. 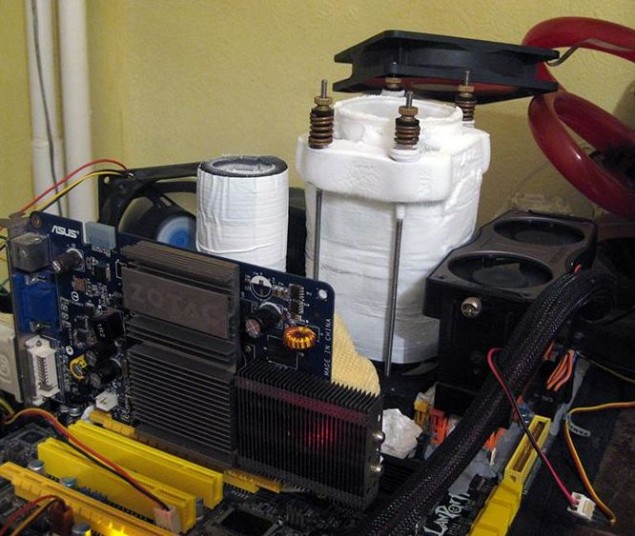