Just under a year ago, AMD released its phenomenal ‘special edition’ Omega Drivers which introduced a plethora of new features as well as bug fixes. Just today, we have received confirmation (Via HWBattle.com) that AMD is indeed working on a brand new set of special edition drivers and will be releasing them around the same timeframe as well – that is to say, November. 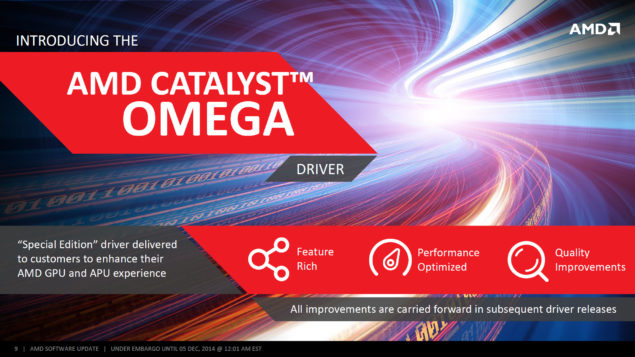 This year’s ‘special edition’ drivers are expected to launch at the same time as last year, according to the report. Which means that we are probably looking at AMD making this a regular thing with significant improvements to the catalyst driver build, delivered yearly. Although it does beg the question whether AMD would specifically delay significant updates just to cash in on the PR resulting from a yearly event. While we do not yet have details on what exactly the update will deliver this time, we do have previous year’s iteration to form a benchmark.

Omega Drivers 2014 had a very wide variety of new features, from support 4K Virtual Super Resolution, to 5K Support, to Multi Monitor and FreeSync updates. The driver also included updates for Tress FX 3.0, HSA 1.0, CUDA 2.0 and CodeXL 1.6 as well as Mantle. It is worth noting that the primary purpose of the drivers was to eliminate the disparity (that existed at the time) between GeForce and Catalyst drivers. Since there is pretty much no disparity between the GeForce and Catlayst drivers currently, it’s pretty difficult to ascertain just what AMD will be introducing this time around; and since the driver is being specifically packaged as a ‘special edition’ driver, I have to assume that it’s worth the hype. 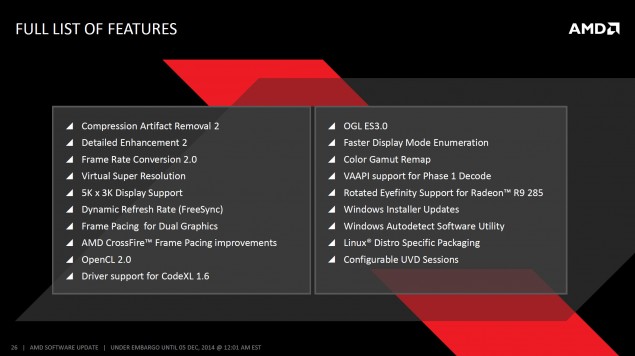 The original special edition drivers brought alot to the table in terms of features. @AMD

The official agenda for the last special edition update was quality improvements, performance improvements and new features. Assuming the new special edition drivers are similar to the Omega drivers released in 2014 (in terms of agenda) the only thing that really comes to mind (caution: speculation) is improvements and features based on DX12. The new API is pretty much the next frontier when it comes to drivers. The rules of the games are changing and whoever wins this one will get an edge for the next few years. Since titles with DX12 support are pretty few and most of it is uncharted territory, this is the perfect point in time to optimize drivers.

This is sheer speculation here but AMD could also have managed to clean up the code a bit further – something they have been very successful at for the past year. For those interested, here is our exclusive interview with Sasa Marinkovic, the man leading the team behind the special edition drivers. Needless to say, these drivers will be a mus have for people with Radeons and even APUs.

Do keep in mind that ‘Omega’ was the codename of the previous year’s special edition drivers, so this year will probably have a different naming scheme – which could be just about anything. All we know at this point is that the new special edition drivers from AMD will be landing next month in November, bringing improvements for both GPUs and APUs across the board– so stay tuned.