It's been quite sometime since we last heard anything exciting in the mechanical hard drive arena. The past couple of years have primarily been about the SSD revolution in the world of data storage. Despite that Seagate and WD have continued to work on improving traditional mechanical hard drives. 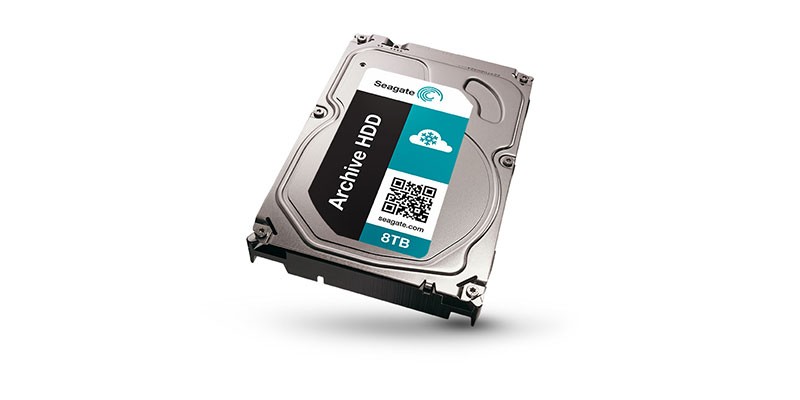 Although unlike past years the focus has turned primarily on increasing capacity rather than improving speeds. That comes back to the fact that it isn't really possible for HDDs to catch up to solid state drives in terms of speed. However hard drives remain unrivaled in the area of capacity / cost.

Seagate has been pushing really hard to maintain this competitive advantage of hard drives over SSDs, especially since the cost of SSDs has been steadily going down. The company has just announced three new hard drives with capacities of 8 Terabytes, 6TB and 5TB.

Seagate labels these new drives as "Archive" HDDs. The new drives make use of a new technology called Shingled Magnetic Recording or SMR for short. Which improves capacity per platter by 33%, allowing for 1.33TB per platter compared to the previous limit of 1TB. Seagate has put six of these 1.33TB platters together for the 8TB model, which means a 10TB+ model is quite possible with eight platters.

We're still looking at very decent performance at 150MB/s of average read/write speeds and up to a maximum rating of 190MB/s , which is plenty enough for media consumption. The drives include a 120MB cache and the platters max out at 5,900 RPM, which is below the usual 7,200.  Seagate offers a three year warranty on these new drives. The company will also offer regular and secure versions with hardware based encryption via an integrated security processor.

The new drives will begin shipping in January. Pricing for the 8 TB model sits at an MSRP of $260 which translates to 30GB+ per dollar. In other words 15 times more capacity / cost compared to SSDs.
I can think of a really fun way to make use of these new drives paired with Asrock's insane X99 Extreme11 motherboard which can support up to 18 individual drives for a total of 144TB of storage.