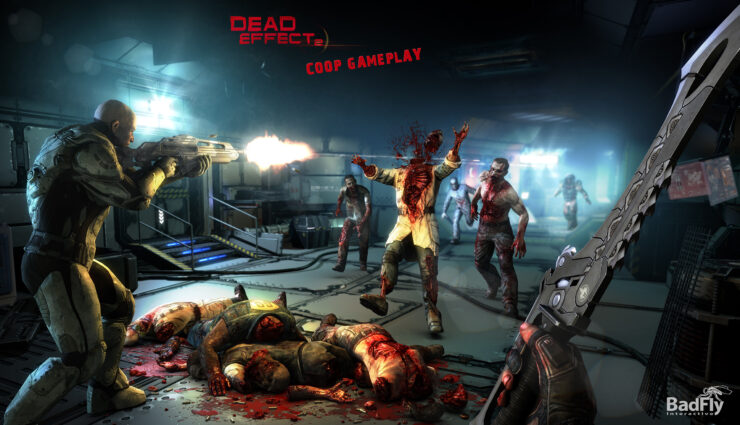 Czech indie team Badfly Interactive announced that Dead Effect 2 is now available on PC via Steam. This is a sequel to Dead Effect and, like its predecessor, the game is set on a colonizer ship infested by monsters (zombies).

Dead Effect 2 added both cooperative and competitive multiplayer to the package. According to Badfly Interactive, it should last more than 20 hours of gameplay. Here's the full feature set:

DEVELOP YOUR CHARACTER - Your hero adapts, grows and gets better as you play. Help them along the way by choosing the best gear!

- get 100+ upgradable weapons of all kinds – pistols, shotguns, plasma guns, bows, swords... you name it
- collect 300+ gear items and implants
- collect dozens of gear sets, from Regular to Mythical
- put together a complete gear set to gain special abilities
- equip your hero with a selection of 30+ special abilities, from bullet time to force field
- try high-tech body implants to increase your character’s performance
EXPLORE THE VAST SPACESHIP - A colonist ship is full of diverse environments, from maintenance rooms to oxygen gardens. And full of dark corners, too!
- enjoy the stunning environments with moody graphics
- explore the whole ship during the main story campaign
- return to complete various basic tasks in generic missions
- stand up to the challenge in special missions – Biohazard, Survive, Lone Wolf, Infestation modes

FACE DIFFERENT TYPES OF ENEMIES - You know you are not alone on this ship. There are friends, and there are foes. Sadly, the friends are outnumbered.
- test your strength against zombies, soldiers, cyborgs, mutant, cannibals, mechanical dogs, drones...
- get engaged in several unique boss fights
- complete special missions with various enemy types to gain experience
CHALLENGE YOUR FRIENDS - You can face the enemy alone, but you won’t last long. Call your friends to action and together take up arms against the enemy!
- play together in the cooperative multiplayer mode – you can play the story campaign and all special missions
- challenge your friends to a life-and-death battle in the player vs. player multiplayer mode
- conquer the elaborate system of achievements – collect all 170 of them!
- get social - share your results and leaderboard position on social media channels

Dead Effect 2 is also being ported to Xbox One and PlayStation 4, with an estimated release date of June 2016. Check out some in-game screenshots and the launch trailer below.