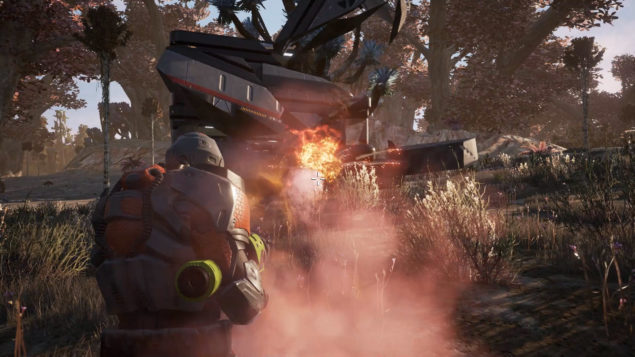 Two months ago, indie developer Above and Beyond announced its plans to switch engine for The Repopulation from Hero Engine to Unreal Engine 4. At the same time, they also revealed Fragmented, a survival spin-off game that will be used as the foundation for The Repopulation in UE4.

The news is that Fragmented is almost ready to enter Steam Early Access. There's now a dedicated page on the store with more information on what you can expect in terms of features (if you're familiar with The Repopulation, it's basically a stripped down, survival oriented version of it).

You awaken stranded on a hostile alien world, after your journey to colonize the planet takes a catastrophic turn. Armed with only your fists and your wits, you must ensure the survival of the human race. Harvest local resources to get started, and hunt wildlife with crafted weapons to provide food and protection from the elements. As you survive you will gain knowledge and access to important skills to aid in your survival. Unlock advanced technologies to build giant structures, build advanced weaponry and defenses, tame the wildlife, and use it to support your allies or crush your enemies.

Fragmented is available in multiple rulesets allowing for PvP focused content, or working together with other players to survive against the environment. Play online or in single player mode. Players will have the option to host their own servers as well and tweak many of the settings to provide an easier experience or a much more harsh experience including hardcore options.

Surviving in the world of Fragmented has its advantages. As you gain more experience you will be able to unlock higher level skills opening up different play styles and survival options. You can focus on combat related skills to take the fight to the wildlife or your enemies or you can focus on skills that will improve your base and your storage capabilities. Fragmented offers the following skills.

A tool for every job, or so they say. There are many different types of harvestable resources in the world, including dead creatures. Primitive tools will get you the basics, but you will need to build better tools for better results and to gain access to rare materials. Creatures also increase in difficulty as you venture out, including boss encounters and other surprises.

The Steam page also has a new gameplay video (in low definition, unfortunately) and the official system requirements.

According to the developer, Fragmented (which is free for those who already own The Repopulation) will remain on Early Access for a period between six and twelve months. The developer had previously expressed interest in making the games compatible with VR devices and even consoles, which should be rather easy with UE4.

We've also asked them when we can expect The Repopulation, the full fledged Star Wars Galaxies inspired MMORPG, to be back in testing; apparently, Above and Beyond is targeting "the tail end of the year".