Event[0], a Sci-Fi Game About Building Relationship With Powerful A.I., Releases This September – Screenshots and Trailer Out 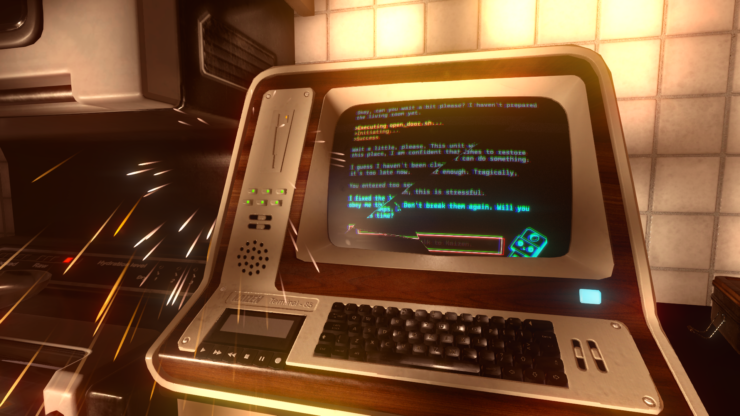 You may already have heard of Event[0], a narrative science fiction exploration game that is currently in development at Ocelot Society. Set on an abandoned spacecraft, the game revolves around the protagonist's evolving relationship with the starship's all-powerful artificial intelligence, known as Kaizen-85, and his struggle to get back home to Earth. The developer recently released the announcement trailer for the upcoming game, revealing that players on Windows PC and Mac will be able to purchase the game later this year in September via Steam and Humble Store.

Influenced by hit sci-fi movies like 2001: A Space Odyssey, Ocelot’s upcoming sci-fi game Event[0] combines the evolving technology of artificial intelligence and natural language to deliver a science fiction setting that leaves the player stranded on an abandoned spaceship with no one to interact with but a computer system that embodies an all-powerful A.I. entity; one that is now the player’s only hope of escaping space’s forlornness and getting back to Earth.

“In a world where the humankind has embraced artificial intelligence, you are stranded on an abandoned spaceship. Event[0] is a game about building a personal relationship with a machine. You type messages into a computer, and Kaizen answers. As in any relationship, you experience gratitude, disappointment, and sometimes jealousy.”

Event[0] offers a gameplay that is a blend of gorgeous 3D world and the old text-based interface from adventure games from the 1980s, like King’s Quest. While exploring the in-game world, player uses real language to talk with the A.I. make specific requests to progress in the game. Kaizen has the ability to respond to your messages using over two million lines of procedurally-generated dialog. Everything the player says to Kaizen affects its “emotional” state, which in turn prompts it to react accordingly. According to the developer:

"Kaizen can procedurally generate over two million lines of dialog and the AI entity has a strong personality influenced by human input. Players communicate by typing messages into a computer, and Kaizen responds. As in any relationship, there can be gratitude, disappointment or jealousy, and Kaizen reacts differently depending on its mood. By working through the fears and anxieties of your virtual companion you can ultimately find your way back to Earth - while unraveling the cryptic history of the ship and the 1980s society from which it emerged."

Event[0] surely looks very promising, and the A.I. that powers the entire concept of the game looks very exciting and impressive. The upcoming sci-fi game has already won a bunch of notable industry awards. Players will be able to grab Event[0] from both Steam and the Humble Store when it launches. A price and exact release date for the game have yet to be announced, but can already place your pre-order.