Sapphire's Radeon R9 Fury Tri-X graphics card has been leaked by Videocardz, confirming the specifications and other details regarding models that are made by AMD's AIB partners. The Sapphire Radeon R9 Fury is expected to hit the retail channel in a few days at a price of just $549 US and features a cut down Fiji GPU which is meant to feature a more optimized price compared to the $649 US cost of the flagship, Radeon R9 Fury X. 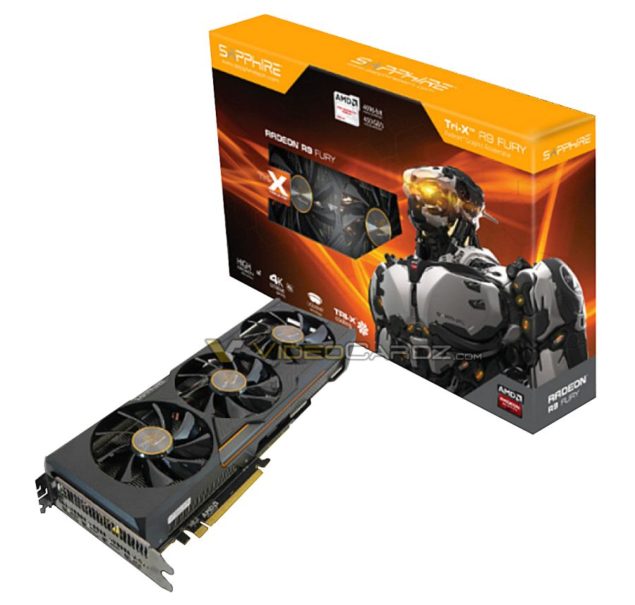 A few days ago, it was reported that the Radeon R9 Fury (Non-X) will be based on a cut down Fiji GPU. The new GPU will obviously be slower than the Radeon R9 Fury X but come at a price of $100 US along with custom built cards from AIBs like the one we are looking at from Sapphire. The AMD Fiji Pro GPU is based on a 28nm process and is the single largest chip AMD has ever produced. The chip which measures around 596mm2 has a total of 8.9 Billion transistors crammed under its hood. Being a cut down SKU, the Fiji Pro has 7.2 TFlops of compute as compared to 8.9 TFlops on the full fat Fiji chip.

The Radeon R9 Fury will fall below the R9 Fury X which still makes it a powerful card, it is based on the 28nm process which has gotten old but is now matured enough to be used to designed the ultimate GPUs (GM200 / Fiji XT). The Radeon R9 Fury comes with 56 compute units which pack 64 stream processors each, total of these amount to 3584 stream processors, 64 Raster operation units and 224 texture mapping units. The engine clock for the Radeon R9 Fury is maintained at 1000 MHz which is 50 MHz slower than the Radeon R9 Fury X. Custom cards will be overclocked out of box as Sapphire clocks their cards at 1000 MHz and also 1040 MHz (Two cards). The GPU churns out a total of 7.2 TFlops of compute performance as mentioned above which is around the same league as the GeForce GTX Titan X.

The card also features 4 GB of HBM VRAM that is clocked at a 500 MHz (1.0 Gbps data rate). The memory runs across a 4096-bit bus interface has has a bandwidth of up to 512 GB/s. The card can stick to the same power configuration of dual 8-Pin connectors and has a board power of 275W. Display outputs include three display connectors and a single HDMI port. The card will have support for next generation APIs such as DirectX 12 and supports Freesync, VSR and Frame Rate Target Control.

The Sapphire model features the Tri-X cooling that makes use of a triple fan solution and is huge as ever with a large aluminum fin array heatsink that spans the entire length of the cooler. This heatsink makes contact to the  Fiji GPU and HBM Memory chips that are situated on the same substrate die. The heatsink has several copper based heatpipes but the more surprising thing is that Sapphire makes use of a reference PCB that's featured on the Radeon R9 Fury X too. This is something to be concerned about as this indicates that Sapphire, being AMD's major AIB partners still has been unable to produce a custom PCB design and will stick to reference solution. NVIDIA was targeted by the masses for not allowing custom solutions of their Titan cards but it seems like AMD might be doing the same with their own cards which are restricted to be modified only on the cooling front.