With its share price dropping and the company reportedly loosing investor confidence, Samsung needs to do something and do it fast. In a move to restore investor confidence, Kim-Hyun Joon a senior VP at Samsung promised two new smartphones within the next 6 months. One of these is said to be made of entirely new metals, which might be a possible hint towards an all metal phone. Well, we might be looking at the Samsung Galaxy Alpha in this case, which is Samsung's first smartphone to be made out of metal.

We know quite a lot about the Samsung Galaxy Alpha right now courtesy of previous leaks. The Galaxy Alpha is reportedly to be launched three weeks before this September's IFA. This gives the smartphone a launch date of August 13th. This, and detailed performance specifications are the courtesy of a leak about the Galaxy Alpha a couple of days back. Well, this time you can take a look at the actual device courtesy of more photos that have surfaced online. On the Chinese website Weibo  several pictures have appeared which claim to be of the Samsung Galaxy Alpha. And the smartphone doesn't look half bad at all. 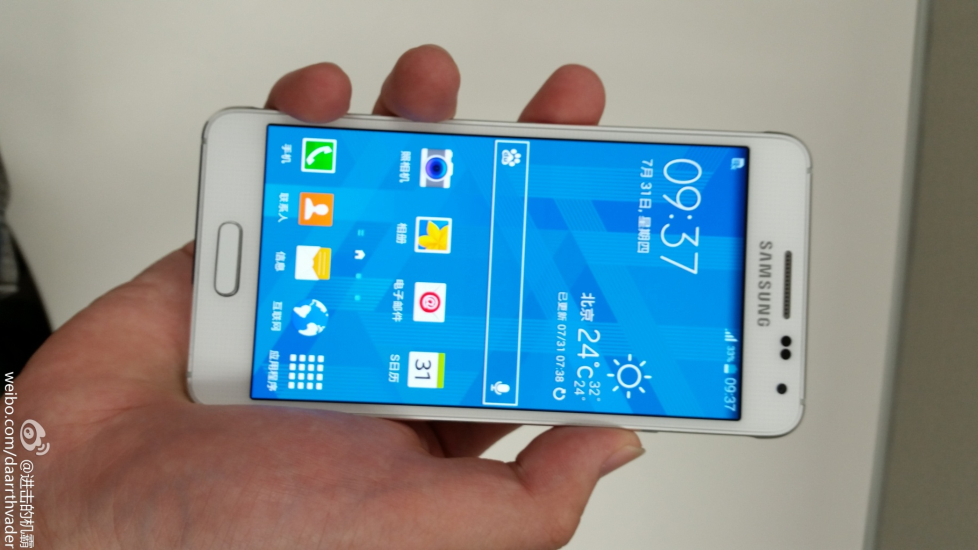 There are may out there who're speculating that the Galaxy Alpha could very well be Samsung's attempt to counter the upcoming iPhone 6. The iPhone, as we all know has always been build out of metal, which gives it a premium look and finish. With the Galaxy Alpha, Samsung also seems to be looking at the premium metal build. In the specs department, the Galaxy Alpha is to get a Octa-core Exynos 5433 coupled with a Mali T628 GPU and 2 GB RAM.