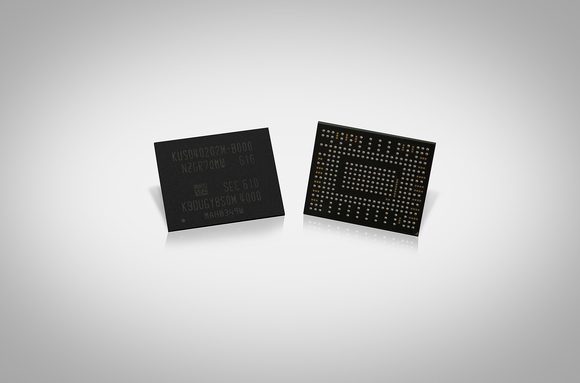 Samsung has just unleashed its brand new PM971-NVMe SSD with 512GB capacity. But what's so special about this new drive? Its physical size and speed - it screams insane.

A SSD Smaller Than A Stamp And Screamingly Fast? Look No Further Than Samsung's PM971-NVMe

SSDs are getting smaller and speedier with every release, but Samsung wants to outwit the competition with a new product, and that is the PM971-NVMe. The new SSD from Samsung packs 512GB of NAND storage on a chip that is smaller than a postage stamp. But the insanity doesn't end there - the Samsung PM971-NVMe offers blistering fast speed of 1.5GBps on the read end, and 800MBps on the write end. If you're asking us, that's absolutely downright crazy, but of course, in the most awesome way imaginable.

The PM971-NVMe fits the NAND flash, RAM, BGA, and controller all on a chip that measures just 20mm x 16mm x 1.5mm. But that's not all, the entire things just weighs a gram, which means we're going to end up seeing a new generation of ultra light and fast devices, all thanks to Samsung's breakthrough with the PM971-NVMe.

In case you're wondering how Samsung was able to pull off the PM971-NVMe in the first place - all credit can be given to the NAND that is built upon the 20nm process. And to make sure things are ticking on nicely, the drive features 4GB of LPDDR4 RAM onboard as well.

The PM971-NVMe will be available in 128, 256 and 512GB options, and mass production is on its way as we speak. And it also should be kept in mind that Samsung hasn't revealed the interface which the drive will be using, so it's highly likely that the PM971-NVMe will end up being soldered directly onto a motherboard, or interfaced using an M.2 card.

Samsung's announcement is important in a lot of ways as it will pave the way for devices that can be lighter, thinner and faster. It's now up to manufacturers how they integrate this new technology into their devices, but we're suspecting tablets and hybrids will be the first gadgets to take advantage of the new PM971-NVMe. After all, the sudden shift in how we look at an ultraportable has seen a massive change in the past few years, therefore it's likely OEMs would want to debut Samsung's blazing fast SSD in the slickest form factor possible.

There's also a chance we might see this bad boy in the upcoming MacBook refresh as well. Keep your fingers crossed, people!