Wouldn’t it be cool if you could get fast charging on your electric vehicles just as you do on your latest smartphones? Life would become a lot easier and you wouldn’t have to wait and charge your vehicle all the time. Samsung’s SDI battery subsidiary has made this quite possible in the near future. The subsidiary has announced a new battery cell that will be used in electric vehicles to increase max range of the vehicles up to 372 miles on a full single charge. But the best feature of this new battery will be that it will be able to regain about 310 miles of that charge with just 20 minutes of charging.

The new battery was unveiled at the North American International Auto Show. It comes with a decreased weight of about 10 percent as compared to current battery units being produced by Samsung SDI. The battery units will not be available for mass production until 2021 so you have to hold on a little. But the timing of the battery from Samsung SDI and the first batch of autonomous cars coming alongside from a range of manufacturers will coincide.

This quick charge would save you a lot of time on long-range trips and would make using EVs much more practical. A simple stopover at a restroom and grabbing some snacks with a plugged-in car would be enough to charge it from more than 300 miles which is a great thing. Comparing this with Tesla’s superchargers, this is about double their speed since the superchargers give about 170 miles of coverage after a 30 minutes charge. 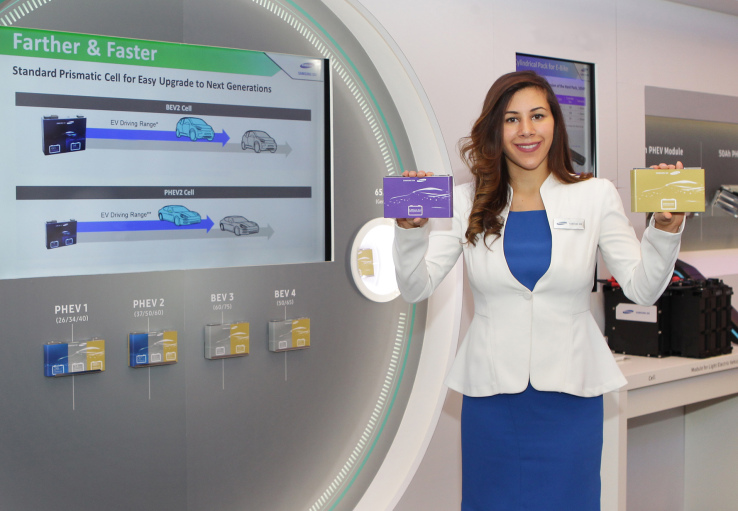 However, Tesla has plans of getting this time beat too. According to what CTO JB Straubel remarked at the time of supercharger’s inception, the main goal is to get this charging time down to around the 5-10 minutes mark, and Tesla has also been quietly boosting the maximum theoretical output of their stations as well. So it will be a quick charge war in the near future with Samsung’s SDI taking the lead this time.

Tesla is now producing its own batteries in collaboration with partner Panasonic in the Gigafactory in Nevada. So it may be soon that we hear something of challenge from Tesla too. Samsung SDI batteries on the other hand are being used by EV startups in the US according to the company. One of those startups is Lucid Motors which is a new EV company that has a lot of Tesla people on board. This would definitely be a great war for everyone, we will keep you updated as anything new surfaces.