Samsung's Galaxy S6 and Galaxy S6 Edge smartphones aren't making waves in the smartphone world the way the Korean giant intended them to. So much so that Samsung has reported another quarterly loss, with the company now planning on cutting down prices of its flagship smartphones to penetrate further into a market that is dominated by numerous Chinese vendors and even the iPhone itself. Now, Samsung has released a series of 'Smart Switch' videos aiming to help iPhone users make the jump to a Galaxy S6 smartphone, aiming to boost interest even further, subsequently leading to increased sales in the future. 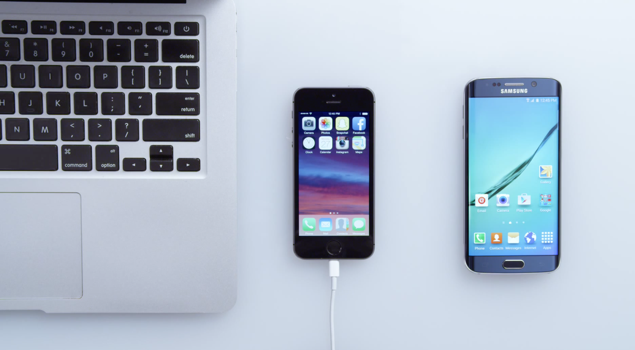 Samsung's Smart Switch software is available for both PC and Mac, and helps a user make the jump from an iPhone right onto a Galaxy S6 smartphone. In fact, according to Samsung, Smart Switch helps you jump virtually onto any Galaxy device of your liking, be it a tablet or a smartphone. This means if you're planning on jumping from an iPhone to a Galaxy tablet, you can do it. A Galaxy S4 maybe from yesteryear? That's covered too.

Apart from the desktop apps, there's a Smart Switch Android app as well, which lets you copy content from your iPhone straight to your Galaxy device using iCloud or by using a OTG USB cable. Samsung is making sure that all bases are covered well, and users make a proper jump instead of a half-baked one. Furthermore, the Smart Switch app even lets you upgrade from an older Android device to a newer one.

The only thing that's way beyond the limits of bizarre here is the fact that Samsung uses a MacBook in one its videos. It actually leaves us scratching our heads that why didn't the Korean giant choose to showcase one of its own notebook or ultrabook in an official video, but rather went directly onto its competitor's hardware, and that too from Apple.

There are a total of five tutorial videos which Samsung has uploaded to its YouTube channel to help users make the jump to Galaxy device. And instead of pointing you to a new website, we've embedded them all here for your convenience and you can check them out straight away.

If you're actually thinking of making the jump from an iPhone to a Galaxy device, then you might want to head over to Samsung's website here for even more details, and at the same time, explore their range of devices which might tickle your fancy.