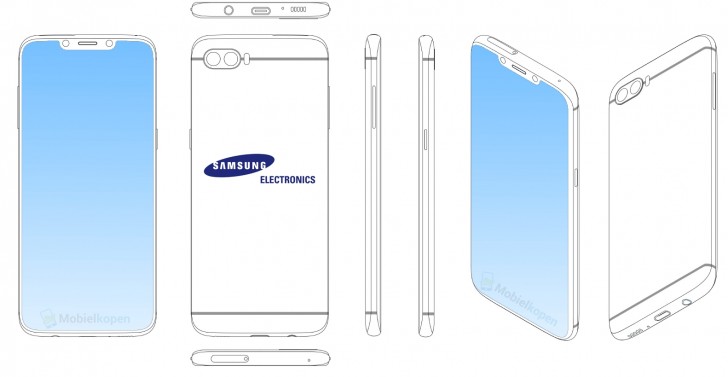 In a world where notches continue to flood the flagship smartphone market, Samsung is Noah. Refusing to follow the trend initiated by 18:9 displays, it continues to tout the benefits of reducing side bezels, instead of the ones at the top. This approach plays to the Korean tech giant's strengths, as it introduced the 'edge-to-edge' approach with the Galaxy S6 and Galaxy S6+.

However, if you think that Samsung will remain idealistic with its design, you're wrong. The Korean tech giant is eager to cover its bases. Today, we've got news for Samsung's latest notch and full-screen patents. Take a look below for the details.

Samsung Patents Full Screen, Notched Designs For Its Smartphones As The Company Is Eager Not To Fall Behind On Latest Trends

As the proverb goes, the road to hell is paved with good intentions. Apple was eager to catch up with the racing Android world last year, that had finally managed to remove pesky bezels from the front of a flagship smartphone. However, this necessitated a top cut-out for housing the device's True Depth and other sensors on the iPhone X.

Soon after, user criticism peaked, as the notch became one of the most hotly contested features in the flagship smartphone market. Initially, Android users gloated on another apparent design guffaw from Apple's end, but as more smartphones adopted this approach, the criticism was muted. Now, looks like Samsung is also looking at ways to make its devices utilize as much screen estate as possible.

Today, we've got a fresh set of patents which display Samsung's plans for increasing screen real estate even more than what is currently present on its devices. The images, particularly the second set show impressive display:body ratios, raising some technical questions, such as how does the company intend to house front sensors on such gadgets. We've seen some sketchy rumors claim that Seoul is looking at methods to integrate them underneath a smartphone's display, so perhaps these images are a direct reflection of such research.

The images also resemble Apple's notched design for the iPhone X, so Samsung is well advised to keep in mind potential accusations of having copied Cupertino's design approach should it go ahead and implement these ideas. Finally, companies file dozens of patents out of which only a few get to see the light of day. While today's report can shed light on the company's potential ideas for future Galaxy S or Galaxy Note devices, do not take anything as set in stone. Thoughts? Let us know what you think in the comments section below and stay tuned. We'll keep you updated on the latest.