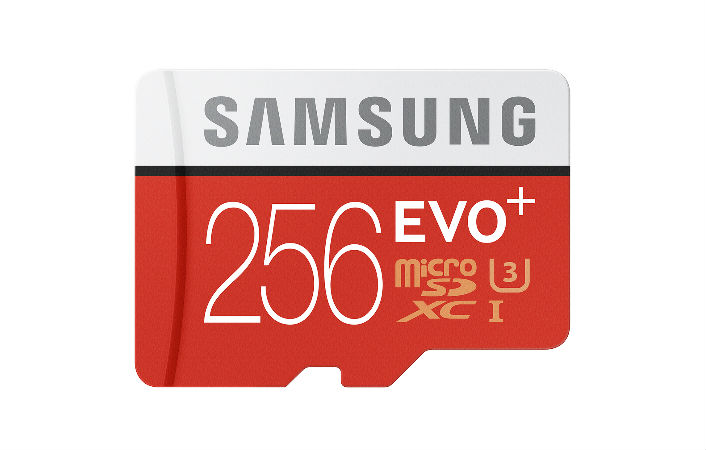 As 4K video recording becomes mainstream, it is up to manufacturers like Samsung to take advantage of such a thing by rolling out storage cards that deliver enough performance to write data being recorded at the granddaddy of all resolutions without letting the user experience any hitch in performance. The company has just announced a MicroSD card slot, and it is going to be available next month.

Samsung 256GB MicroSD Card Costs $249.99 And Has Been Made Under The Company’s V-NAND Technology

The EVO Plus 256GB offers the highest capacity for a MicroSD card in its class, and has been specifically designed for the following:

Thanks to Samsung’s advanced V-NAND technology, the new MicroSD card offers high read and write speeds of up to 95MB/s and 90MB/s, respectively. On Samsung’s press release, the following has been stated concerning the storage card.

“With the upward trend of consumers using high-performance, high-capacity mobile devices, our new, V-NAND-based 256GB microSD card solution allows us to deliver the memory card consumers have been craving. Our EVO Plus 256GB microSD card, will provide consumers with large capacity, and high read and write speeds. We are excited to offer our customers convenient and seamless multimedia experiences when they access, store and share all of the content they create and capture.”

Samsung will offer the EVO Plus 256GB microSD card with a limited 10-year warranty in more than 50 countries, and that includes USA, Europe, China, and other regions starting in June 2016 for $249.99. This will put it in direct competition with SanDisk, who not too long ago, released their own storage cards designed for the above listed gadgets and to record 4K footage effortlessly as well.

The reason why Samsung has the upper hand here is because the 128GB storage card belonging to SanDisk costs $299.99 while Samsung is offering you twice the capacity at a $50 saving, so we should expect price cuts from SanDisk in the near future.

Key Specifications Of The MicroSD Card