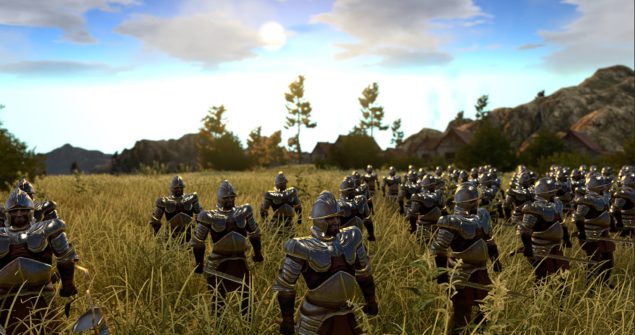 Avalon Lords: Dawn Rises will be available from April 28 via Steam Early Access. Developer Animus Interactive announced this in a press release, alongside their deal with publisher Reverb Triple XP.

Avalon Lords: Dawn Rises is a medieval real time strategy game set in the land of Spero and features a single-player campaign and multiplayer combat. In the single-player campaign, players start as a minor lord of the city of Avon, one of Spero’s five city states. Lord Lutherian has sent the player out to form a new city in a strategic and desirable part of the realm to defeat anyone seeking to claim those lands for themselves. Along the way players will meet a rising leader who seeks to unite the warring Lords under one order – The Order of Dawn.

For fans of multiplayer combat, Avalon Lords: Dawn Rises supports up to six players in all out team versus team and one versus all combat. Players will build cities and armies in Conflict Mode for an expansive military campaign of conquest.

In Battle Mode, competitors can jump straight into the action as they skirmish with friends, taking their armies into the fight for world domination.

Avalon Lords: Dawn Rises will pave the way for the MMORTS Avalon Lords, which will have unique features such as these:

Empires
Form guild-style Empires with your fellow players and their Kingdoms and hold massive battles to fight for server domination and end-game victories. Declare war or make formal alliances with other Empires as you battle for control of the map. Build roads and create trade networks with other Kingdoms and Empires. Guild leaders will have access to an extensive Empire Management system, which will include in-game calendars, player polls and remote Empire warehouse access.

End Game and Servers
Most servers will be generated with new terrain and several complex, competing end game victory conditions. When server victory has been achieved, successful players will receive exclusive cosmetic in-game rewards to carry with them to flaunt on new servers and their Empire’s victory will be written into the history of Avalon. World domination will be a tough, difficult challenge that takes at least six months and will require you to outmaneuver all other Empires, but that triumph will be truly worth celebrating. We will run at least one social server with no endgame scenario for those who just want to relax and build, in which players’ cities are protected from destruction.

We'll keep an eye on this one for sure.