Rockstar Unable To Fix The Broken Economy Of GTA Online

Rockstar is reportedly unable to fix the in-game economy of GTA Online. Rockstar launched GTA Online some weeks ago. The game had several initial bugs and server issues that were unpleasant to the players, Rockstar released an update for fixing of the issues and then announced a gift of $500,000 in-game cash for the players who suffered the initial problems.

Rockstar Is Most Likely Unable To Manage GTA Online's Economy

Managing a multiplayer game is always a very difficult task and no developer has yet been able to go through it smoothly. Rockstar is also in a mess with GTA Online. Although the game is doing very good since sever issues are fixed but it seems like Rockstar is not able to get a hold on the in-game economy of GTA Online.

Many cases of bugs and money exploits have been reported which are affecting the in-game economy but Rockstar’s response has always been the same that is, they are working on it and they can fix this. Now Rockstar’s reply to GTA Online fans shows that the situation is much more critical.

A new money hack is in practice nowadays which uses a modded PS3 console to manipulate with the game’s files and then somehow transfers an amount of $973 million in-game cash to legit console. Hackers then show a little sympathy and send money to other players. Relevantly some GTA Online fans received the exact amount of cash, but to play fair, they took the matter to Rockstar to avoid a ban or any other penalty. The reply that Rockstar made was a bit astonishing. 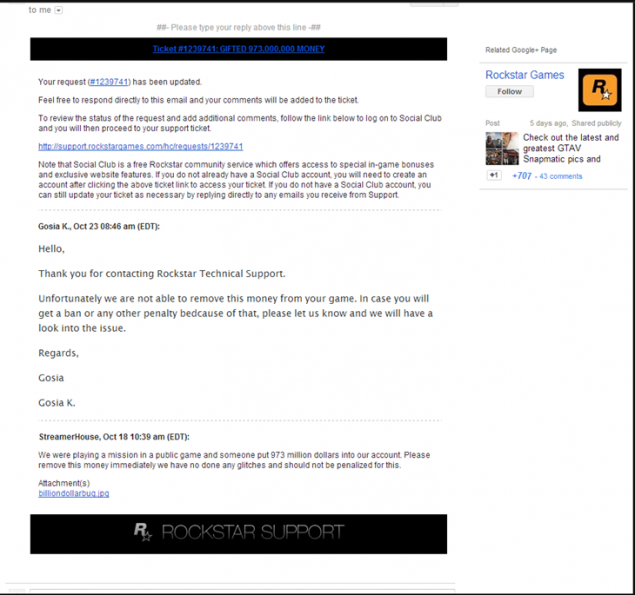 The news was posted on Reddit by the fans, they are told to wait now and contact Rockstar again if they face a ban or penalty. The in-game cash amount of $973 million that the fans now hold, if bought in terms of microtransaction costs a whooping real $20,000.  This is not a very good news for Rockstar because they had previously proclaimed that they are working on balancing the dynamic in-game economy of the game and making the game fair in every aspect. Following is the statement that was made by Rockstar after reports of initial bugs and cash exploitation.

Rockstar should take control of the problem as soon as possible because if the situation persists, it can really cause a disaster in the in-game economy and this can also harm GTA Online in serious terms.