This has been a pretty hot topic with everyone voicing their opinion of sexism in games; mostly the fact that GTA Franchise always has a Male Protagonist as its Lead. Rockstar offered the explanation that it was because the story was mostly male centric but is it really? The Fact that GTA Online will have an optional female character says otherwise.

Disclaimer: This is an Opinion piece so treat it as such. Take everything at face-value only.

So if GTA has such a Male Centric story, why  does GTA Online, an almost Mirror Image of GTA V, have a female character? Surely if GTA Online can have a story with a female lead , the main GTA storyline can too. Maybe its because of the cultural and sexist stereotypes where the machoistic male is the bad guy and females the sluts. GTA V sure seems to follow that.

Some would argue that IS the point of GTA V. Stereotypes and Cliches on top of each other but then why would Rockstar not say the same? .Infact the very fact that GTA Online has a female lead and GTA V doesn't tends to give material to the Sexism claim that plagues the GTA Franchise.

The Female Characters in GTA Online are Capable of everything in the GTA Universe.

The Female characters in GTA Online can do everything that  a male character can - from robbing banks to rambo-ing so they clearly had a female model all rigged and capable of everything. We have a feeling that because of this controversy we might as well see the following GTA games finally having a Female Lead. Here is a graph of Different Games by Rockstar and the Gender Bias in them. 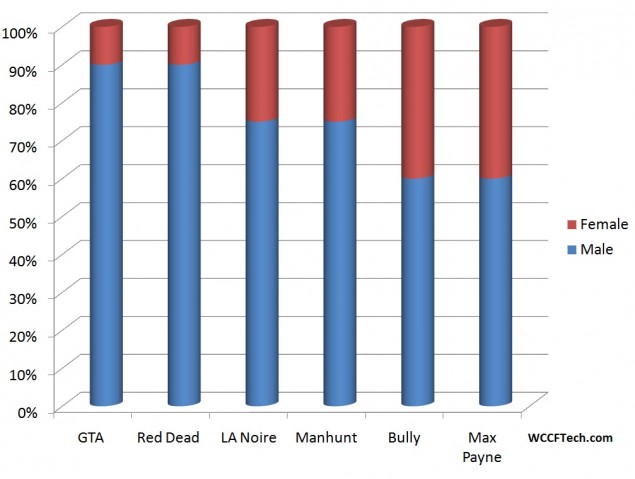 We calculated the Sexism Bias by a couple of factors: Lead Gender (Male Mostly), Story Bias to the Male Gender and whether the story could have functioned with a lead female. Surprisingly Bully is one of the least sexist games by Rockstar; with females not following the stereotype at all and being completely bad ass. Remember those hall monitors?