Rockstar is punishing anyone affiliated with the FiveM, multiplayer mod for GTA V. The mod aims to offer an advanced multiplayer environment for people to play on dedicated servers with user-made game modes.

Apart from banning the creator of the mod, Rockstar has also banned people with any sort of affiliation with FiveM.

“I am not a developer of FiveM, I am just the mere moderator of the subreddit, but yes, I have some sort of affiliation with the mod. I was skeptical that we were banned (screenshot) for being contributors (in some way) to the FiveM project.” 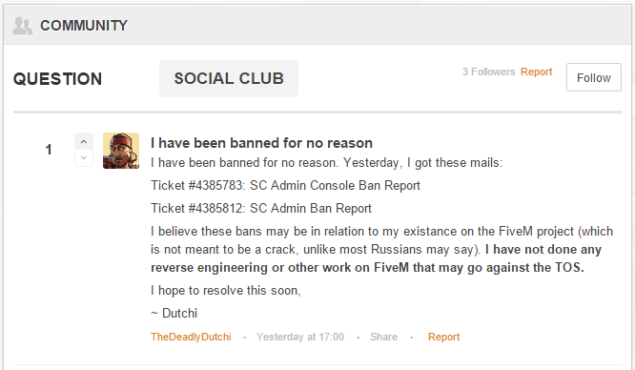 Patankar explains that Rockstar banned three other community members, even though they had not broken Rockstar’s Terms of Service or their EULA:

“They (Rockstar) have also singled out and banned community members who have not been involved in the development of the mod at all. Rockstar Games are banning people for simply being affiliated with the project – we have not broken their Terms of Service or their EULA at all. It is important to note that these three bans all took place on the same day, and two of them happened within two minutes of each other.”

Rockstar has banned these members from Social Club, which makes it impossible for them to play any games that require the service.