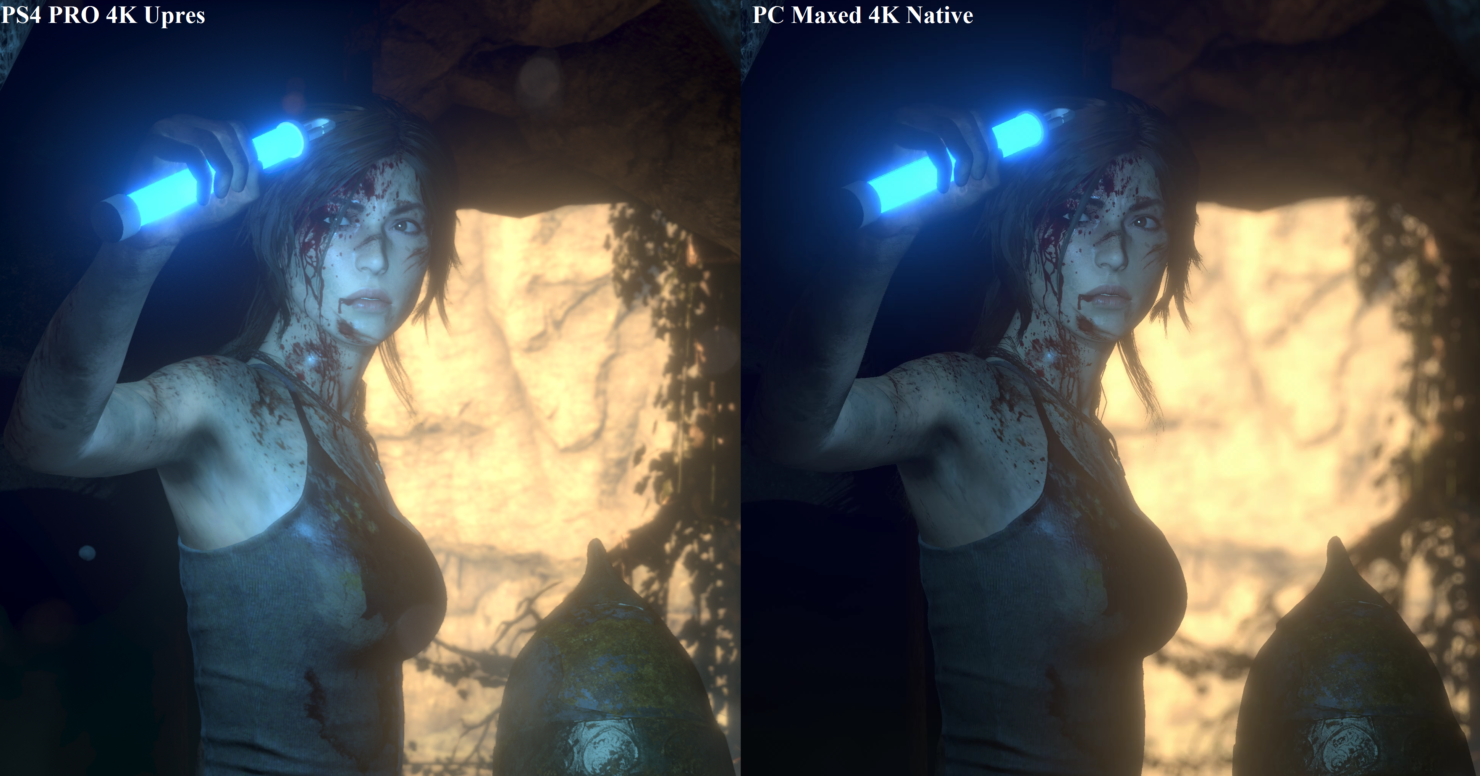 [UPDATE] Another screenshot comparison has been added below.

[ORIGINAL STORY] After the announcement of PlayStation 4 Pro and its 4K/HDR properties, it is time to start comparing it to the top of the line - PC. Square Enix is updating Rise of the Tomb Raider with several different options for owners of the new console, but let's focus on a screenshot comparison that's floating on the Web of Rise of the Tomb Raider 4K on both platforms.

As you can clearly see, both versions look very good. However, the PC version of Rise of the Tomb Raider 4K features superior shadowing (partly thanks to NVIDIA's voxel based Ambient Occlusion, also known as VXAO), textures and postprocessing (such as Depth of Field); everything just looks crisper by a fair amount.

After all, this is hardly a surprise. Given the hardware of the PlayStation 4 Pro, it will be exceedingly rare to see a game running at native 4K resolution (3840x2160); Elder Scrolls Online seems to be doing it, though we're still seeking hard confirmation from the studio, while most other titles like Mass Effect Andromeda for example will run at non-native 4K.

It's not just mere upscaling, though. As suggested by Lead Architect Mark Cerny during his PlayStation Meeting speech, Sony employed a few different techniques to bridge the performance gap. For example, Eurogamer's Digital Foundry confirmed today that checkerboard rendering is one of the custom features built in the custom AMD Polaris based PS4 Pro GPU and it will be available to developers at no performance cost.

We first reported on checkerboard rendering five months ago, when Ubisoft shared a technical document on how they implemented the technique in Rainbow Six: Siege. They called it "a good win" that allowed them to "push more quality per pixel". Also, the leaked document we published two months ago already mentioned this technique as essential to develop for the enhanced console.

In essence, game creators can reconstruct a frame buffer from half the pixels without a significant quality loss, which makes it a great fit for the PlayStation 4 Pro's otherwise limited capability to 4K resolution. Of course, compromises have to be made for a $399 box: after all, to play the most graphics intensive games on PC at 4K@60FPS you currently need the new GeForce Titan X, which is priced at $1200.

PC remains the undisputed king of graphics technology, in case there was any doubt. However, Sony is giving a great option to all PlayStation gamers who want a better experience, be it through higher and/or more stable frame rate at 1080P or through sheer graphics improvements with checkerboard 4K & HDR support.

You can take a look at Rise of the Tomb Raider 4K running on PS4 Pro in the video below.