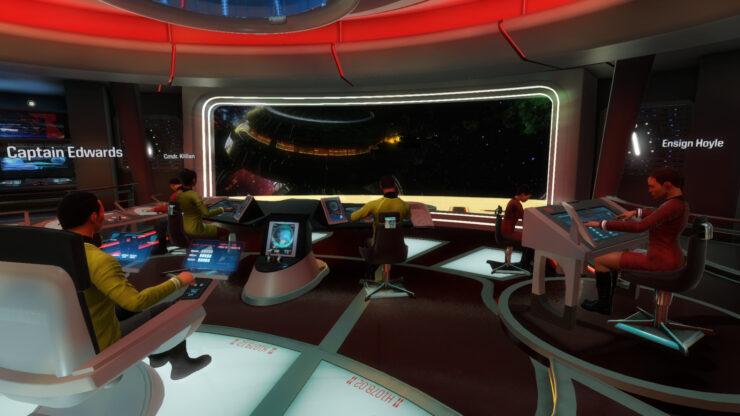 Sony's Richard Marks, head of the PlayStation Magic lab, was one of the public faces of PlayStation VR due to his team's technical breakthroughs while building the headset.

Speaking with Glixel on a wide range of VR related topics, Marks pointed out Ubisoft's Star Trek: Bridge Crew as one of the potential hits due to both its well-known IP and the co-presence factor of multiplayer.

Well, there's a game coming out very soon called Star Trek: Bridge Crew, which I think will be, you know, a lot like what you're talking about. So you can have this feeling of connecting to this huge well-known IP, and you can do stuff that would only make sense to do in VR, that game, sharing the bridge and feeling like you're there with these other people who help fly the ship, that just wouldn't be the same if it wasn't in VR. So I think it's a good use case of a well-known IP mixed together with a really good VR experience.

I actually think this network effect is gonna be huge for VR – this co-presence effect. I mean, Bridge Crew is more like that. It definitely is better with multiple people. So they are doing it. It just hasn't really kicked in yet because they're mostly single-player experiences being made, for obvious reasons.

I like to compare it to video conferencing. I think you feel more present with somebody in VR than you do with a video conference. With video conference – and that's what we were trying to highlight with that robots demo – is the spatial cues are all wrong with video conference. The people don't look you in the eyes. They look over at something, and you don't even know what it is they're looking at because you're not sharing that same environment with them. And so you never quite feel like you're there with them. You know, it always feels like they're just kind of stuck on a TV screen. Whereas you go into VR and suddenly they feel like they're right next to you. And that's a very compelling feeling.

Star Trek: Bridge Crew is being developed by Red Storm Entertainment, once known for its Rainbow Six and Ghost Recon games. The game will allow up to four players to take on the roles of Captain, Helm Officer, Tactical Officer and Engineer on the USS Aegis Starfleet ship. A dynamic storyline and the procedurally generated "Ongoing Missions" mode should provide plenty of content.

George R.R.Martin’s Work on Elden Ring Was Done “Many Years Ago”