Since the dawn of time, humanity sought to extend the natural duration of life as much as possible. While there would be some definite benefits, living forever isn't all well and good, like one single look at Yesterday Origins' protagonist John Yesterday suggests: immortality is actually a terrible burden.

Yesterday Origins (the sequel to 2012's Yesterday) puts players once again in the role of the immortal John Yesterday, a man who has lived over 500 years, and his likewise immortal girlfriend Pauline. John Yesterday's gift of immortality is rather peculiar: captured in 1481 by the Spanish Inquisition under suspicion of witchcraft, John is later saved by a mysterious priest who wants to take advantage of his ability to read and understand several languages, including the most arcane. At a certain point, John undergoes an alchemical transformation that makes him immortal, but with an annoying twist: every time he dies, his body goes back to the state when he died the first time, but he loses all his memories, forcing him to start his life anew. Things are not the same for Pauline, who underwent an improved transformation which allows her to keep her memories after dying. In Yesterday Origins, the two are looking for an artifact that will allow them to brew the correct potion so that John can come back to life with his memories intact.

Yesterday Origins' premise allowed Pendulo Studios to create an interwoven plot set not only all over the world, but also in different eras, with players finally able to learn more about John's past endeavors and how his transmutation played out. This jumping all over time and space might have led to a fragmented narrative, but that's not the case in the game, as moving from the present to the past is done in such a smooth way that it feels completely natural and never out of place. The very good writing greatly helps these transitions, as the story is quite well done and mixes occult themes, thriller and investigation elements in a way that's sure to keep players interested throughout the adventure. All characters are also likable, with their own unique charm: John and Pauline are obviously the stars of the show, but other secondary characters are just as likable, if not a bit wacky, like John's friend Boris and many others. Writing is made even better by some very dark humor that will bring a smile to most players: with Pauline's remedy for wrinkles being not an anti-age cream, but a bullet, it's impossible not to be amused by such twisted humor. There are also plenty of lighter references that are just as funny, such as the comment on Facebook potentially censoring the photo of a Nio statue showing exposed stone nipples. Yesterday Origins' writing gives the game so much personality and charm that it's difficult not to be impressed by it.

While Yesterday Origins' story, characters and writing come with some very interesting twists, the same cannot be said about the gameplay experience. Yesterday Origins is the textbook point and click adventure game, with players controlling John and Pauline, explore locations to gather items and clues, and combine them to solve some straightforward puzzles. It's very difficult to remain stuck in the game, as exploring is made easier by the hotspots system, which highlight points of interests that can be accessed by pressing a single button. There are, thankfully, some twists that make adventuring more enjoyable, such as the ability to switch between John and Pauline during specific sequences, allowing players to learn the controlled character's individual perspective on items and events, which leads to some fun discoveries, but this doesn't change the experience in any major way. The ability to check items and characters in greater detail and the extensive dialogue system, while not revolutionary features, adds something more to the experience, but don't expect to be surprised: it works well, that's for sure, but it's already been seen countless times.

An area where Yesterday Origins excels beyond any doubt is the presentation. The game employs a unique style which mixes together 3D characters with hand drawn backgrounds, which look glorious and give everything a prominent and very personable comic book style. Voiced dialogues and the haunting soundtrack also contribute to the game's unique atmosphere, always on the edge between light-hearted comedy and dark thriller. Good performance is not crucial in such a game, but Yesterday Origins also manages to deliver on this front, offering a stable 60 FPS frame rate on PlayStation 4.

Everything considered, Yesterday Origins is a nicely crafted point and click adventure game that will keep genre aficionados entertained with its thrilling tale, enjoyable characters, and humorous writing. As the genre is one of the most difficult to innovate, Pendulo Studios preferred to stick to a tried and true gameplay formula without trying to revolutionize it in any way. This choice is spot on for fans of the genre, less for everyone else. Those who never enjoyed point and click adventure games will hardly change their stance with Yesterday Origins. 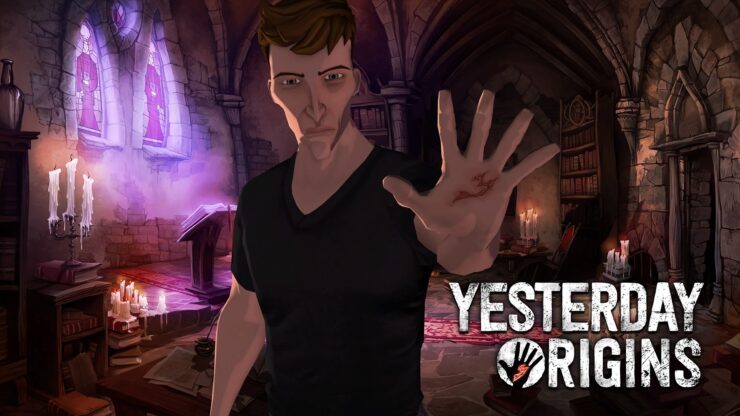 With an engaging story mixing together thriller and comedy elements with occult themes and plenty of dark humor, as well as some interesting characters, Yesterday Origins is a point and click adventure game that fans of the genre will surely appreciate. With the gameplay formula not straying too far from familiar ground, however, the game developed by Pendulo Studios will hardly appeal to those who don't enjoy this classic genre.

Yesterday Origins Delayed until November 10th Due to Manufacturing Delay