When freesync monitors began floating out into the market I saw it as the perfect opportunity to give entry level to mid-range pc gamers the ability to have an even better gaming experience without having to break the bank by being charged a premium and having a wide range of options in front of them.

With the first wave of monitors we began seeing larger format monitors with sweeping freesync ranges all the way up to 144hz and a couple ultra-wide models as well.  What we did not see however was something I feel a lot of people were hoping for in terms of affordability.  Yes, these new monitors did come to market much lower than their G-Sync counterparts but were still out of range for the entry level to mid-range gamer who is spending $120-$200 on a graphics card.  This seems to be a segment left unrepresented in the variable response rate (VRR) space.  ViewSonic appears to be trying to change that mindset with the offering of the VX2457-MHD a sub $200 24” 1080p Freesync capable monitor that even boasts a higher than 60hz refresh rate.

Something interesting is that even ViewSonic is a bit light on the details with the monitors in the VX line reserving only a small blurb in their press release;

But they were kind enough to send us a unit to take a look at and share our experience with you.  We requested the 24” model as we felt it best represented both a good size for 1080p as well as a good value with a current price of $169.99 on Amazon. (at the time of publication)

The box comes fairly uneventful as a cardboard box with a handle and the information for the monitor in several languages.  Interestingly enough the box lacks any graphics or designs even tipping off someone looking at in a store that Freesync is even present; it is mentioned in the features list but no mention of the freesync range of 47-75hz.

Included in the box are

Starting with the panel itself we were glad to see it features a nice anti-glare screen, unfortunately it’s surrounded by a piano black finish.  Just under the ViewSonic branding is a plastic extrusion that glows with the power/indicator light 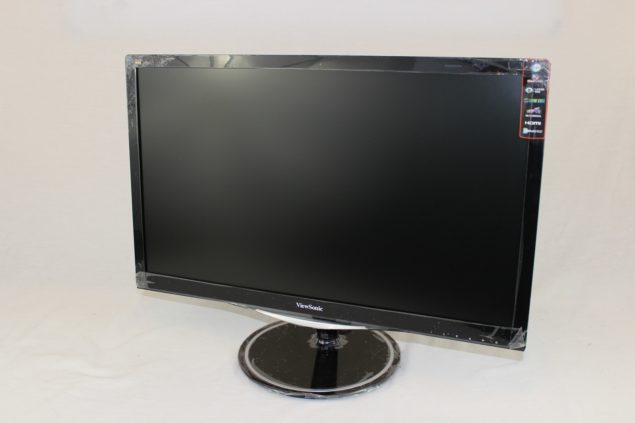 The rear of the monitor sports the 100x100 VESA mounting on another piano black finish, a little confusing as the user won’t likely see this area.  The built in tin can speakers are located on the Top of the VESA mounting area. I like that they were able to provide speakers on this monitor at this price point, the problem is the quality isn’t that great and they’re top firing instead of down firing which is a little off from then norm. 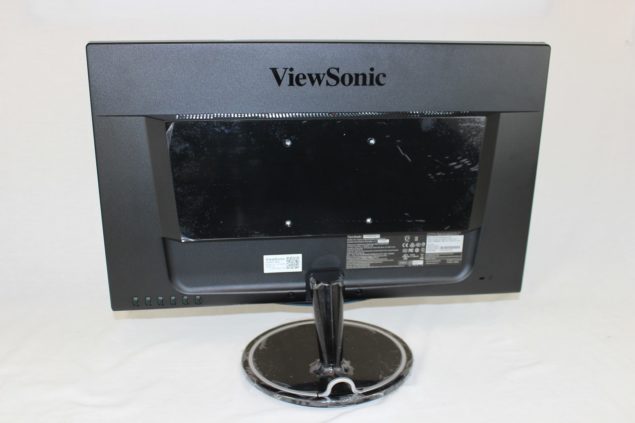 Along the bottom of the rear of the monitor are the control buttons and the power plug, which interestingly enough doesn’t utilize a power brick but a regular PSU style power cord.  The other side of the monitor’s rear has the I/O that features the DP, HDMI, VGA, and audio in/out ports.

The base of the monitor receives very little fanfare.  Here you find more piano black finish to collect scratches with a silver ring that ends in the back as a cable management clip.  The cable management clip is a good addition but having to unclip it to move a cable makes me wonder how long it will last before if breaks.  Adjust-ability is limited to tilt only, but is expected in this price range. 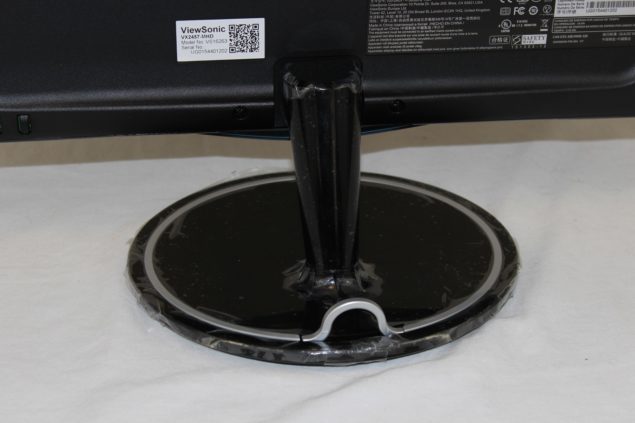 The OSD included with this monitor is easy enough to use, when connected via DP most of the control is relinquished to the PC itself.  The biggest issue with using the OSD for me is actually the button location and navigation using these buttons.  The navigation is a bit cumbersome until you learn from touch where the buttons are for which on screen action.

Something very important to note is that freesync must be enabled on the monitor itself before you are able to use it from the driver side.

Light bleed on this monitor is at an acceptable level for a TN Panel and never became an issue while gaming.

I do not have the proper equipment to test the color calibration claims.

Using the Lagom viewing angle test reveals that the viewing angle isn’t the best in the world, which is to be expected from a TN panel.  It’s not bad by any means and using the monitor daily for three weeks before I sat down to start taking notes I never experienced it as a problem whether I was web browsing, typing, or gaming.

The cherry on top of this monitor is the inclusion of freesync, which you’ll need to source your own DP cable as ViewSonic didn’t see it fit to be included.  The range may not be the widest with a range of 47-75hz it still offers a greater than 60hz refresh at this price point is impressive.  We used this monitor in conjunction with our R9 380 that is able to run games at high-ultra settings and stay in the window with ease.  During our look at the R9 380 we found Dirt Rally’s min/avg to stay within the window and offering an excellent gaming experience.

In terms of dipping out of the freesync range and the jarring experience that is being reported, it’s there.  The break between being in the freesync window and dropping below it is noticeable, but mostly going from the abnormally smooth delivery of frames to now dropping out of that.  The best way to explain it is a change in texture as you run your finger across a surface, it may not seem that big of a deal, but you can really feel the difference.

Speaking of freesync and smooth, I found that with this monitor the best way to experience freesync is to enable freesync, turn on FRTC (frame rate target control) and keep the Target at 75fps, then enable vsync within the game.  The reasoning behind this is because, even with freesync enabled, there is still a slight amount of tearing in game, but vsync + freesync eliminates the input lag as well as killing all tearing throughout the freesync range.

Onto the subject of ghosting, it’s there.  This monitor has a bit of ghosting that is visible, but also able to be caught on camera.  Is it distracting? Not to me, but something to be considerate of if you’re looking into this monitor.

So in the end can ViewSonic bring freesync to a wider audience with the VX2457-MHD?  This is a good monitor for the price; it’s not much more than a non freesync monitor in its class.  Even if the freesync isn’t enough to sway you the 75hz is a very welcome addition to a sub $200 monitor.  The piano black finish rubs me the wrong way, but that’s a subjective matter and won’t affect the overall opinion of the monitor.  The lack of a DP cable is much more of an offense than the finish, if you’re selling a monitor with VRR as one of the selling points don’t make your customers have to seek out their own DP cable.  The truth is this monitor paired with a Radeon R9 380 can be had for around $350 and deliver and excellent gaming experience and carry you past the 60hz standard.  Something worth considering if you’re in the market.