In the year 1935 CE, two Europan superpowers were on the brink of starting the Second Europan War. The commonwealth of allied states known as the Atlantic Federation filled the west of Europa with the Europan Imperial Alliance, or Empire for short, dominated the eastern half of the continent. Both superpowers’ economies were driven by a precious ore known as Ragnite, a crystal that’s analogous to Petroleum from the modern world. With its superior military prowess, the Empire uses its momentum and military advantage to press forward in an attempt to bolster its stocks of Ragnite and invades the neutral Principality of Gallia, home of young Welkin Gunther, son of a decorated war hero, and Alicia Melchiott, leader of  the town watch and baker by trade. From there, the duo is thrown into a world filled with war and the horrors it brings to both sides of the battle. 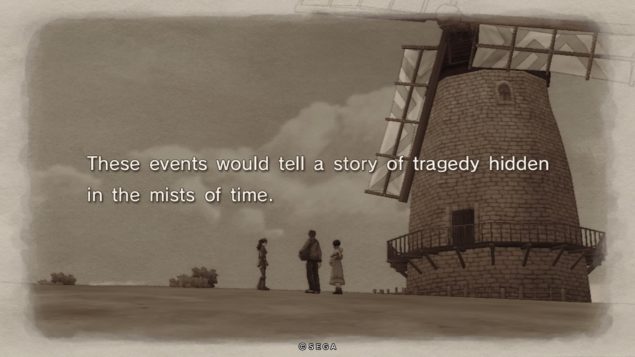 With a ragtag band of recruits and other young (and well-seasoned Largo) military hopefuls, Welkin leads the military group known as Squad 7, a name that’s sure to be recorded in Europa’s history books. From small-scale skirmishes to repel the Empire from razing Welkin’s hometown to full-blown tank warfare, there’s a wide breadth of military campaigns to engage in. 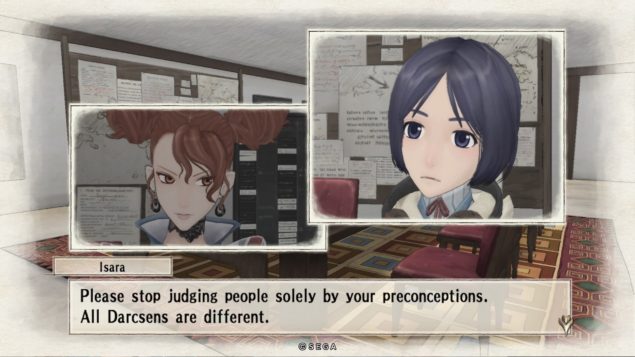 At times, the story dips into some very realistic themes only to remind the player that they’re in a world where rocket-propelled lances are the most effective way to destroy a tank and legendary Valkyur once dominated the battlefields. There are a large amount of side stories and moments that help counterbalance the stressful moments of warfare (and prejudice against the dark-haired Darcsens) with short one-off skits and light hearted character development. There's a unique warmth to knowing that the burly lancer that’s racked up the most number of tank demolitions in the squad secretly wants to become a vegetable farmer once the war is over.

One simple fact can’t be argued: Valkyrie Chronicles Remastered looks much better than it did on PlayStation 3. SEGA’s Canvas Engine draws the world with a style reminiscent of pencil-drawn paintings  The Playstation 4’s higher resolution offers the clarity to finally see the vibrant detail of the characters how the CANVAS Engine was meant to portray them. I’m still impressed with the engine’s unique edging style, giving the designs a rougher detail as they reach the borders of the screen until they exist as rough pencil outlines. It’s a style I personally wish would be utilized in other games beyond just an unlockable graphic filter for Katamari Forever, especially as developers strive higher and higher for new artistic styles in the gaming medium. 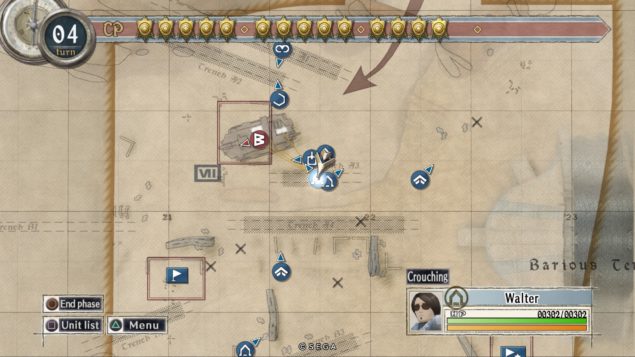 Beyond just a tactical push used by the Germans in World War II, blitz (or the stylistic BLiTZ) represents the acronym ‘Battle of Live Tactical Zones.’ Valkyria Chronicles Remastered’s unique BLiTZ combat system stems from deploying units from an overhead strategy map. Selecting one of Squad 7’s heroic servicemen (and women) brings the action down into a third-person, over-the-shoulder perspective. From there, units can move freely across the battlefield according to their class’ movement rates and perform a single action each attack once in range. Shooting at an enemy, staying true to some RPG roots, is a battle of contending with effective weapon ranges, invisible dice rolls to hit, and weak points easily represented by glowing blue Ragnite power sources or the enemy’s head. All of the information is presented to the player in a simple reading of how many shots it would take to kill a given target if they all hit their mark. Each and every weapon in Squad 7’s armory has a circular reticule to mark the broad margin of error. Even the most accurate of snipers seated atop a perch might miss their shot even with a crosshair fully lined up on an enemy scout’s head. 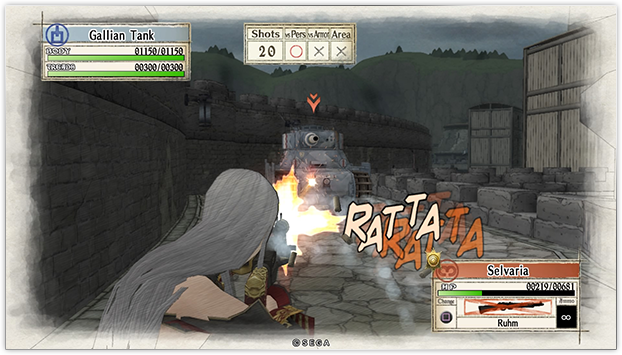 More often than not, Valkyria Chronicles Remastered stays true to its initial debut on the Playstation 3 nearly eight years ago. Tactics that worked once still hold true and the same approach to battle can be neatly replicated without any changes. Grinding skirmishes for an extra EXP advantage can be accomplished with the same approach of using scouts to charge in and occupy the enemy bases in the shortest number of turns. 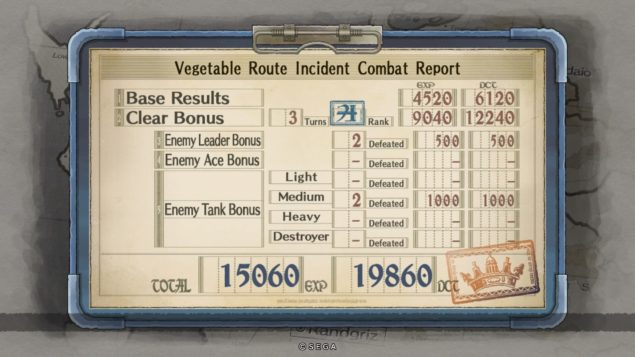 Striving to achieve an A rank (the S ranks from the original Japanese PS3 release have all but disappeared) in every mission remains one of Valkyria Chronicles’ toughest challenges. Players aren’t judged based upon accuracy or number of units defeated for their ranking, but rather their efficiency. The difference between getting an A rank, complete with its rewards of extra EXP and money as well as working towards one of the hardest trophies in the game, and a B rank is merely the number of phases that the player takes to finish a given mission.

With the inability to replay key story missions during the first playthrough of Valkyria Chronicles Remastered, players might feel the need to play each mission perfectly for that elusive top rank before continuing on into the story. I personally was guilty of using at least four or five save slots per skirmish just in case one of my lancers missed a crucial shot or an errant enemy scout ran up and took out my lone sniper. The satisfaction of earning the Randgriz Crest of Honor was its own reward complete with a Playstation 4 trophy that was available for the first time in the series. 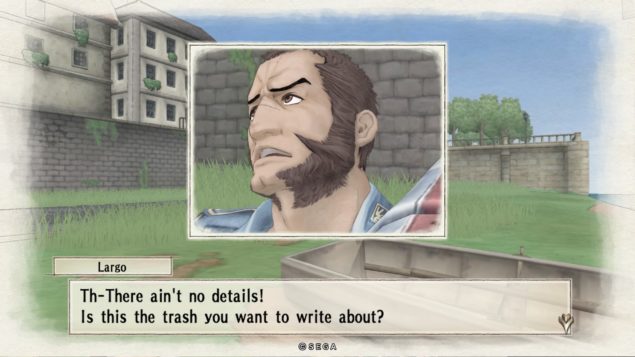 Some players might have skipped over the original release of Valkyria Chronicles on the Playstation 3 due to the lack of trophy support. As Valkyria Chronicles was released before the mandate of trophies, many thought the game would’ve received a patch that never came. With the Playstation 4 release (and PC release in 2015), the set of in-game Medals that are awarded for exemplary combat prowess and service fill the PS4’s trophy list with every challenge from the original game. Despite the addition of DLC from the original game (Behind Her Blue Flame and Edy’s Mission) being incorporated into the main game, the platinum trophy can be unlocked without playing through the additional content. Playing through the extra missions is a unique challenge, especially with bonuses such as the all-powerful Ruhm from finishing all four of the Selvaria missions. 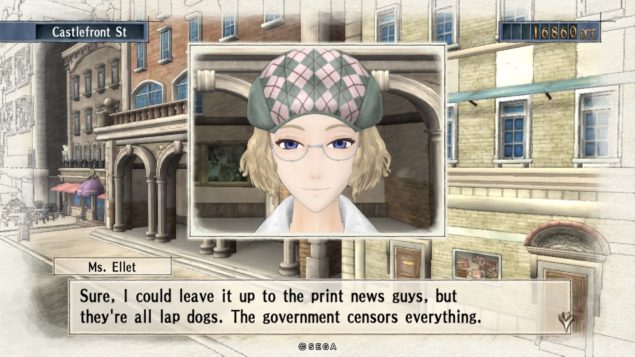