There are few games that feel like they've truly taken advantage of the current generation of consoles. The Witcher 3 definitely leads the pack, with most other titles failing to push beyond the safe confines of 'better graphics' and 'more stuff on screen'. Uncharted 4 is in the same category, but that's not the only reason it will be one of the most important games of the next few years.

It takes everything that was great about the PlayStation 3 trilogy, and it builds on it. It shakes up the formula without ever abandoning its roots. It's darker, with a far deeper narrative, but it doesn't for one second get away from the character building one-liners and comic observations that made the franchise one of the most beloved third person action series ever.

What The Last of Us was as the fresh beginning of a brand new universe, Uncharted 4 is as a conclusion to a world gamers have loved for nearly 10 years (the first Uncharted released in 2007).

It's no coincidence that The Last of Us comes to mind when discussing this game. It is obvious that Naughty Dog have learned from their time with Ellie and Joel and of course, the directors (Bruce Straley and Neil Druckmann) are the same. The set-pieces are fewer and further between and every significant section of action can be completed with stealth if you choose.

For some, this might be a step in the wrong direction. The pacing seems slower, with more sections when you're walking through an area, soaking up the atmosphere. It works for a couple of reasons. Firstly, every location is beautiful and you're kept distracted by a barrage of wonderfully written dialogue. Secondly, after completing a chapter you can choose encounters, rather than just levels, and so can skip getting too familiar with each slower segment.

But when things do start to happen, they're by far the most interesting set pieces of the franchise. Things really go to hell whenever the famous Nathan Drake turns up, and the power of the PS4 really brings that to life. He still walks away with a slight limp and a nervous laugh, but it doesn't change the fact that an ancient building just fell around his ankles.

I'm going to go ahead of upset a few people here by saying that I still believe - for the most part - that Uncharted 2 had the better story. But, again like The Last of Us, the story is just a means of getting from area to area. The dialogue, the character interaction and that unique Naughty Dog way of having the characters comment on their situation and talk about nothing is what makes the journey so sweet, and that is a big improvement over any of the PS3 titles.

Naughty Dog seems to have gone through the whole game, pre-empting the things that might happen and then writing dialogue for it. I can't think of another game outside of some of the more in-depth RPG and point and click titles, that has so much reaction to the dumb things players do.

And part of what makes that special is that, if dialogue gets interrupted for whatever reason, one of the other characters will later say "oh, what were you talking about?" and the conversation will pick off from where it stopped as naturally as possible.

It helps that you're learning a little bit more about the characters you've come to love over so long a period of time. There's definitely a bigger focus on building up a back story, and that helps give the impression that there's more going on. Older characters get a more detailed showing, while newer characters fit right into the new atmosphere perfectly.

When you finally get into a fight, there are a couple of ways of approaching it. A lot of the bigger areas can be tackled with stealth, but it's not exactly the perfect package for doing this. Stealth is definitely doable, but it doesn't usually feel very rewarding and it's certainly harder than just shooting your way through. It doesn't help that the stealth system is quite minimal, with white bars filling up, becoming yellow for 'suspicious' and then going orange when you're caught. You can hide in the beautifully animated long grass to avoid being seen.

The stealth system does its job, but it feels like an additional option in a game that at its core is still action based. It does Naughty Dog a lot of credit that it wasn't very long ago that tacked on stealth was a stereotype of almost every bad game going, and yet here it is done satisfactorily without missing a beat.

On the other hand, you can just blast your way by shooting and be perfectly happy doing it. This feels like the best action in the series. There's more weight to it, and the enemies are more intelligent and the aiming much better. And because the enemies are fewer and further between, you come to appreciate the risk of each encounter all the more. You're no longer killing a thousand heavily armored people in the jungle and then watching a cutscene where Sully and Drake hesitate over a gaggle of guys with pistols.

The cover system is much the same as you remember it, with a few minor changes. Your protection is much more likely to disappear as you stand there, as the environment is much more destructible than before. We're not talking Red Faction, but it's a nice new feature that majorly changes the way you have to think about where you stand and when you choose to take a shot.

One of the few letdowns Uncharted 4 offers is in its melee combat. If you're not using the one-hit takedowns of a stealth move, you might as well not bother. The counter move is gone and you're instead expected, as the game tells you, to roll out of the way of punches. Just like real life, eh?

Instead triangle is used to break free from holds and nothing else. There's some neat animation when an ally can help you fight, but overall the system is very disappointing.

Uncharted 4 seems to be significantly longer than previous entries in the franchise, and that means each chapter can be a little more in-depth. Satisfying isn't the right word for the entire experience, which is everything a fan can hope for.

After finishing the story and mopping up some of the more frustrating trophies, you'll want to jump into the multiplayer. It's great fun, best described as The Last of Us without the stealth. Like in the main game, there's a definite weight to it that wasn't in previous multiplayer modes, and it's well worth checking out. So far - only a few days after launch - it's fully populated and great fun.

It's also a nice way to revisit characters that didn't or couldn't have come back into the story. Each multiplayer character has full voice acting and a new PlayStation 4 sheen.

In fact, the sound design is superb throughout the entire game. Uncharted 4's voice acting is as natural and great as you might expect - far beyond almost anything else gaming has to offer - and the sound of footsteps, water running and the echo of long forgotten caverns is exactly what you'd expect.

Actually, let's take a moment to reiterate how amazing the voice work is here. This isn't a game where the voice actors speak up when they need to offer a hint or let up another bit of story. There are domestic scenes here, there's banter - these are all handled perfectly by every character. It could have so easily gone wrong, but it never does.

And that leaves us to talk about the graphics. They're obviously stunning. There are no jagged outlines, nor white lines around a body. Technically, it might not be the absolute best out in the industry - that can be left to some of the more powerful PC games - but in terms of design I'd say this is a top five contender. The landscapes are stunning, and keep topping themselves. You'll see things in the first few chapters that'll leave you open-mouthed, and yet it just keeps getting better.

Part of the improvement over the previous games is in the draw distance. Naughty Dog have become free to experiment with space, and boy have they experimented successfully. You can see for miles, whether it's thick, lush jungle or dense residential areas; it's awe-inspiring.

Up to the point where you see some cows, or a car or boat on the horizon. When they've tried to put things in the distance, it universally looks awful and throws you out of the atmosphere a little bit. It's like someone's put a Looney Tunes sticker on a beautiful landscape painting.

But here's the thing, it's easy to nitpick over Uncharted 4, because it does everything it needs to do better than right. Naughty Dog didn't just go through the paces with this game, they worked hard to make the best game they have ever created, and the best action game this generation.

Review code provided by the developer. 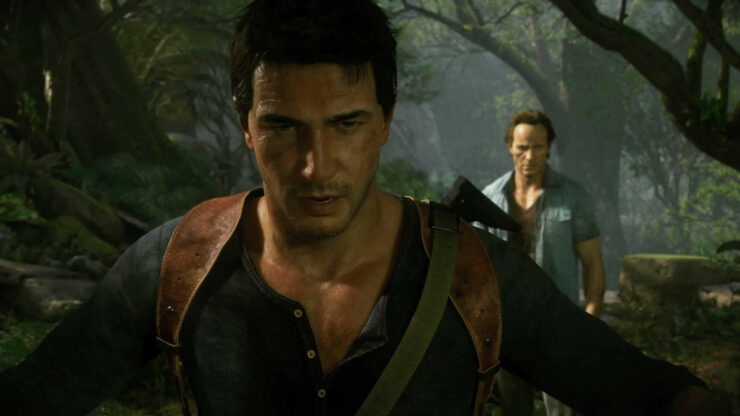 With Uncharted 4: A Thief's End, Naughty Dog have created their very best game and one of the best titles of this entire generation. If you own a PlayStation 4, you simply need to play it and if you don't, this is certainly a good reason to purchase the console.