2016 has seen a recent surge in visibility for the Touhou franchise. Birthed from the mind of one Japanese man (ZUN) and spun into a multimedia empire, the Touhou series has been transformed into animation, music, and fan-developed games. As the third fan game to be announced for a North American release at E3 2016, Scarlet Curiosity is a rather curious attempt to draw attention to a series which has only recently been introduced to the series with the fourteenth mainline title released last year.

Touhou: Scarlet Curiosity’s emphasis on action and swordplay gives it a feel closely resembling Nihon Falcom’s Ys series. In a time when North American gamers still have to wait to ever hear word if the eighth numbered Ys series will leave Japan, a light substitute is certainly in order. Much like Adol’s numerous adventures, both Remilia and Sakuya can jump, slash, and put their dexterity to work in combat encounters ranging from hordes of fodder enemies to series veteran bosses. A unique combo system can both increase the heroine’s damage output and chances for new loot. 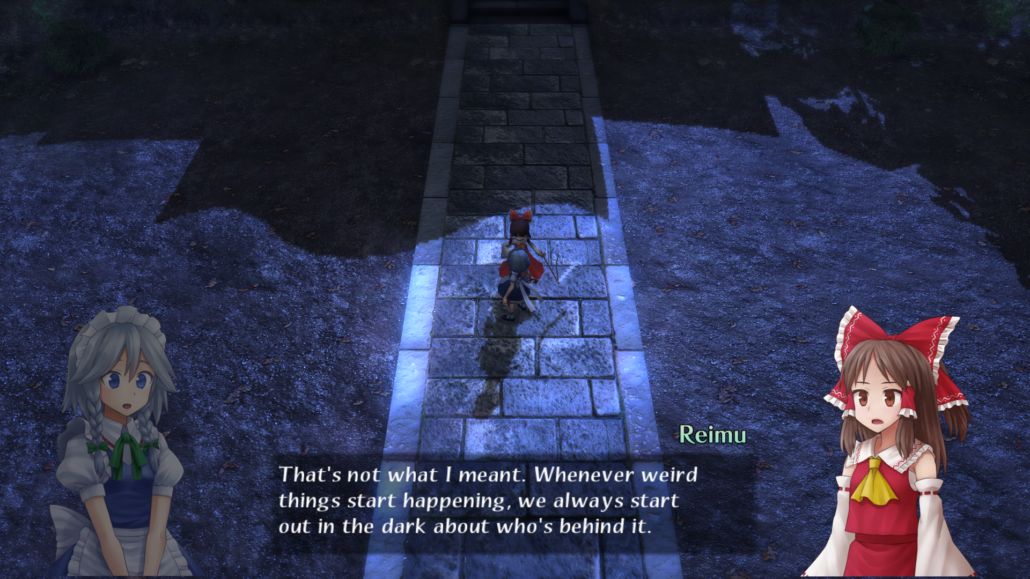 Where Scarlet Curiosity’s combat truly shines is during the boss fights. Taking a great deal of inspiration from the mainline Touhou series, the few boss encounters that Remilia and Sakuya face are littered with spell cards and screen-filling attacks. True to Touhou, evading these attacks with grace and launching counter attacks just in the nick of time are paramount to surviving. Most of the boss fights the player must endure are generous with destructible pots that offer a chance to recover at least a sliver of life but that largely exists as a handicap for those that eat one too many bullets in a barrage.

Fans of loot-driven RPG’s with randomized items to wield will find plenty to collect in Scarlet Curiosity. As Sakuya’s stats don’t directly increase when her levels do, it’s important to keep one’s gear up to par. With three different inventory slots to gear up and a large number of stats to juggle, knowing what to prioritize can be completely crucial. Would you go with a weapon with higher attack but never strikes a critical hit, or perhaps use a different knife that unlocks a unique attack skill but might decrease the percentage of items drops. Touhou: Scarlet Curiosity is never stingy with the loot and those that enjoy grinding away for bigger and better loot will constantly find new pieces to keep the cycle going.

With no selectable difficulty settings (or many other options to tweak in general), Scarlet Curiosity is typically on the easier side of difficulty, save for those boss fights. For those looking for a deeper challenge, a multi-floor post-game dungeon offers some of the best loot and enemy encounters in the whole game. In fact, I’d dare say that the extra content just after the ending credits first roll is substantially better than the game’s storyline. 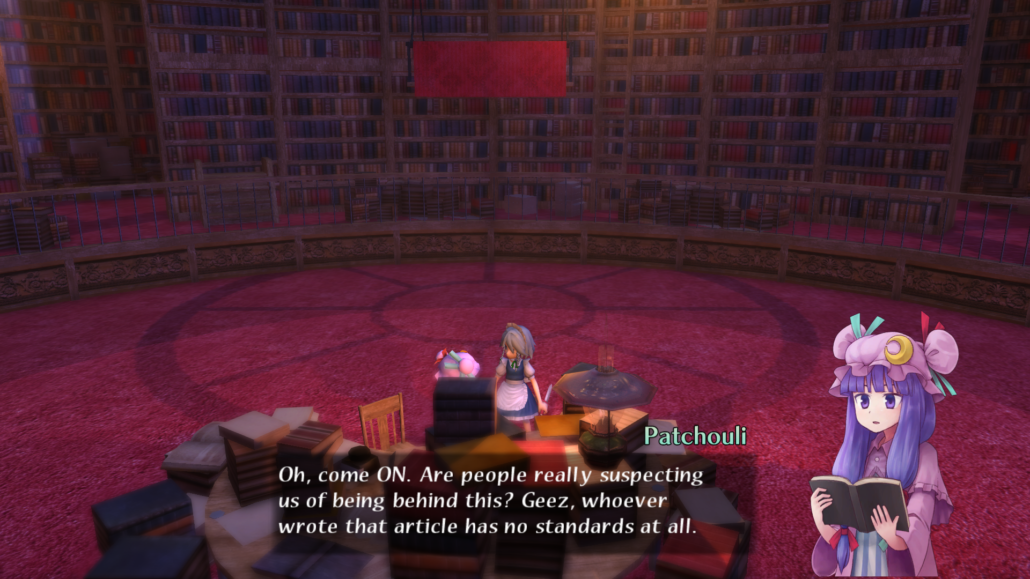 Deep down in the Scarlet Mansion’s furthest floor hides the single most demanding fight in the game and one of the few boss fights that lasts more than a couple minutes to see through. This secret cameo character’s attacks can knock the player out in only a couple quick seconds and requires a deeper mystery of Scarlet Curiosity’s mechanics than anything else. Their true power is evident with a bonus secret where they can briefly be playable if the player revisits the Scarlet Mansion’s entrance after completing the adventure.

If someone was to ask me about what makes the Touhou series so memorable, I would answer the music every single time. More than the characters or colorful bullet patterns, it’s Zun’s original creations and the fan remixes that held my interest in the series. Touhou: Scarlet Curiosity boasts a diverse selection of remixed tracks for each dungeon and every individual boss fight in the game. However, some of these tracks are better suited for the adventure than others. At times, the music would be ill-fitting and rather hit or miss depending on where in the game it took place. Thankfully the creators picked a great remix of Flowering Night (Sakuya Izayoi’s stage theme) to take place during one of the most intense boss fights in Scarlet Curiosity.

Touhou: Scarlet Curiosity does have a number of rough edges that still haven’t been completely polished up since the title’s PC debut at Comiket 86 two years ago. Large expansive environments give a playground to run around and attack but enemies are scattered about in smaller groups. This gives a lot of downtime when trying to make one’s way towards the next checkpoint. Another quirk that hasn’t changed is the strange palette of colors Scarlet Curiosity uses to color the world. In one specific cavernous level, there’s a light blue hue all over the place. When playing as Sakuya who naturally has a blue costume, I frequently found myself losing track of where she was during some of the more tense fights.

The controls on Playstation 4 are another rough spot for Scarlet Curiosity. There’s a loose feeling to navigating the few mandatory platforming sections that can be a tricky affair. Jumps can feel quite floaty which work well for hopping over enemy bullets and attacks but the more precise platforming segments require some last minute wiggling to land properly.

Touhou: Scarlet Curiosity is certainly a curious affair on the PlayStation 4. On a console that hasn’t seen a mainline Touhou title before being released in a territory that hasn’t seen the official ZUN-developed Touhou titles either is a bit of a strange anomaly. The popularity of the series has certainly bloomed in North America over recent years, especially for its music, and established fans are surely looking for whatever Touhou titles they can get their hands on. This is a rare example of a game developed purely by the fans, for the fans. While Scarlet Curiosity is certainly geared towards fans that already know a little bit about the Touhou lineage, those looking for a fun little diversion until Ys VIII reaches North America won’t be disappointed.

Review code provided by the publisher. Game available on PlayStation 4.

While Scarlet Curiosity is certainly geared towards fans that already know a little bit about the Touhou lineage, those looking for a fun little diversion until Ys VIII reaches North America won’t be disappointed.