NIS America has been steadily growing its roster of Touhou spinoff titles, each bringing the bullet hell titles into new and varying genres. Their latest release, Touhou Genso Wanderer transforms into a roguelike RPG and even includes a second title, Double Focus, for those that pick up the first batch of copies. Arriving on both the PlayStation 4 and Vita systems, we opted for the Vita release, with previous roguelike RPG’s being a perfect fit to take on the go. 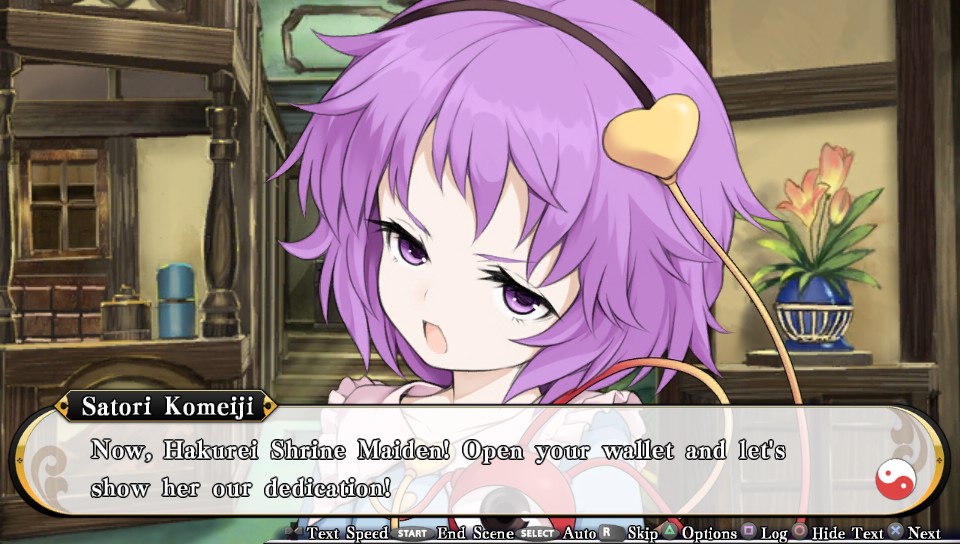 In Touhou Genso Wanderer, players take up the role of series protagonist Hakurei Reimu, a shrine maiden that’s always looking for treasure and donations. After some mysterious circumstances transform one of Gensokyo’s famed item shops into an ever-changing tower filled with loot and cloned copies of Genskyo’s citizens. Those that follow the doujin scene might recognize this Playstation RPG as a series that’s been developed by Aquastyle exclusively for the PC for quite some years. Genso Wanderer is actually based upon the third Fushigi no Gensokyo title with some added tweaks for consoles. Of course, Reimu’s adventures aren’t limited to just the single tower; a great number of additional dungeons are accessible as the player advances the story.

Fans that might have played the likes of Shiren the Wanderer or Pokemon Mystery Dungeon series should feel familiar with Reimu’s spelunking efforts. Starting each adventure at level 1, players will move space-by-space through a network of randomly generated rooms and discover various forms of loot and evil denizens. No two runs through the Kourindo Tower will be the same, although certain floors might have special towns or set pieces that are guaranteed to show up. 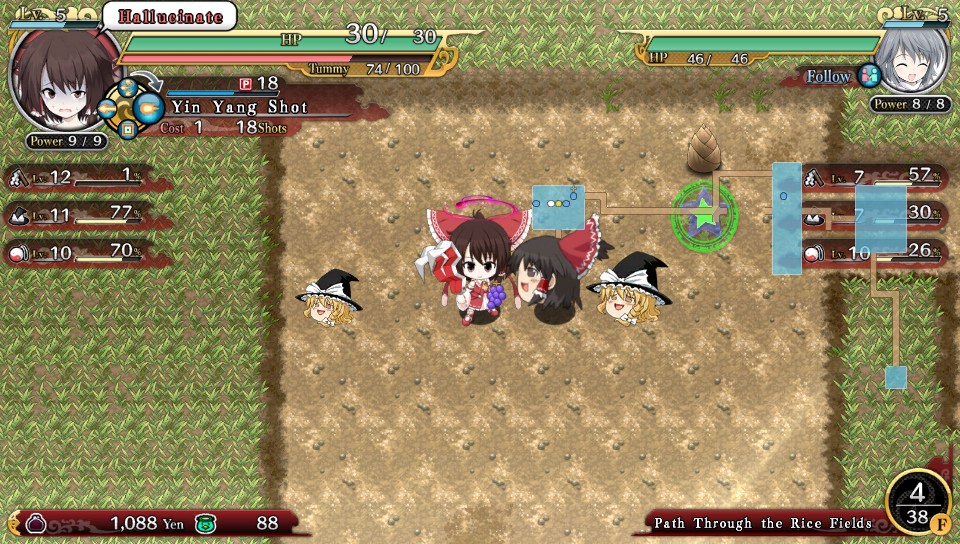 Turn-based roguelike RPG’s have operated under the same basic rules of ‘player takes a move, then everything else moves’ with few exceptions in the past (Crypt of the Necrodancer, for example). Touhou Genso Wanderer takes the framework of previous roguelikes, keeping the important aspects that fans enjoyed most about the genre and infusing some new conventions. A new i-Dash (Intelligent Dash) mechanic helps to speed through empty dungeons and navigate through labyrinthian hallways or step around marked trap spaces. As players delve through the dungeons, a special currency called Nito Points can be accumulated and cashed in towards item fusions (something that’s regularly limited to blacksmiths or unique items in order to combine two weapons’ enhancements) or other forms of alchemy.

Part of what makes the roguelike genre so appealing is in its efforts of trial and error to experiment with unidentified gear or consumables. There are a number of additional dungeons that have their own sets of rules for tackling, including all unidentified gear or the inability to bring any items into the dungeon (meaning no quick escapes with high powered gear unless you’re lucky enough to clear the dungeon or pick up a Return-to-Hakurei Jump). The main story dungeons are much more forgiving, though. Not only can you typically bring along as much gear as you like (having a weapon with +99 attack is quite handy, after all) but a death usually won’t mean losing all of your progress. I can’t count the number of times I died to my own carelessness, but each time, I’ve been sent back to the Hakurei Shrine with only a bruised ego and losing whatever cash was in Reimu’s wallet. 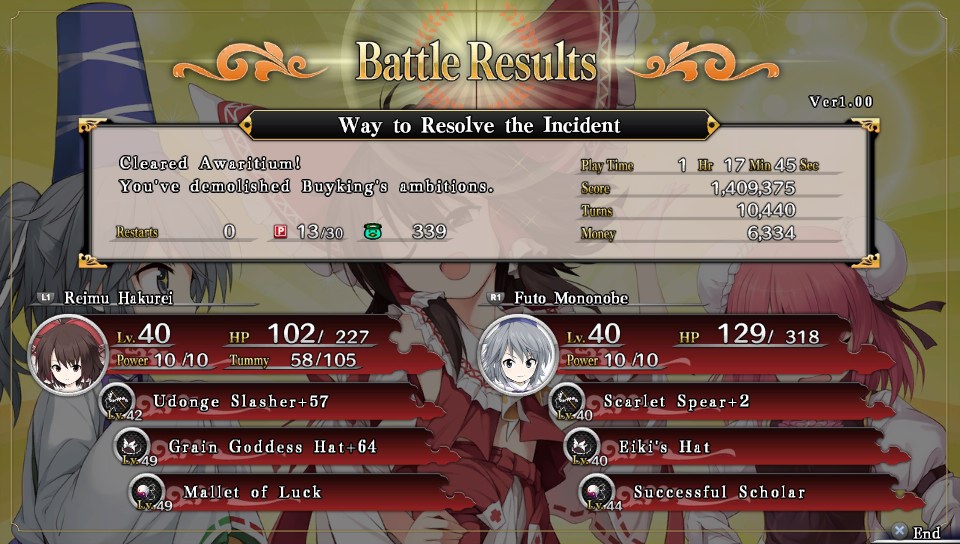 While the main story dungeons might be somewhat of a cakewalk as players learn the mechanics or bring along a maxed out set of weapon/shield/accessory, the additional side dungeons each play by their own ruleset and typically require the players to salvage whatever unidentified items they can come across. There’s a nice balance between areas that are too easy and too difficult and players that might only want to enjoy a relaxing Touhou experience can play their way through the story without getting overwhelmed by the more difficult stages.

Despite being a doujin, or homegrown, title, Touhou Genso Wanderer has a surprisingly high level of detail in its presentation. All of the story characters have well-animated portraits and there’s a surprising amount of voicework that other roguelike titles simply don’t match. I daresay that Genso Wanderer both looks and runs better than last year’s proper Shiren sequel on the Playstation Vita.

Reimu’s adventures in Gensokyo aren’t the only thing that players can look forward to when they pick up Touhou Genso Wanderer. A full secondary game, Double Focus, completes the package with a completely different style of adventure. Rather than playing one of Gensokyo’s famous magicians, players instead take part of a two-person team between anthropomorphic dog Momiji and crow Aya on a sidescrolling adventure through a mysterious book. 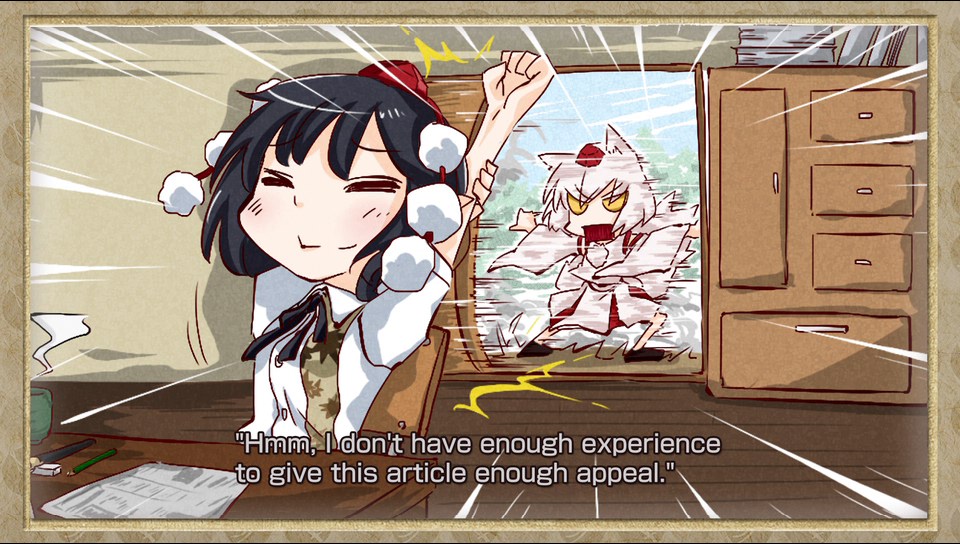 Initially, I was more excited to play Double Focus than Genso Wanderer as my fondness for the contemporary Castlevania series is no secret. Switching between two protagonists was a mechanic that was only seen in Portrait of Ruin but fit the title nicely. Sadly, there’s something to the artificial difficulty spikes (typically due to the high amount of damage that Aya and Momiji suffer) and sluggish movement that leaves much to be desired. As a free title bundled in with Genso Wanderer, Double Focus is certainly worth a look but it’s most certainly the weaker of the two doujin titles on display.

The Touhou series continues to surprise me with the diversity of titles that doujin circles can create with its source material. Of all the licensed titles to make their way to North America, Genso Wanderer is the most polished and complete package (even if that package includes a lackluster sidescroller) to date. Whether you’re a fan of Touhou or a fan of a nice and challenging roguelike RPG, there’s plenty of adventure in Gensokyo to play both at home and on the go.

Touhou Genso Wanderer packages together one of the most approachable roguelikes and one of the more mediocre Castlevania type titles into one complete package for any tourist of Gensokyo.