This War of Mine The Little Ones – Review

This War of Mine: The Little Ones

War is a terrible, terrible thing. It is a word used to describe humanities' worst and most lasting follies. When we think of war, we use statistics and numbers to diminish the horror that is faced on the ground. We talk about the heroes that saved lives and thwarted enemies, and the events that shaped the battles. We rarely talk truthfully about war, about the story behind each and every number we see on the news, and in our history books.

The heroes might have their likeness idolized in statues that commemorate the ‘great sacrifices’ made, but not the faceless masses, the unlucky ones that happen to live where the conflict takes place. People throw around terms like ‘humanitarian crisis’ but few really know what that means.

This War of Mine The Little Ones is a rare glimpse into the lives affected by war. It is a brutal, dogged experience that offers some of the most impotent stress you will ever experience. You aren’t the hero of this conflict or even the villain. You are an anybody. An athlete, a chef, a journalist, a child.

Your goal, the end result in which you ‘win’ This War of Mine The Little Ones, isn’t by winning the war but rather surviving long enough to escape. This War of Mine takes place in the besieged and fictional capital city of Pogoren. Cut off and without supplies, you are forced to shelter in an abandoned and crumbling building. From here you must survive, until the conflict is quiet enough that you can escape the city. Fortify your shelter from the elements as well as other desperate survivors. Create makeshift rainwater collectors, tools and heaters to stay alive and plan your night ‘missions’.

Scavenging is the only way to eke out an existence in the war torn rumble of the city. You’ll be given a brief description of a handful of locations and what to expect. This includes what you might find there in terms of equipment.

There is everything you need to survive scattered amongst the smoking stacks of This War Of Mine. Supermarkets are good for food while long abandoned construction sites offer components for upgrading your shelter.

The gut wrenching part of This War of Mine though, is that these ruins won’t always be empty. Taking food from the starving hands of a stranger might just make you question the cost of survival, but you won’t be the only one. Your characters feel remorse, guilt and sadness for committing the apparent selfish act of living. While a content character will work harder and ignore pesky wounds or hunger for a time, a depressed or tired character will be sluggish and struggle to complete tasks. This is a vital part of the game, managing to the emotional as well as physical needs of your survivors. 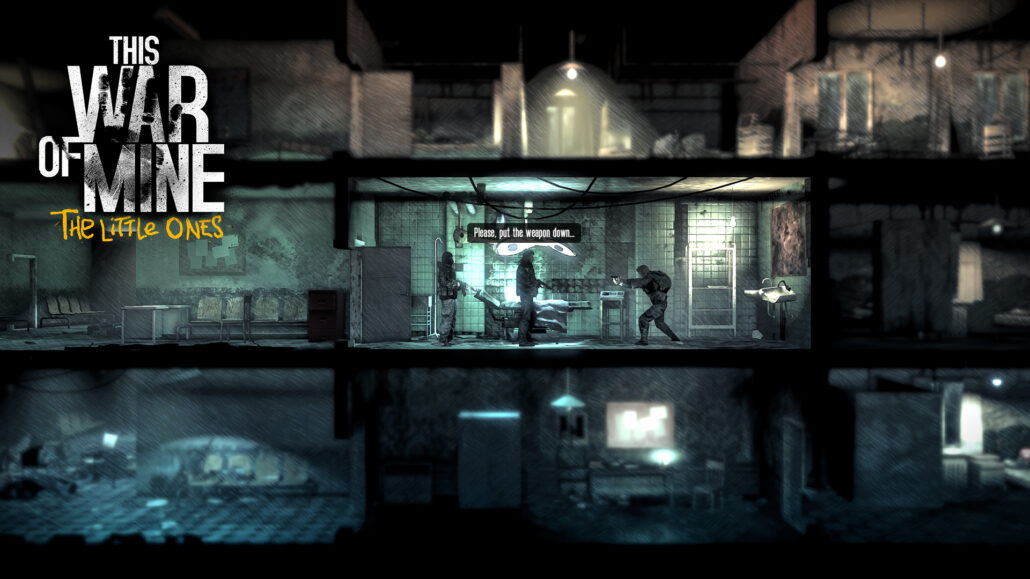 This is a lot truer of children, an additional element added to this console release of This War Of Mine. While less concerned about the goings on outside the base, children become deeply traumatized by events within the shelter. The death of a fellow survivor or a raid can deeply upset the kids. The adults will even go so far as notice the absence of innocent laughter and become sad themselves.

As always, the most harrowing aspects of war is death. The loss of a survivor is once again a great emotional blow to you and everyone else left behind. It is also, pragmatically, the loss of one of your greatest resources. When balancing your survivors between eating, sleeping and working, you need all hands in the rotation. It is a truly uncompromising view of war and people's existence in it. The only place where it falters is children.

Like so many games before it, children in This War Of Mine The Little Ones are immune to death. Instead of dying, these children will ‘run away’ in the dead of night if their hunger, or emotional distress becomes too high. Although their fate remains uncertain, it's hard to imagine a happy one for isolated children on the streets of a burning capital. It is entirely understandable why the developers, who are already taking just a hard look at civilians in war couldn’t bear to add the death of a virtual child as well, but it feels slightly hollow in the face of such unimpaired tragedy.

This War of Mine creates the tragedy in both death and life, and children play a hugely important part of the latter. Scavenging over stealing might feel better, but it doesn’t take long to grow attached to your group, and when the building and locations change randomly between playthroughs, there is an added incentive to make it through. When there are children to look after as well, children who can’t go out at night and can’t look after themselves, who barely understand what is going on around them, something instinctive kicks in. 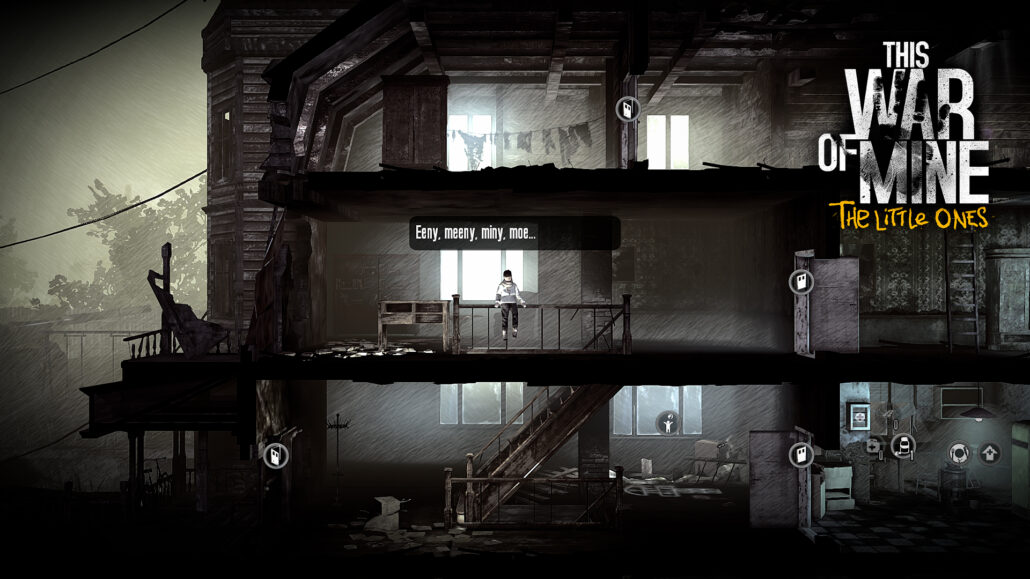 After about thirty minutes and one minor setback, I was ready to steal and kill to keep them safe. My adults were hungry and tried to keep them safe, and all of my energy was spent on making them as comfortable as possible. It is a terrible, nerve-wracking decision to choose who gets fed and who doesn’t.

I’ve never been so angry at a game than when I was raided. My shelter, barely holding on with just enough food and water to last a few days is attacked. While this all happens off screen as you’re too busy skulking through the shadows of a different ruin, you get a morning report of what was stolen. Seeing my food depleted and knowing that meant one person had to go without, or the medicine stores didn’t have enough bandages anymore to help a wounded survivor is terrible. I was so angry at the game, at the raiders, at myself for letting all these events come together and allow my vital resources to be stolen.

But it is meant to make you feel like this. You are meant to be furious, but in the end, you always realize there is nothing you can do. In fact, it's worse than that. What you feel is exactly what the people you’ve stolen from feel too. You have to reorganize your priorities and pray for good luck the next night to make up for it and hope the people you take from can do the same the same later.

The gray, claustrophobic graphics add to the mood of depression and hopelessness. Children scampering around the children add this terrible regret, as their innocence contrasts with the sound of distant artillery. A lot of This War of Mine The Little Ones involves just waiting: waiting for characters to rest up for the night, or eat or build. There are some long moments between the tension, moments that could be spent looking at Twitter or Facebook or grabbing something to eat. You’ll struggle to do any them, though. This War Of Mine shines a light in this world of misery and pain, something you can’t just ignore for a few minutes on Facebook. You’ll find yourself, sitting there, waiting aside your survivors. Waiting for the night, waiting for the food to cook, waiting for This War Of Mine to be over.

This War of Mine: The Little Ones adds more to the game that makes it both wholeheartedly enjoyable and deeply distressing. Its survival mechanics are impressively weighted, and the events throughout the war are harrowing. This feels like a game everyone should experience for themselves.