The Walking Dead A New Frontier: The Ties That Bind

I need to preface this review by stating that players new to The Walking Dead series won’t be lost if they jump into A New Frontier, however, they will be missing out on quite a bit of information. Also, there will be spoilers in this review for both Season 1 and 2 of The Walking Dead, so if you haven’t played either of these games you may want to turn away now. I’ve tried to write this review without spoiling anything as it is the season premiere. The reviews for the remaining episodes in this season will include information relating to the plot and the characters.

I’m sure many of you reading this will have replayed through both Season 1 and 2 of The Walking Dead in anticipation for the new game. After Season 2’s ending, I can’t say I was incredibly excited to dive back into the world of The Walking Dead. Yes, the ending itself was dramatic no matter what you picked, but the story itself didn’t engross me as much as Season 1’s story did. The first season got me to care about each of the characters in my group, and slowly but surely the writers killed them off one by one. By Season 2 both myself and Clementine stopped caring about the people around us, instead focusing purely on survival.

The Walking Dead A New Frontier puts you in control of Javier Garcia (referred to as Javi by his family). Javier’s story begins with him and his family witnessing the effects of the zombie apocalypse as the virus consumes his dying father. A few returning players may be upset when they are forced to play as someone that isn't Clementine, however, I believe this has resulted in a better game. Javier and his family introduce a more complex element to The Walking Dead story. Unlike Lee and Clementine who never had the chance to see their family (well, ‘alive’ versions of their family) during this time, we now get to experience the disaster from a different perspective.

In just one episode of The Walking Dead A New Frontier, you already start to care about the Garcia family. I felt more for each member of their family compared to practically anyone from Season 2, and I think a large part of that has to do with not playing the game from Clementine’s perspective. When you’ve played as Clementine, you never really feel like you can trust anyone, particularly people who you don’t consider your family. As Javier, though, family is all you have left. While Javier's family may bicker and argue amongst themselves, it's clear they will do absolutely anything for each other when asked.

It shouldn’t come as a surprise to anyone that Javier eventually bumps into Clementine during his story. Telltale Games have emphasized that decisions made throughout the course of Season 1 and 2 will impact Clementine. Personally, I don’t believe the decisions I picked made a big difference throughout those two games (barring the ending of Season 2). Season 3, on the other hand, is finally showing off ‘my’ Clementine, the same Clementine that makes hard decisions like killing and stealing from strangers to survive. I only got a chance to play through the premiere episodes once so I cannot verify how similar Clementine turns out depending on your decisions, but I must admit that I was very happy to see how my choices affected the character.

The Walking Dead A New Frontier introduces frequent flashbacks, detailing both Javier and Clementine’s last few years during the zombie apocalypse. While I expect Javier’s history to be largely the same for everyone (that said, you can influence his pre-apocalypse story slightly), it’ll be Clementine’s flashbacks that returning players will look forward to the most. Again, your decisions throughout the previous games are going to have an effect on how Clementine behaved during the gap between Season 2 and 3. I am hoping players get to see ‘their’ Clementine in action, otherwise the only thing that will be any different are these relatively short flashbacks.

Returning fans will be put into an awkward corner when it comes to decision-making in The Walking Dead A New Frontier. There are times where you will be forced to decide between Clementine and Javier's family, and I suspect there will be plenty more throughout the rest of the season. These choices are difficult because you feel emotionally attached to Clementine as your decisions have shaped her, but at the same time you can’t help but sympathize with Javier and his family. If I hadn’t played the last two Walking Dead games, I probably wouldn’t have sided with Clementine as often as I found myself doing. I’m almost certain returning fans are going to be conflicted, and I’d also love to see how someone brand new to the series approaches these tough situations.

Those of you with saves on a different platform to what you primarily use now need not worry about taking that information over. Telltale Games have created a ‘story generator’ tool, allowing you to select all of your decisions throughout both Season 1 and 2. This tool will select one of the 42 different starting points for Clementine’s ending and her relationships with other characters. Happen to be playing on the PS3/X360 and want your saves on the PS4/Xbox One? You can transfer saves this way by uploading your older saves on to the cloud via your Telltale account.

I played the premiere episodes of The Walking Dead A New Frontier at a review event on a gaming laptop. I was not made aware of the specifications of this machine, though I am fairly confident players will be able to run this game on any computer made in the last few years. This latest season of The Walking Dead appears to have a slightly more refined look, and by that, I mean the character models look shinier. As for the controls, not a lot has changed in this aspect. Everything is roughly the same as it was before, because if it ain’t broke…

Reviewed on PC during a review event. 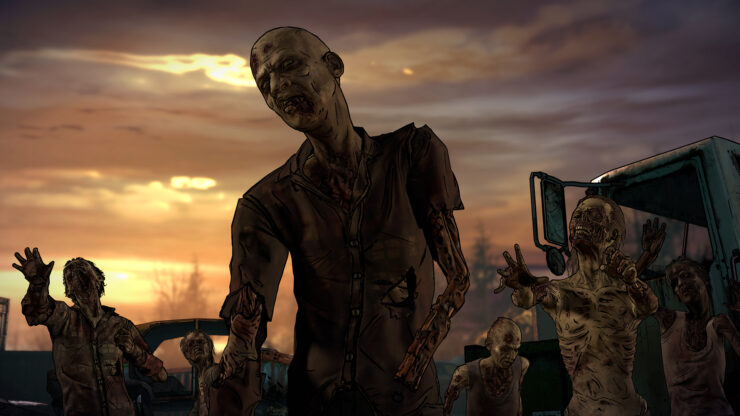 9
Wccftech Rating
The Walking Dead A New Frontier: The Ties That Bind

There hasn’t been a better time to start playing Telltale’s The Walking Dead series, and with the addition of group party play, you can also enjoy the story with some friends during the holidays. If you are wondering whether or not you should jump into the game despite not having played the last two games, I’d certainly recommend it. Unlike some of the episodes in previous seasons, there wasn’t a moment I found myself waiting for particular boring sections to end. The storytelling pacing in these premiere episodes has been perfect. If Telltale manage to maintain this level of quality, this could end up becoming the best season of The Walking Dead yet.