If Persona has been your only experience with Atlus’ RPG output, The Caligula Effect might feel remarkably familiar. With a scenario penned by one of the writers of the original Persona titles, Tadashi Satomi, Caligula’s story delves into the taboos of our society and the desire to do anything that’s prohibited. The result is a Vita-exclusive JRPG, that gives players more freedom than a traditional RPG would offer by breaking away from the genre norms. 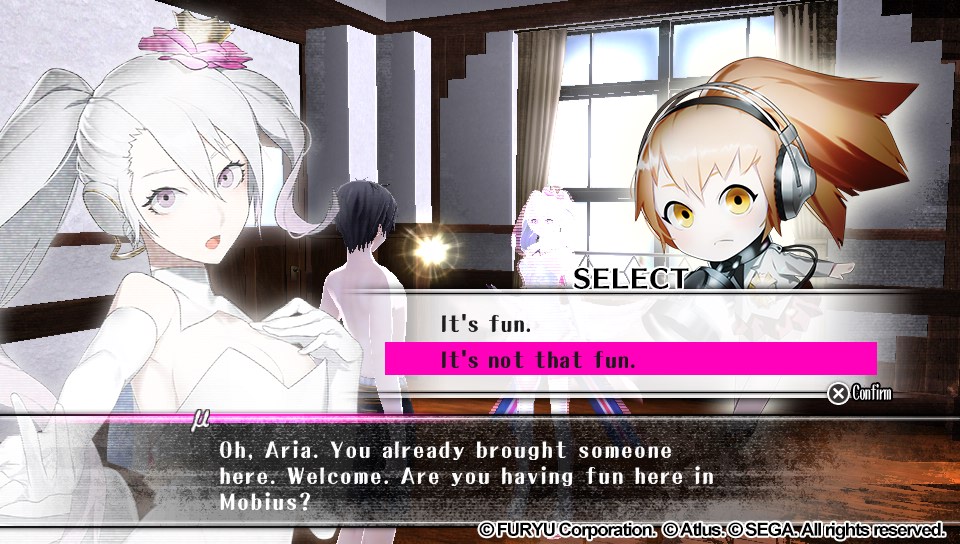 At the wishes of a virtual musical idol known as ‘μ’ (pronounced Mew), an entire five-hundred member class is taken into an alternate dimension of their reality known as Mobius where students can act out their desires (which typically focuses on praising and worshipping the virtual idol). Classmates who don’t have a strong willpower transform into the equivalent of Persona’s Shadows, taking on perverse forms of their weaknesses and internal demons. While Persona 5’s scenario only affected a few select individuals that were exceptionally vulnerable to these effects, The Caligula Effect takes that story and applies it to the entire student body.

Caligula’s unique turn-based combat is the title’s greatest strength. This is one of a growing list of RPG’s I’ve played in recent years that makes positioning one of the most important aspects. If you’ve had the pleasure of playing Cosmic Star Heroine or Trails of Cold Steel, the similarities should feel right at home when it comes to taking advantage of unit placement and skills that re-position the party into more favorable odds. What sets The Caligula Effect far above the rest is a brief insight into the future that shows the outcome of your attacking combinations, and the ability to adjust accordingly. 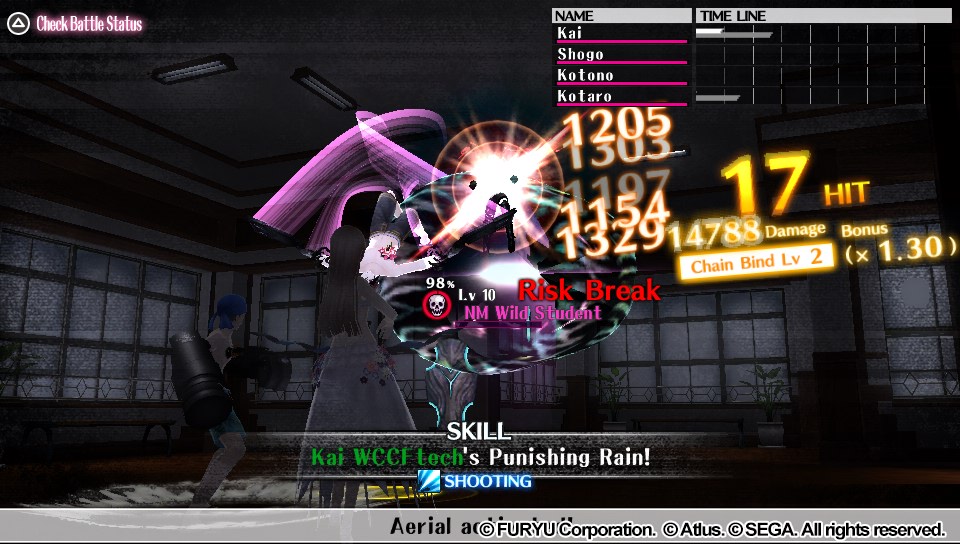 That flash of insight that your character receives is a brief five-second look into the future that shows the expected outcome. This isn’t always the intended effect, as hit rates can vary as well as critical hits that can quickly decimate an opponent’s defenses. Each action consumes a set amount of time, including time to wind-up and activate, and can be adjusted across the timeline in minute increments. For abilities that rely upon countering an opponent’s attack, I’d routinely have a character lay in wait and delay their move until the last possible second to unleash a successful counter. Chaining together a counter attack and launches a character into the air and using a secondary character’s ultimate move to blast airborne enemies can be incredibly satisfying, just as rushing in a character in to put up an emergency shield while the healer revives a fallen comrade.

Every party member in The Caligula Effect isn’t a jack-of-all-trades, but at the same time, aren’t limited to just one stock role of healing or defending. As players level up, they can invest skill points from a global pool to access new abilities, some of this can completely alter that character’s tactics. One character that I thought would simply be a melee bruiser wound up being essential to setting up counter attacks and sliding into more of a tank-ish role in the lengthier boss fights. To further boost a character's potential, The Caligula Effect's version of equipment are traumatic memories and core beliefs that can impart both passive stat boosts as well as new combat skills. 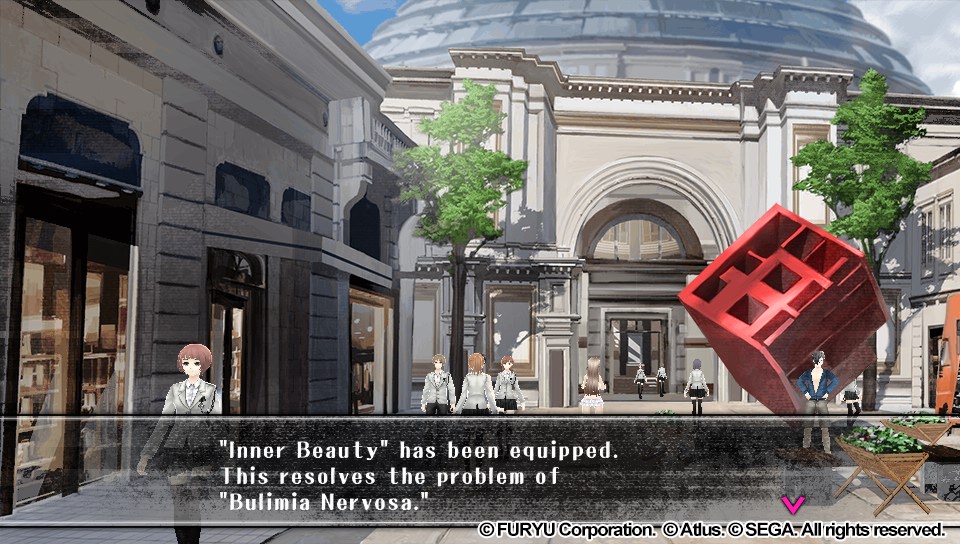 With exceptions to characters that have been equipped with stat-altering trauma, everyone typically starts combat with a pool of 300 SP and can chain together up to three actions per turn. While it may sound ideal to burn through all of your resources to eliminate a target on the first turn (and earn a double experience boost), longer fights must be played with much more restraint and conservation. Running out of SP can sideline a character and make them feel useless for a turn or two, as the standard 300 SP recharge not only takes a long time to charge up and activate but can easily be interrupted by enemy attacks if not timed properly. 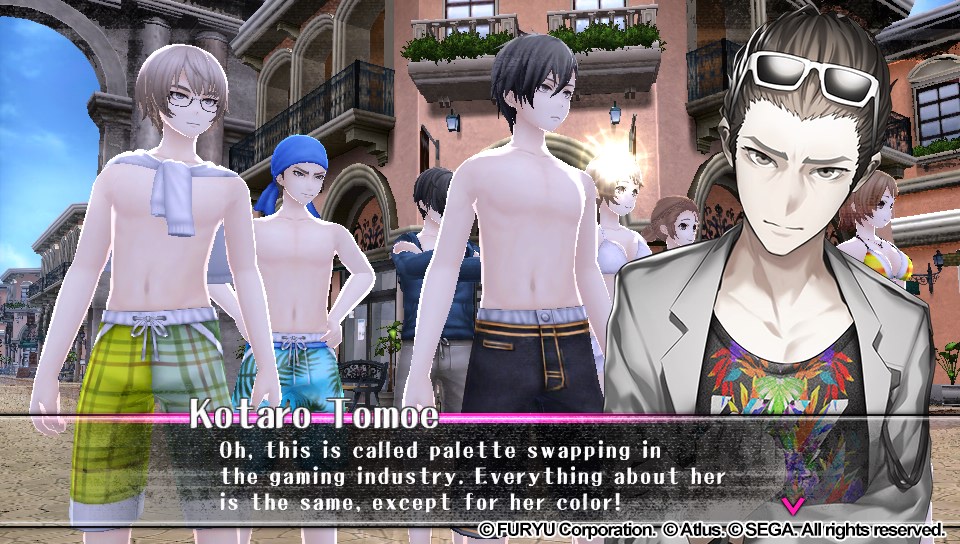 The class of Kishimai High is at the player’s disposal when it comes to party members, although the faceless generic classmates are exactly that. These extra characters can help pad your four-character party if you want a little bit of diversity across the varying weapon types/classes, although there’s not much incentive to use a character once you raise their Affinity to the max and unlock their deep traumas to incur additional passive bonuses for your party. It’s a novel concept on paper but later becomes a chore just to rush through their desires once you hit the fifty or sixty-student mark.

Unfortunately, once you look past the impressive combat and quantity of traumatic classmates, the rest of The Caligula Effect fails to match that caliber. The story to Caligula holds so much promise of exploring taboo (transphobia, fat-shaming and bullying, just to name a few) but doesn’t deliver on those strengths. Too often, the story falls back upon Japanese tropes that feel overused and ultimately lead to a mediocre story. At the same time, The Caligula Effect offers some enjoyable musical tracks which fade seamlessly into vocal variations when it comes time to battle, but the lack of diversity in these tracks immediately grow old when you’ve heard the same song for a couple hours straight in a dungeon. 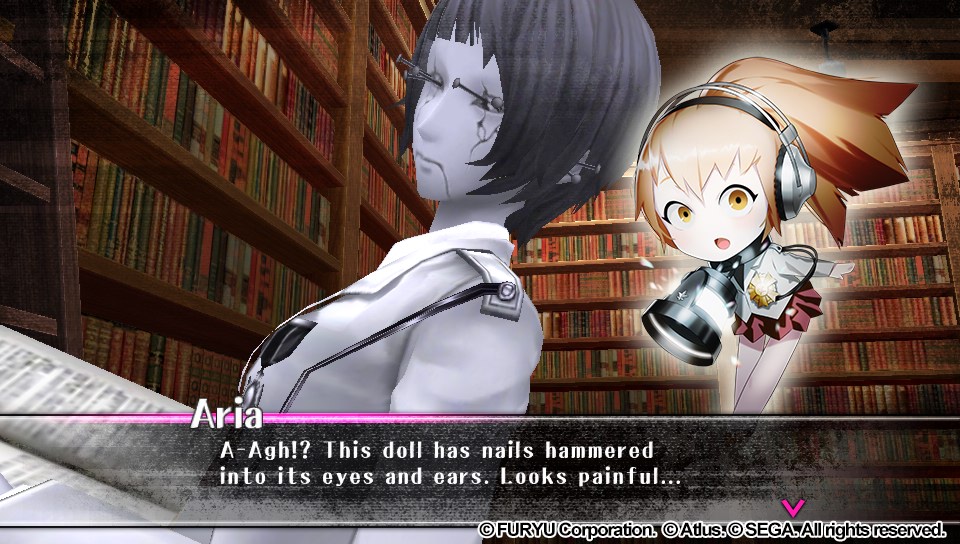 The Caligula Effect is a bit of a difficult RPG to quantify and narrow down my feelings on. Caligula’s combat stands out as the best reason to pick up and play this Vita-exclusive RPG, second to the story that should appeal to fans that just wrapped up Persona 5 and want something more in that vein. FuRyu might not have a fully-polished RPG on their hands to deliver, but it’s a worthy title that stands out from the rest on the Vita.

FuRyu's latest RPG might be their best work yet, with a combat system that can be incredibly satisfying to link together, but there is still something lacking in the parts that don't attempt to emulate Persona.