I've made it to Mars three times. These were long, arduous trips. I faced death, destruction and my own rapidly increasing stress levels. These were the good times, the times I made it. I failed a lot more than I succeeded.

Tharsis is a Turn-Based Strategy game, set just ten weeks before the first manned mission to Mars has reached its target: that's when all hell breaks loose. A micro-meteor storm hits, you take damage and two crew members are killed. Four people are left. The damage needs to be fixed, supplies are running low and the stress of the crew rises to unimaginable levels. 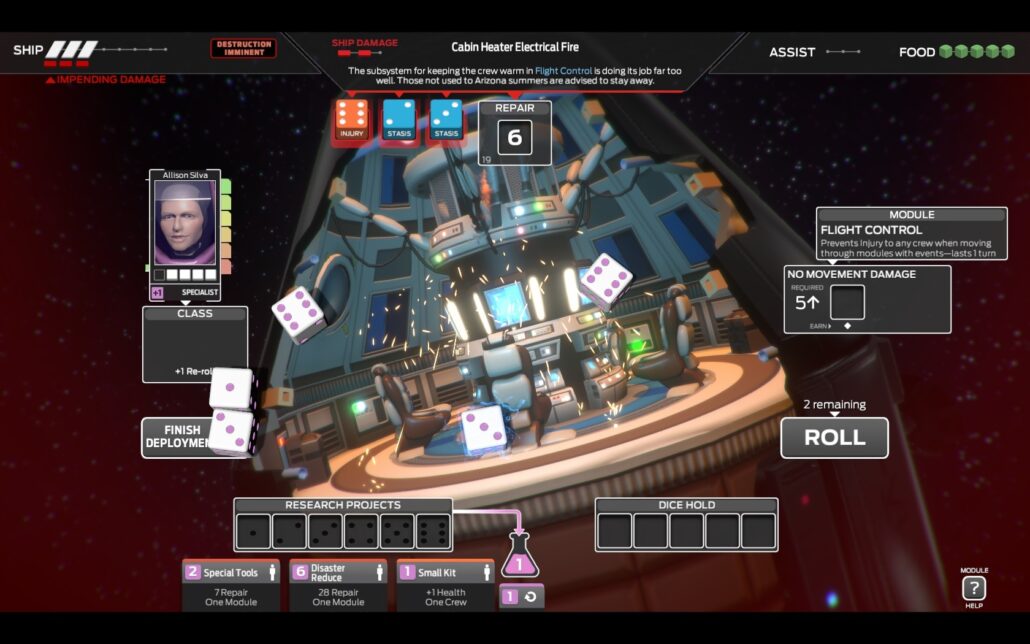 Each turn sets you a new task, a new module of the ship will be damaged. If this damage remains at the end of the turn a negative effect, ranging from direct damage to the ships hull, to lowering the life of each crew member or lowering the number of available dice, will kick in. You will have to use the members of your crew to prevent the damage from becoming too severe that it destroys the shuttle. At the same time food and resources, both represented by the dice you roll, are scarce.

This all focuses around the core premise of the game: which problem do you solve first? If your ship's hull drops to zero, you explode. If your crew loses all their health, they die. Events persist from turn to turn, which makes it difficult enough to select which problem to fix, but there are other considerations to take into effect. A functional module can have other uses. Operations, for example, can be used to reduce stress. The Greenhouse is essential in harvesting food, which is where the other key tactical aspect of Tharsis, resource management, comes into play.

At the start of each turn you are able to give a member of the crew some food, this in turn allocates them three extra dice. However, it's very easy to run low on regular food if you don't spend enough time in the greenhouse which leaves you the option of sitting with just a single die to roll, or you can resort to cannibalism, relinquishing your humanity to get two extra dice to roll. 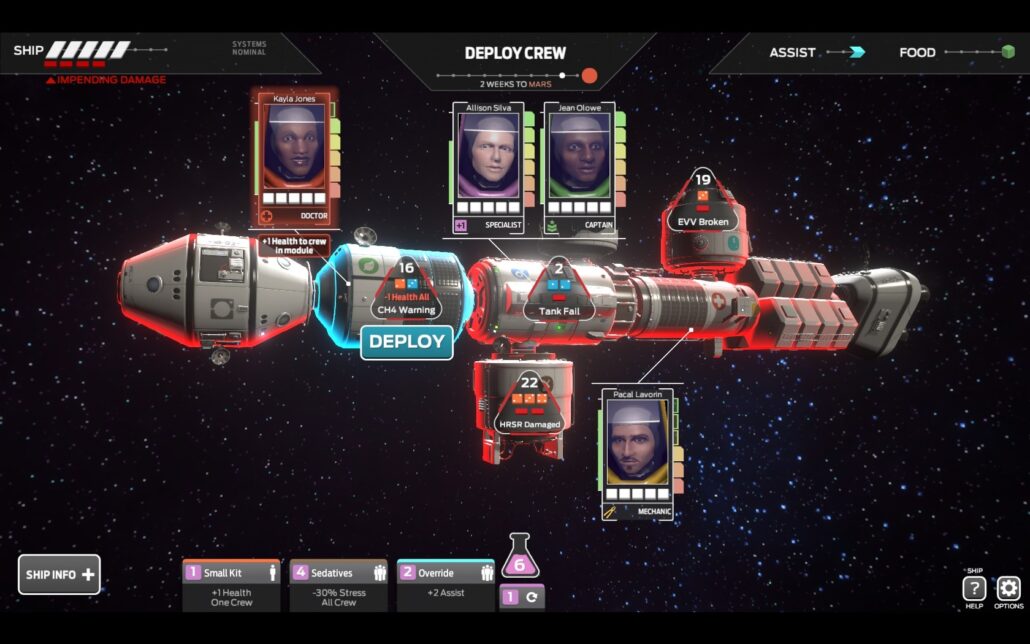 Rolling these dice is a surprisingly compelling thing. Where most games of this type would simply animate a few dice that land on the number, preselected by a random number generator, Choice Provisions decided to do something unique in actually creating the dice, rolling them into an invisible box and leaving physics to be the harsh mistress that decides your fate. It's a gambler's dream as every roll is a gamble, especially so when the negative effects are thrown in.

With a total of five dice to roll and a few times to roll them, you would think it's simple odds that you'll get the numbers you need to fix an area. The developers thought of this and each of the problems that can affect a module also has the chance of an additional effect should you roll a particular number with your dice. For example, a void effect will destroy any dice that show the number that is indicated by the effect. Stasis, always on a lower number, will freeze the number in place. Possibly the most devastating is injury, which will damage the crew member that rolls the particular number.

Further choices are brought in at the beginning of each turn, giving you a number of options to select from. These are directly linked to the stress levels of your crew, the higher your stress levels, the worse the options generally are. These start-of-turn selections can be absolutely brutal at times, often leaving you with no real option as each of them have both a positive and negative, linking in to the overall feeling that there is no good choice, just the least worst one. 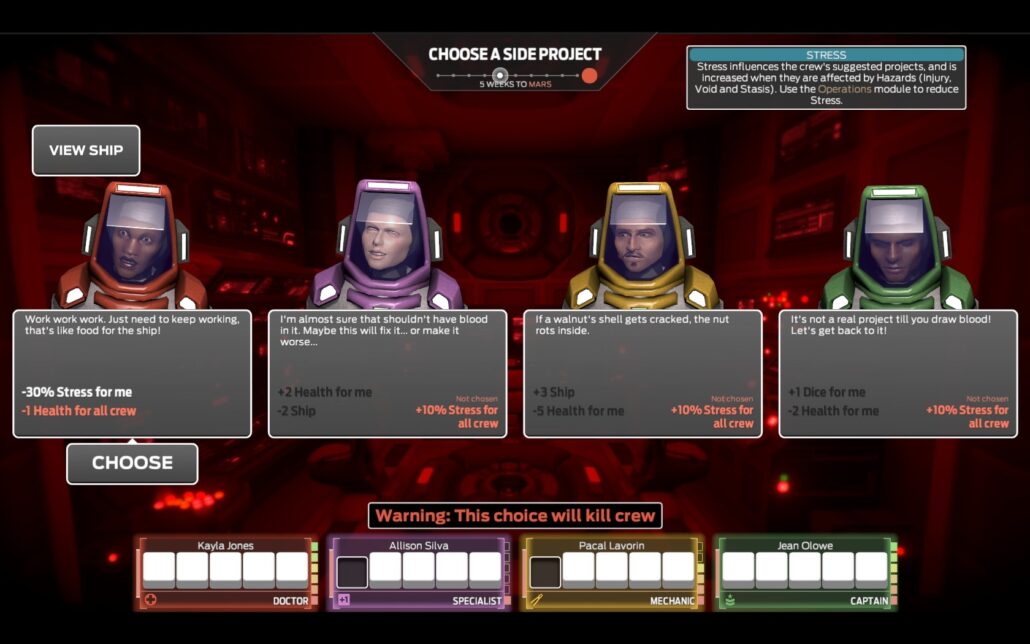 Tharsis does sadly have its issues and the main one is quite possibly one too big to ever overcome, the utter feeling of pointlessness it has when the game is that way out. At any turn you can be on top of the world: the ship is well repaired, your crew members are well fed, have barely any stress and are ready for anything. Anything then happens, and it happens hard. The next  turn will then throw insurmountable odds at you, specifically so when combined with bad rolls or, worse, rolls that injure your crew.

On the other hand, I can't stress enough just how great it is to look at and even to play, within reason. The board game visuals, combined with the drag-and-drop controlling of your crew (much like board game pieces) makes for a very appealing aesthetic that is rarely done right in video games. This combines with the dice throwing and the physics placed on the dice, rather than a random number generator, to make for a game that I could genuinely see being a good board game.

What extends this is the fact that the story, shown in brief cutscenes at the end of each turn, are very colorful, looking like pages from a graphic novel that could accompany a board game. At the same time, they are so incredibly easy to ignore as the story is pointless to say the least, though it does explain your repeated playthroughs - should you reach Mars to see why. 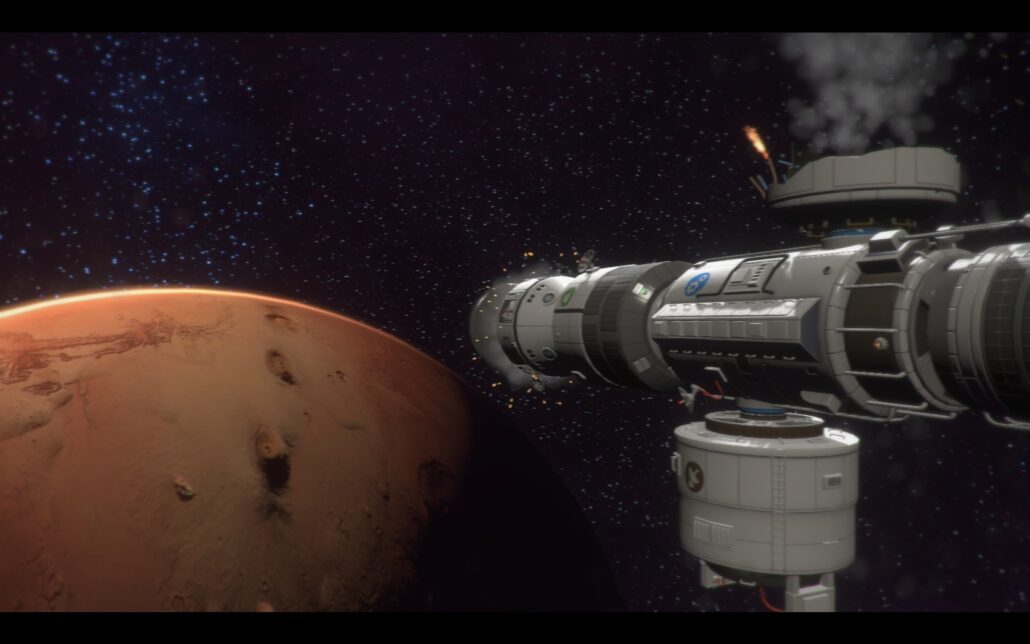 Marmite springs to mind when I think about Tharsis. There is certainly a love or hate vibe going on and usually it's both at the same time. The sheer focus on survival, often against seemingly impossible odds, can be a thrill, particularly so when you actually beat the odds, but the relentlessness of it becomes exhausting. What makes it worse is that the relentlessness even becomes boring after a prolonged period of time. It doesn't help that there is only one game-mode to play, with missions and other planned features not yet implemented but teased on the main menu.

How you feel about Tharsis will depend on the sort of person you are. If you're a fan of constant raising stakes with no reprieve, think an extreme difficulty FTL: Faster Than Light, then this is certainly the sort of thing that will appeal to you. Even if not, it will still appeal, but in smaller doses. Either way, Tharsis is a compelling, but polarizing, game.

If you're a fan of constant raising stakes with no reprieve, then this is certainly the sort of thing that will appeal to you. Even if not, it will still appeal, but in smaller doses. Either way, Tharsis is a compelling, but polarizing, game.