Syndrome Review – A Symptom of Something Greater

A desolate ship trapped with no help coming; signs of a robotic AI uprising;  noises that make the hairs on the back of your neck stand up. All of these create the framework for an outer-space horror that should invoke the likes of Event Horizon

After waking up from cryosleep aboard pioneer ship The SPS Valkenburg, it’s the player’s role to stay alive aboard a ship filled with horrors while investigating the source of the crew’s descent into madness. Played from a first-person perspective, exploring the Valkenburg can be a tricky affair with just about anything in the environment looking to bring about a sudden end. It’s been a fairly common trope in science fiction that draws some similarities to Event Horizon and Dead Space. Syndrome hits a number of beats in the story that should feel quite familiar to fans of survival horror set in outer space.

Working through the narrative of Syndrome are a number of quests that string the player along the space ship. Exploring previous areas is a constant theme and it's very rare that you'll see a section of the ship just once in your six-hour journey. To propel the story forward, players are led along from one objective to the next with little cohesion keeping it together. On one deck of the ship might be a control panel needed to take control of some of the Valkenburg's defense systems, To access that panel, players have to visit a different floor to get a keycard to open that door, but first they'll have to retrace their steps back to the previous floor to find a memo with a door combination on it. I rarely felt any impact to the objectives and felt merely like checking off boxes of what sorts of moments need to be in a science fiction story. 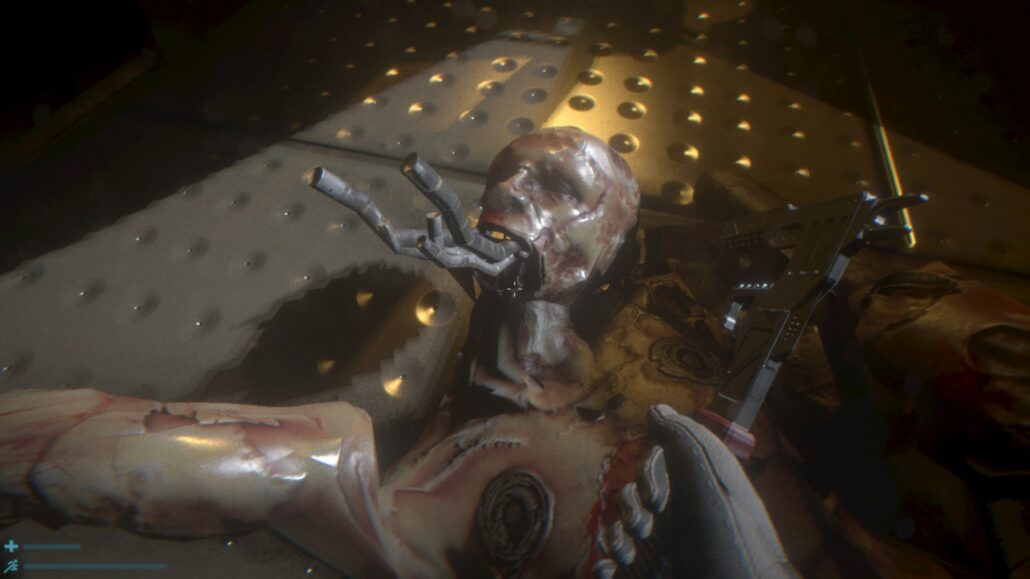 Unfortunately, Syndrome fails to capitalize on the groundwork that turned games like Dead Space into horrific masterpieces. The number of encounters with enemy combatants in Syndrome (a particularly horrific beast with blades for arms that rears his ugly head halfway through comes to mind) is intended to be moments of suspense and dread worrying about if the AI knows where you are and will hunt you down.

This scenario worked surprisingly well for Alien Isolation, but not so much with the clunky AI of Syndrome. The most common enemies in Syndrome are mutated cyborgs with wiring spewing from their gaping maw whom ‘relentlessly’ chase the player that’s supposed to fear being struck down. These moments are intended to invoke a fight-or-flight response from the player, although neither solution works particularly well. If attempting to run away, Syndrome tries to suggest players take shelter inside lockers that are randomly scattered across the ship, which only really works if the enemy isn’t anywhere nearby. Trying to take shelter anywhere else, even crouched behind stacks of storage crates and furniture doesn’t help as the AI is a bit too perfect in its omnipotent sight.

Fighting is another sordid affair, with clunky melee combat with a block that doesn’t offer much defensive capability and gunplay where ammo is more scarce than health kits and there’s no impact to the munitions that hit their intended target. The pistol players can acquire consumes roughly half a clip of bullets to strike down even the most basic threat; routinely I’d find a wrench to be a more effective tool, especially with how limited ammo is aboard the SPS Valkenburg. 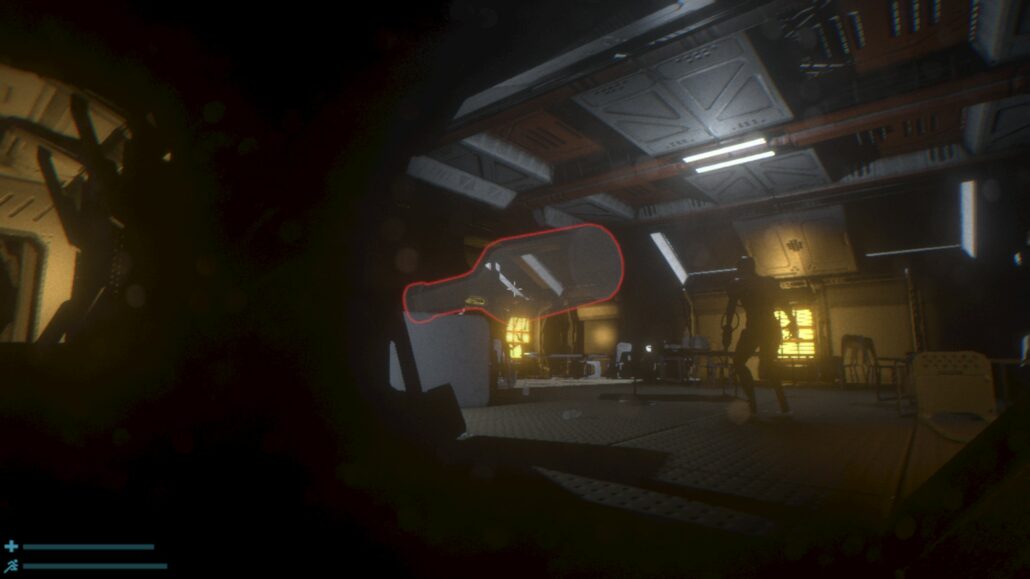 Syndrome intends for the player to treat the experience as a survival horror by intentionally depriving the player of any tools of self-protection. Instead, the game asks players to take a more stealthy approach and try to sneak around encounters. When facing a monster that is blind and reacts solely to sound, the natural course of action would be to sneak around it or use the environment as a distraction. Typically in these situations, there’s at least a glass bottle to throw and generate a little noise. Unless the enemy AI was in just the right location, most of those shattered bottles would go unnoticed. But take a single step while forgetting to crouch and the creatures would attack and bring the player to an abrupt game over.

Syndrome has a number of gameplay ‘quirks’ and bugs that were quite easily repeatable and frequently ruined any progress since the last manual save point. Try crouching and trying to walk out of a locker, then see how many times you either get trapped back into the locker or clip through the ceiling and can’t move. Or try picking up a glass bottle and bump it against the wall. Chances are, it’ll shatter and lock up your controls preventing any further progress. It wasn’t just in one particular spot or instance either. The playable build popped up all sorts of bugs that I’d like to see patched in time, but that won’t mean much if the player grows tired of exploring the SPS Valkenburg.

PC aficionados that are looking to max out their gaming rig won’t have much customization to work within the current build of Syndrome. The usual graphical settings pop up in the settings: chromatic aberration, shadow quality, et cetera. It’s too bad that these settings won’t stick around for long. After dying (which will happen multiple times as you try to grasp the poor AI routine), these settings reset everything back to defaults save for resolution. On a modest laptop, I’d hover around 40FPS with everything on and just toggling off shadows would bump up to a steady 60FPS with the occasional dip in certain scenarios (burning flames in particular). After dying in one specific location over and over, it became a ritual to hop into the settings and toggle all of the settings off just for the performance boost and remove distractions from the scenery.

Ultimately, Syndrome is self-aware of what makes a great horror game set in outer space, but fails to execute.

Syndrome has a foundation in place to be a creepy horror story that focuses on the desolation of outer space and the madness it can bring, but the execution is a few light years behind. It might give players something more to try out for a Halloween-themed gaming binge, but players might also die of boredom long before they succumb to shock.