One thing that I really like about playing video games in 2016 is that there are so many high caliber games to choose from. Sadly, titles like Super Dungeon Bros remind me that not all games are high caliber. In fact, some games aren’t even mediocre. This game takes aspects of previous dungeon brawlers and demonstrates what they would be like if they had repetitive level design, bare bones characters and frequent technical difficulties.

Super Dungeon Bros is a rock-themed dungeon brawler for up to four players. Set in the realm of Rockheim, the game features three worlds: Cryptheim (an underground dungeon), Chillheim (an icy brewery) and Bogheim (a jungle teeming with poisonous plants and animals) each split into a number of depths. Players embark on a quest with four heavy metal characters: Ozzie, Freddie, Lars and Axl (or their ‘broette’ variants). The characters are distinguishable by their colours but surprisingly, this is the extent of their differences. The opening scene of the game gives players the impression that each character has a strong personality, with Ozzie being labelled as “the resident joker in the pack” and Freddie not understanding the concept of fear. However, when actually playing the game, the characters lose all sense of individuality, barring their irritating voice lines - which are intended to be humorous but don’t quite cut it. It’s a shame that next to no personality shines through with these heroes. With the developer choosing such a strong theme for their game, there are a number of ways that the bros could have been more interesting characters to play as. It seems very lazy that there are barely any differences between them in fact, the only thing that effectively sets them apart in the dungeon is their weapons.

Players begin their dungeon brawl with two weapons to choose from, the ‘Aegis of Incursion’ sword and ‘Pain Hailer’ crossbow. The sword is an adequate weapon to start with, utilising a light quick attack which can combo against multiple enemies, a heavy spinning attack and an ultimate move (which all weapons have). On the other hand, the crossbow was nowhere near as useful. With it’s lengthy reload times it didn’t really help the rest of the team in the multiplayer mode and could not pick enemies off quickly enough in the single player mode. Thankfully, additional weapons can be purchased using shards that can be found near the end of some of the levels, although you’ll have to grind for a while to be able to afford them.

Furthermore, Super Dungeon Bros also uses gold to upgrade the heroes at the end of each level (or depth, as it’s referred to in-game). For example, these upgrades include reducing the amount of damage that a hero takes or increasing the base attack of their weapon. Gold can also be used in a shop located in some of the levels, offering extra lives, health restoration and additional charges to use the characters’ ultimate move. Budgeting is therefore incredibly important as players will have to balance their gold between all of this. Lives and health are not reset at the beginning of each level, arguably making the later depths unnecessarily difficult. This is particularly frustrating in the multiplayer mode as teams share lives, meaning that if a teammate dies and is not revived, a life will be removed from the entire team. Buying lives will also cost an individual 500 gold but as the life itself is shared by the team, some players may have to sacrifice one of their upgrades for the team. This is arguably even harder on single players as they cannot be revived. It’s also worth bearing in mind that none of these upgrades are permanent and will reset when a player is out of lives and dies or when Super Dungeon Bros inevitably crashes. Which it will, many times.

Super Dungeon Bros’ overall performance was pretty much unacceptable. For a game that boasts couch or online co-op for up to four people, it sure struggles with more than one hero on screen! Every time the threat meter neared it’s maximum and more enemies appeared, the frame rate dropped so low that it was practically unplayable. The game also crashed far too often, most notably during the boss fights. Not only was this infuriating, it also marked the end of my progress in that world as the game does not allow players to manually save their progress as they go.

Moreover, Super Dungeon Bros promises “endless dungeon combinations” due to its random room generation and roguelike aspects, but this is another area where it fell short yet again. The three worlds are barely reskinned versions of each other with a few additional enemies thrown in to fit the environment. After a short period of time, its easy to notice the similarities in the so called “random” room generation, too. On some of the levels, two consecutive paths leading to a golden chest were exactly the same, offering little variety for players. As a result, this made the game feel repetitive very quickly and made it boring to play. The puzzles were equally lacklustre, usually relying on the player to just switch a few levers in single player. In co-op mode, this changed to one of the heroes simply having to throw one of their teammates over a large gap to open a chest. At the beginning of a world, players can also decide whether they want to increase or decrease the difficulty. This may seem like a nice idea on the surface, but in reality it just proved that the 'normal' level of difficulty in the dungeons was a tad too difficult. Then again, decreasing the difficulty made the game too easy so it was quite hard to find a good balance.

When I started Super Dungeon Bros, I was particularly interested in the soundtrack. As a fan of rock and metal music, the game’s theme greatly appealed to me and I was ready to enjoy some spectacular shredding. To my disappointment, the soundtrack was not up to scratch and just became annoying after a while. The fact that React Games are also charging for the Dubstep and 80s soundtrack seems like an absolute rip off as the tracks are equally as dull as the main soundtrack. Including these genres also completely ignores their overall theme which then leads me to question whether they actually considered any of these details to be truly important in the first place. Despite the fact that only cosmetic items and additional soundtracks are available for purchase in the store, the game feels very similar to a free-to-play game, except its missing the pay-to-win element. Here players will have to grind to get the best weapons, or just deal with the default ones.

Reviewed on PlayStation 4. Review code provided by the publisher. 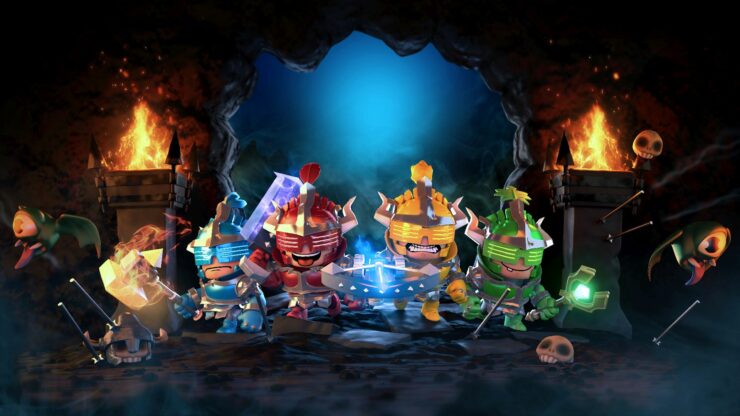 React Games may have had good intentions with Super Dungeon Bros, but it's miles off competing with the likes of Gauntlet or even older games like Castle Crashers. The game lacks originality, starving players of any truly enjoyable gameplay and its half-hearted attempt at embracing a rock theme doesn’t amount to anything particularly unique or cool. Despite trying to keep things fresh by running daily and weekly challenges, it still doesn’t offer anything that really draws players back in the long run. It’s disappointing to see a game that had so much potential to add something new to the genre, fall short in so many ways. However, the most disappointing aspect of the game is its performance. With frequent crashes and poor frame rate when large numbers of enemies appear on-screen, Super Dungeon Bros is a title that I would advise people to avoid.