Strike Vector EX Review – Great in Multiplayer, Not as Much in Single Player

I didn’t realize that flying robot battle arena is a genre until quite recently. I’m sure we’ve all seen the old school classics like Zone of the Enders, and its charmingly retro-incredible vibe, but as it turns out, there’s been quite a few attempts are recapturing that fast paced robo-destruction.

Unfortunately the new attempts to create that arcade feel wallow in the shallow waters of spectacle without engaging in anything more interesting, and that includes Strike Vector EX; at least in single player. Although pretty and distracting, Strike Vector’s campaign is shallow, and quickly repetitive.

Framed in a mechanized future where man slaves away for corporations, there is almost something Deus Ex about the environment. There is clearly more going on than our initial explanation, but the payoff, the conspiracy and intrigue are all half-baked and underdeveloped. By the second level, your character has always pledged allegiance to freedom and joined a gang of pirates, after killing several of them.

Clearly the focus of the game was the combat. As a pilot you careen through the skies in a ship that maneuvers like a fighter jet or a levitating robot at the touch of a button, it looks powerful and fast and dynamic. After a short and fairly stifling tutorial you’re opened up to experiment with the two flight modes and that’s when you’ll quickly realize how shallow the exciting game play appears.

Battles are waged against similar craft, and boil down to two distinct, but rapidly uninteresting stages. First is the pursuit, while you race to meet your enemies in the air, firing a few quick shots if you manage to align your crosshairs during the chase. After that, you simply unfold the robotic weaponry of your ship, unload a suitably destructive payload before finding the next target.

Visually the whole game looks like an intense firefight, with dogfighting followed by all-out assault across the skies. But in terms of pure gameplay, each fight is obstinately the same, with the occasional need to avoid a flanking maneuver. Strike Vector EX even includes boss battles, with particular characters and ships proving to be the main adversary of certain levels.

These boss fights, are for the most part, identical to all the other combat situations within the game. Mostly the use the same ships, and likewise play exactly the same, with a bit more health. Unfortunately that is pretty much as varied as Strike Vector gets. The maps are the most interesting part of the single player. From colossal factory platforms to space and massive futuristic cities, you’ll be doing battle in some impressive locations, and if you do so in multiplayer, you’ll have a lot more fun too.

As you may have guessed, my first experience of the game was single player, and it somewhat soured the game for me. When I booted up the multiplayer side of the game, I expected to be equally disappointed. Although this genre wasn’t one I was overly familiar with, I had expected more skill in the game. The first round I played in multiplayer did not change that notion, as I played with bots since no other players could be found.

But there was something different in this session, a more fast paced nature not seen in the single player game. Without the clunky dialogue and the need to wait for the next wave to spawn, the game, even a quick encounter with bots was a lot more fun. 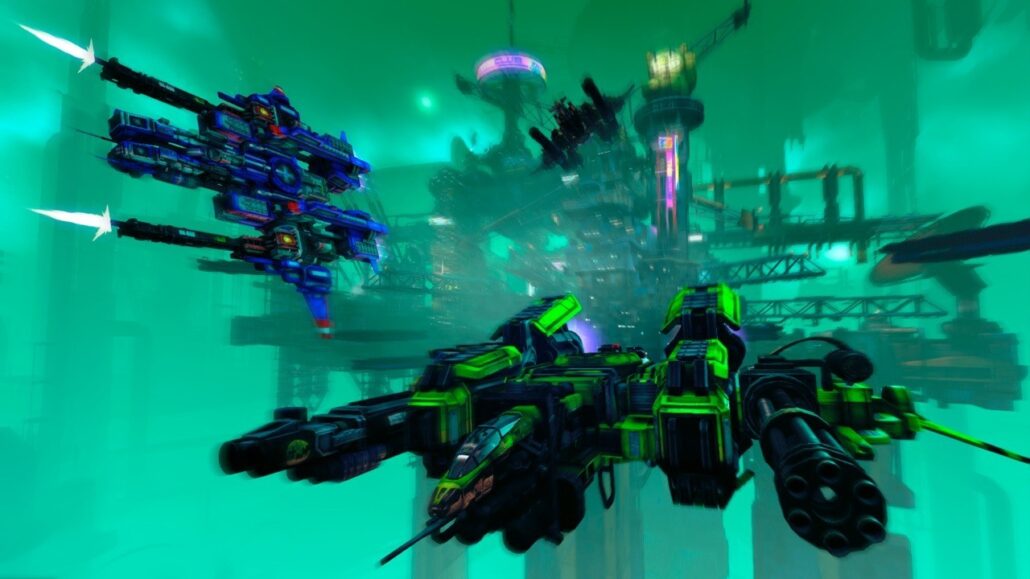 The second game I had included other players, and this is where Strike Vector EX clearly belongs. The sudden introduction of intelligent enemies very quickly demonstrated the nuance in the game tactics. Suddenly enemies facing a losing battle would attempt to escape, while squads of enemies would attack en masse. Some pilots would swoop in for a quick skirmish before immediately disengaging. Others would act as a tank and attempt to pulverize your defenses.

While the AI breaks down in a simple set of combat routines, human competition, is fast, furious and manic. You can customize your layout, swapping out weapons and abilities to surprise your enemies. A lot more focus has gone into the multiplayer then the single player, and it is where you should spend your time in the game.

If you are looking for a narrative to sink your teeth into or something you can play by yourself, Strike Vector EX isn’t the game for you. But the short burst of explosive entertainment that comes with each multiplayer match is well worth the price tag.

This is a multiplayer game, not a single player one. Cruising through the skies against a squadron of human pilots is frantic and enjoyable. Anything else is not worth your time.