Being a space marine is hard. It seems like you can’t get into that career path without having a guaranteed encounter with aliens or demons, or some kind of demon alien hybrid… Incidentally, that’s what you’ll be coming up against in Solstice Chronicles: MIA, a new PC twinstick shooter that’s dark and likes guns.

In Solstice, you play as Grunt. Or Marine. Same person. Actually, your gruffly-voiced character is never really given a proper name, instead your loadout is more important as you take control of one of the new Solstice combat suits. Your Drone companion is there for banter to break up the shooting, and she actually gets a name - Saffron. Grunt and Saffron have to travel deep into a space facility filled only with the dead and the alien/demon things that killed them - luckily, they’re well armed… 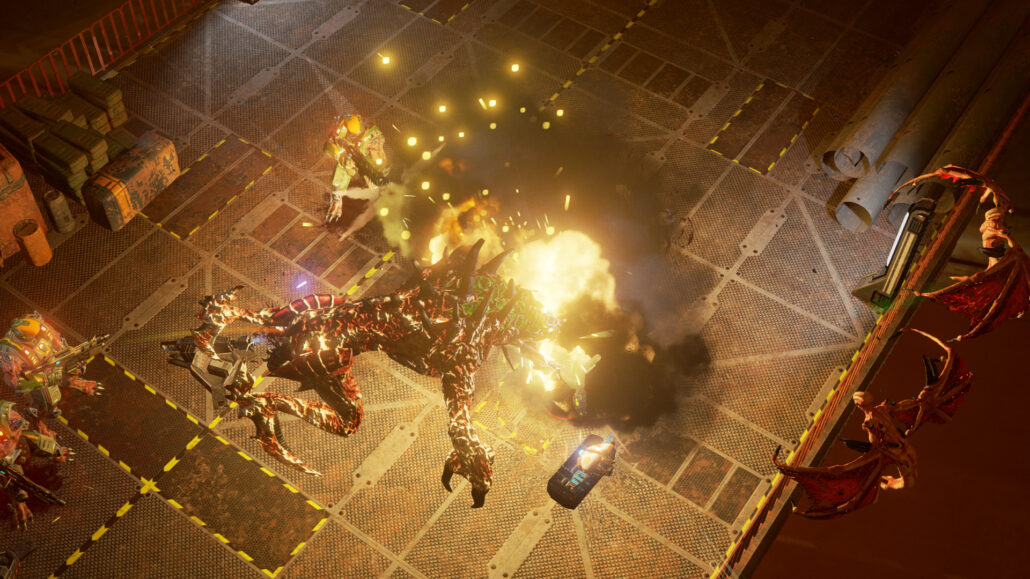 Solstice takes its name from the combat suits you use in the game - namely the Solstice VI, the prototype suit not yet publicly known about. Grunt and Saffron quickly locate it, and Saffron, under the orders of the Elysium Corporation, ushers Grunt through a number of combat halls.

Your Drone helps out in battle too, putting down a wide-reaching bomb, a shield to hold back the horde, or even scout the area and bring you health and ammo. When the alien horde becomes too thick, relying on Saffron is necessary - you’ll need to stay stocked on ammo, the shield becomes necessary on many occasions, and the bomb can be a lifesaver in certain situations. 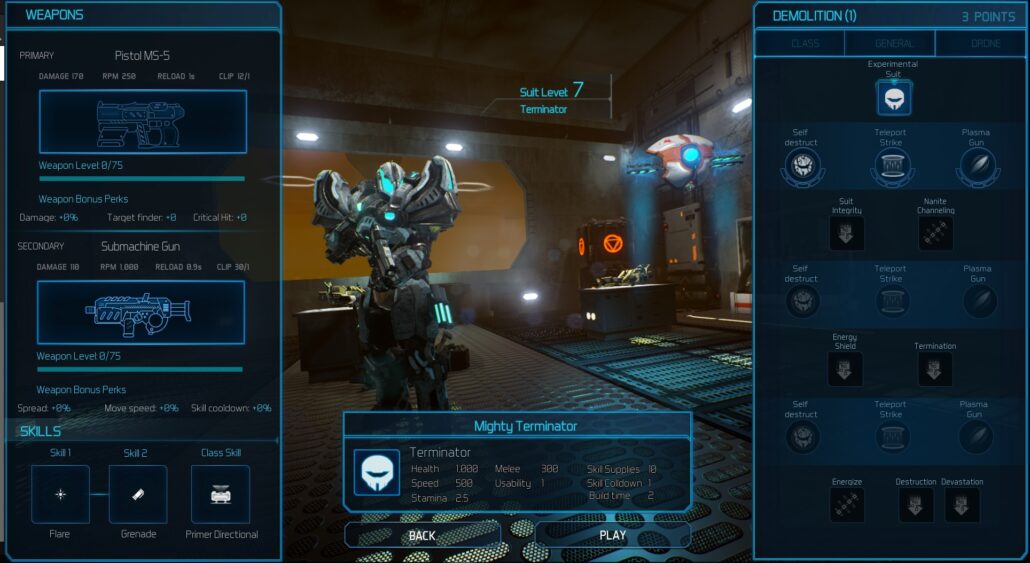 Gameplay feels fine when playing with a gamepad - this is a twin-stick shooter after all - but is also serviceable when using a mouse and keyboard, if not recommended. Which makes it a shame that during our period with the game, playing co-op - possibly the highlight of the game - was not possible with two gamepads, instead requiring one gamepad player, and one keyboard and mouse player, though this is due to be addressed.

Solstice is an incredibly dark game, and I don’t mean that because of the story or the body count, but that everything is just incredibly dark, all of the time. As it’s a top-down game you’ll be looking at the ground most of the time, and a majority of the rooms in this space facility have had their lights broken, or the power has gone off.

The power always goes off on space stations, doesn’t it? It doesn’t matter which game it is, whether is DOOM or Alien Isolation, you’re guaranteed to have the lights go out and have to flip some switches and find some keys. Solstice is no different in this regard, and these menial tasks will give you goals to work towards while racking up a massive alien body count. 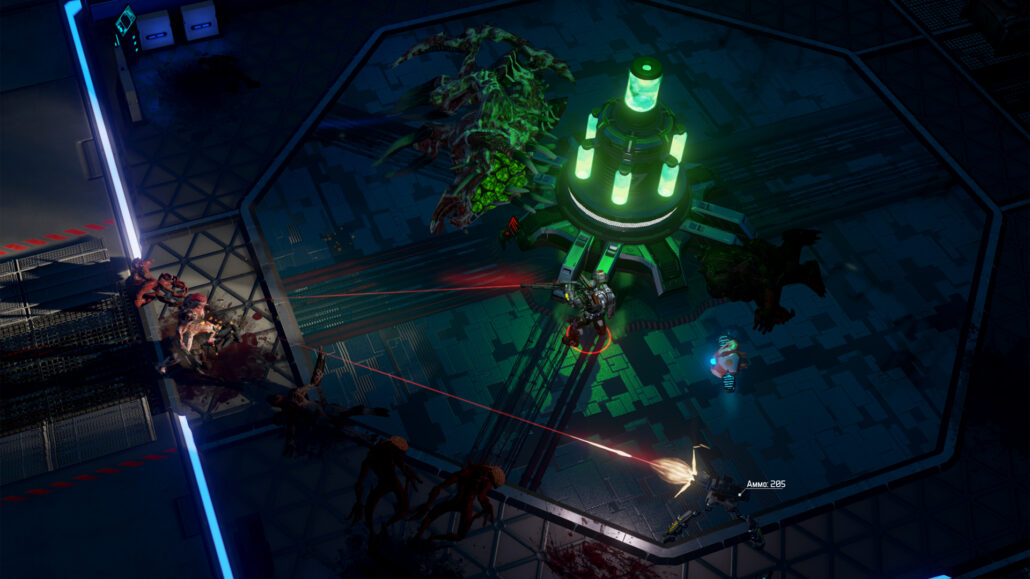 The DOOM comparisons don’t really stop there either - the disgusting pulsating demon/alien things you encounter in Solstice Chronicles look somewhat inspired by the latest DOOM’s aesthetic. Disgusting green pustules throb and explode with thick green gas to choke your player and more are spawned from a hell gate/alien nest/demon spawning thing. It’s hard not to be reminded of DOOM when the creatures, the setting, the space marine, all feel a bit familiar. That said, pairing this aesthetic with the top-down twin-stick style makes Solstice more than just a DOOM-wannabe.

But it could’ve done with one more thing from DOOM - that being the movement. Solstice Chronicles is slow. Too slow. Your character moves slow - he has a sprint, but stamina is seriously limited - in fact, if you use Saffron’s bomb you may even find it difficult to escape the ever-widening blast range. This becomes frustrating in too many situations - if you are truly outnumbered by aliens, making distance before turning around and making a stand isn’t really an option, as you just won’t get far enough.

Honestly, Solstice Chronicles is a bit lackluster in most elements, but at least it is well polished. Unreal Engine brings loads of nice effects to the graphics and everything looks crisp in the presentation. The voice acting is nice too, perfectly serviceable. There are a few rough elements - incredibly underwhelming screens flash up for either mission Victory or Game Overs with no music and little transition. Just, minor elements give away that this isn’t a big budget game, but for the most part, it does a great job of feeling like a premium product.

Solstice Chronicles: MIA is a bit hard to sum up. It’s well polished and offers moments of great fun, especially in co-op, but as a single player experience the game is slow and starts to drag quite quickly. In some aspects it feels rough and unfinished. As it stands, if you have a friend to play Solstice with, you’re likely to enjoy your time with it - but if you’re going to attempt the game solo, then maybe wait for a sale.