Shiren the Wanderer: The Tower of Fortune and the Dice of Fate – Would you bet your life?

Shiren the Wanderer: The Tower of Fortune and the Dice of Fate

As another title in the growing library of PlayStation Vita exclusives, Shiren the Wanderer: The Tower of Fortune and the Dice of Fate is a familiar take on the roguelike genre. Aksys has finally unleashed this difficult RPG upon the Western market and is one of the many releases finally reaching English gamers, courtesy of Spike Chunsoft. 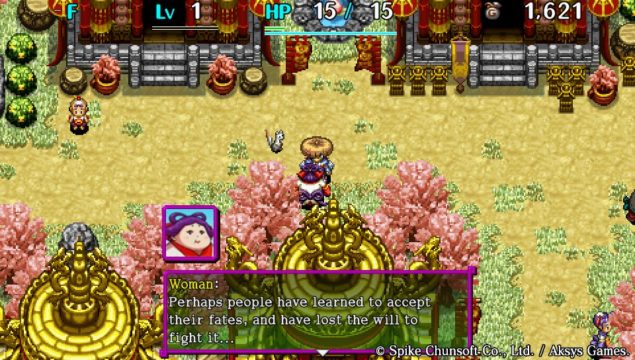 The Mystery Dungeon titles have all centered around turn-based strategic element to the flow of adventure. The character takes a step, then every other resident of the dungeon follows suit. Knowing how to anticipate what attacks each enemy uses and navigating around them can lead to clearing floors without taking a single hit, so using some strategy is key to making it through the tower’s later floors. However, enough traps are scattered around that can easily turn a perfect run into something horrifying if Shiren trips and drops all of his equipment when surrounded by monsters, for example.

Rather than delving through one static dungeon or a number of smaller satellite maps, each run in The Tower of Fortune starts off in a central hub village where items and money from a previous run can be banked, abilities (for night time use) can be swapped out, and a number of other smaller facilities can help give Shiren a headstart on the next run. From there, it’s a few short levels to progress before reaching the tower itself and the trials that reside within. 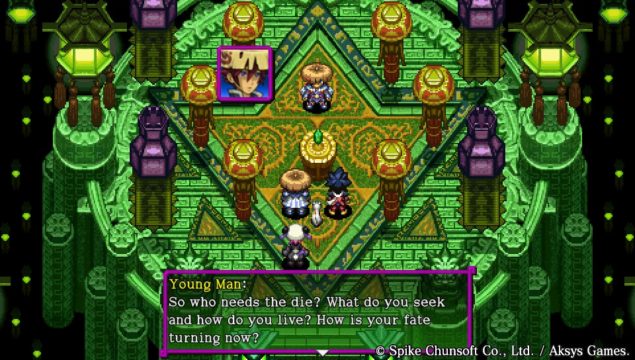 While I first lamented not being able to start directly at one of these later floors, I gained a slight appreciation for having a short warm-up period to level up and gain new gear. As each run starts Shiren off at level 1, gear that has been successfully stored away can be taken with and be used as a slight head start in a later run. This is always a risky gambit, as nearly everything in the player’s inventory is lost upon death (save for items that have been ‘tagged’ at an item shop which can be retrieved from a specific NPC, typically at a price).

Shiren the Wanderer: The Tower of Fortune and the Dice of Fate isn’t necessarily a brand new entry in the series, but rather an expanded version of the fifth (and most recent) title in the series which was released on the Japanese Nintendo DS market back in 2010. As this is the first title in the Shiren series to come stateside since the Wii entry, this style of roguelike still felt fresh, even in comparison to comparable titles on the Vita platform such as Sorcery Saga. The pixel art is quite vibrant and gives this updated release a sharp looking charm on a higher resolution screen. 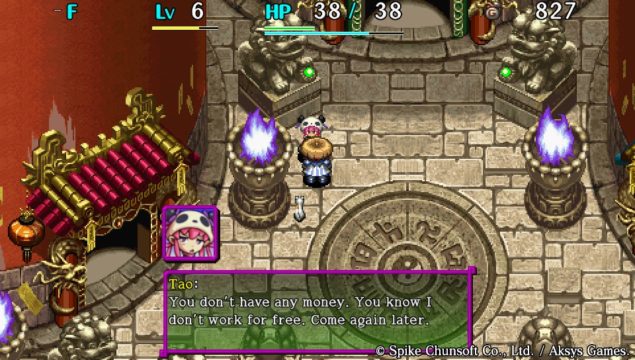 A new inclusion to the genre that doesn’t necessarily equate to a positive change is the addition of a day/night cycle when delving into the game’s primary dungeon. More than just a shift in the time, a transition into night time creates a greater challenge with some notable changes to the mechanics. New monsters replace those that would normally be seen during the daylight hours, each being more vicious and predatory than their diurnal brethren. Not only are these species more powerful, but they have a tendency to attack one another and level up. Other notable changes include a greatly reduced visibility that blocks much of the screen from view in addition to preventing scrolls from being read without equipping a torch (which takes up one of the player’s equipment slots) 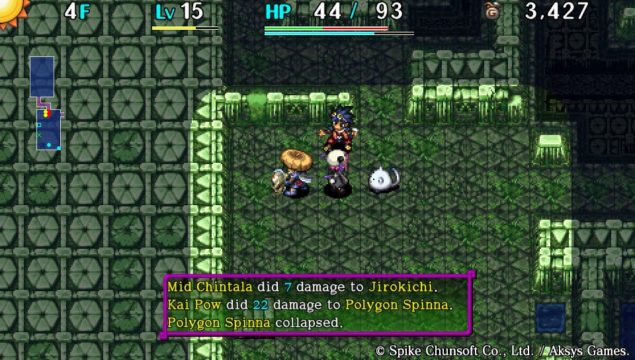 Shiren’s primary attacks are nearly worthless during these nighttime hours while those nocturnal beasts can strike for much more than usual, even hitting for far more than the character’s maximum HP. To offset this, Shiren gains abilities throughout the course of his adventure (either through levelling up or meeting certain NPC’s in the dungeon) and can be slotted into one of Shiren’s eight ability slots. These stronger abilities can only be used during the night hours and once per floor, but they can easily take out these beasts in one or two strikes. A combo I found particularly handy for clearing a floor was one that summoned every monster in a single room and struck them with confusion, followed up by a chain lightning spell that would bounce between targets and wipe out the entire floor.

Many of my deaths in Shiren were caused by my own fault by being foolhardy and over-estimated my own abilities. All too often, I found myself practically cursing at the system after losing an hour or more of progress with a careless misstep (which happens FAR too often during the night sections) with little to show for it for my next run. Without carrying tagged gear or using the storage banks found at various villages throughout the Tower, having to start from the very beginning with no proper equipment can be a real frustration. The Mystery Dungeon games have always had some notoriety for their challenge and the opening few hours to Shiren the Wanderer 5+ will certainly test gamers’ mettle and ability to cope with both frustration and loss. 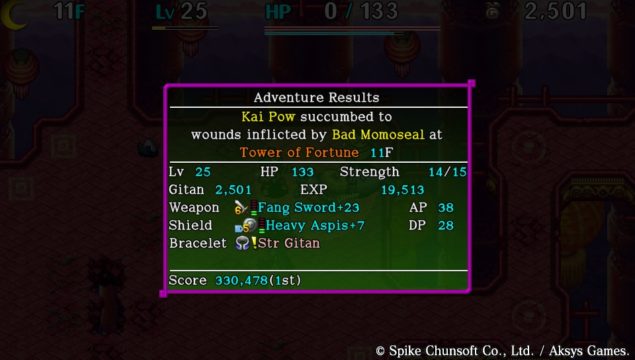 In an age when games that garner a following for being hardcore, such as Dark Souls and Dwarf Fortress, games that certain around permadeath are becoming more widely accepted in the gaming communities. Shiren the Wanderer: The Tower of Fortune and the Dice of Fate takes many features from twenty years of history within the roguelike genre, some that give this Vita title a great amount of depth and others that prove to frustrate more than challenge. For those willing to put their life on the line and set foot in the mysterious dungeons, Shiren the Wanderer marks one of the finest entries to date.

For those willing to put their life on the line and set foot in the mysterious dungeons, Shiren the Wanderer marks one of the finest entries to date.