If there ever was a golden era for Japanese action role-playing games, it definitely was the second half of the 90s, with games such as the Alundra titles, Brave Fencer Musashi, Threads of Fate and many others setting a new bar for the genre. Since then, action role-playing games have changed a lot, with only some of them, like the Kingdom Hearts games, retaining the light-hearted feel that made them so unique. Shiness: The Lightning Kingdom, developed by Enigami, tries to recapture this feel and it manages to do so quite nicely, despite a few issues which prevent it from being a masterpiece.

Shiness: The Lightning Kingdom is set on the Celestial Islands, a rather well-developed world where main character Chado and his companions will find themselves involved in a struggle for power between several powerful kingdoms. Over the course of the adventure, Chado will become one of the central figures of this conflict, as his ability to see the magical spirit Shiness will be of paramount importance to end the war and restore peace.

Shiness: The Lightning Kingdom's world, based on a manga drawn by the game's creative director, is incredibly well realized, with a deep backstory that makes it feel real and captivating. Sadly, the actual plot of the game is not as well crafted, as it's a rather simple story with very few surprising twists. The light-hearted tone, while refreshing, seems to have placed some limitations on the writing, as most dialogues are made up of jokes which become tiring quite soon. Characters also fall, most of the times, in the typical JRPG clichès: they're enjoyable but hardly memorable.

Where Shiness: The Lightning Kingdom's quality really comes out is in its gameplay, which mixes elements from the best action role-playing games to offer an experience that's very fun from beginning to end. The game's semi-open world format works incredibly well, with players having the chance to explore a variety of open field locations and dungeons filled with puzzles to solve, items to collect, wildlife to catch, which grants extra items, and enemies to defeat. Each of the 5 party members comes with a unique ability that is required to solve puzzles: Chado can summon a rock which can be used to reach higher platforms, activate switches and so on, Poky can manipulate magnetic fields, Kayenne can use telekinetics to move objects and so on. Some of the later puzzles will require players to use several abilities at once, so exploration never gets stale in Shiness, also thanks to the platforming elements which are simple, yet well developed.

Shiness: The Lightning Kingdom's battle system is also very well realized, sporting a level of depth that might be hard to grasp at first glance. The game's action battle system pits one single player controlled character against a single enemy, with players being able to unleash combo attacks by pressing two different buttons, powerful elemental spells, and other special techniques. Enemies can do the same, of course, but the vast array of defensive options such as block, parry, and dodge make the defensive phase as engaging as the offensive one. The game's magic system is also very well realized. At the beginning of battles, all characters start with a set amount of Shi for each element, which gets consumed as spells are used. Once depleted, players can restore them by channeling, with the type of Shi restored depending on the color of the battle area barrier, which shifts every few seconds. These many options make Shiness: The Lightning Kingdom's battle system incredibly engaging, despite battle controls not feeling as snappy as they should.

The game's magic system is also very well realized. At the beginning of battles, all characters start with a set amount of Shi for each element, which gets consumed as spells are used. Once depleted, players can restore them by channeling, with the type of Shi restored depending on the color of the battle area barrier, which shifts every few seconds. These many options make Shiness: The Lightning Kingdom's battle system incredibly engaging, despite battle controls not feeling as snappy as they should.

The battle mechanics are complemented well by several other mechanics, all of them influenced by other RPGs. Particularly interesting is how Enigami made party members not taking part in battle useful with the Support System, which lets players unleash some supportive actions depending on conditions that must be set beforehand a la Final Fantasy XII Gambit System. Additionally, there are a lot of customization possibilities, as special combos and spells can only be used after equipping the proper scrolls, so it won't be possible to have everything at one's disposal at all times.

Shiness: The Lightning Kingdom's presentation is another of its standout features, with its colorful and diverse locations. Character design is also spot on, despite not being exactly original, with anthropomorphic animals making up most of the cast. Sadly, the game could have looked much better if not for the Unreal Engine 3, which also causes some visual glitches that detract from immersion a bit.

Speaking about immersion, the choice of creating a fictional language is a very interesting choice that gives more credibility to the world. The soundtrack is also quite nice, featuring some atmospheric pieces as well as more rocking ones like the battle themes.

While all of Shiness: The Lightning Kingdom's gameplay features are well developed and work smoothly from beginning to end, one cannot help but notice how none of them are truly innovative.  Exploration features, puzzles, and battle system have been heavily inspired by older games, and those who have played these games will have a feeling of "been-there-done-that-already" that is hard to shake off. For this reason alone, Shiness: The Lightning Kingdom can only be considered just as solid action role-playing game that fans of the genre will surely enjoy, as long as they don't expect to play something revolutionary.

PC version tested (review code provided by the publisher). You can buy it digitally for PC and PlayStation 4 via Amazon. 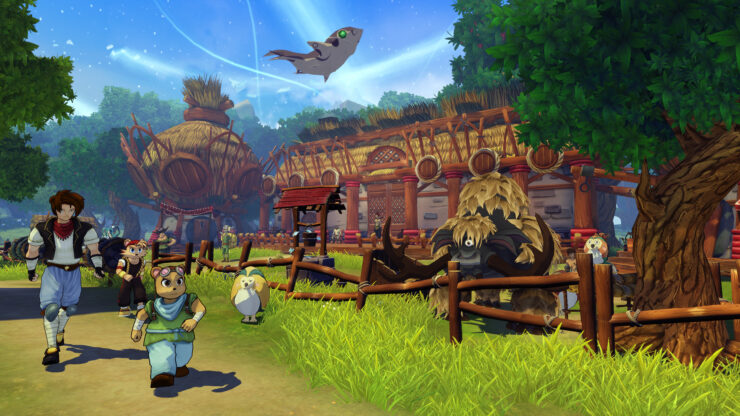 Shiness: The Lightning Kingdom is an action role-playing game that does a lot of things well, such as the deep battle system, exploration, and setting. At the same time, none of these are truly original, preventing it from being truly great. Still, those who love action RPGs from the 90s will find plenty to like in the game since Shiness is quite fun for the whole duration of the adventure, despite its predictable story, lackluster writing and somewhat wonky battle controls.