The Shantae series has always been considered among the best representatives of the Metroidvania genre, offering a platforming experience that goes beyond simply clearing stages. With charming characters, quirky humor, unique power-ups and well-designed stages, the Shantae games always manage to bring a smile to the fans of a genre which has moved away from the spotlight for far too long. Shantae: Half-Genie Hero, the latest entry in the series, takes everything that makes the series great and steps it up a notch to offer an unforgetful experience that no fan of platform games should pass on.

Shantae: Half-Genie Hero's story features all the characters that players have come to know in previous entries of the series, such as the charming half-genie Shantae, her uncle Mimic, her friends Sky, Bolo and Rottytops, Scuttle Town's airheaded mayor, her enemies the Techno Baron and Risky Boots. In the new game, Shantae will have to contend against an evil force which seeks to destroy the world, an evil that only her can defeat thanks to the special powers that come with being an half-genie. During the course of her adventure, Shantae will also be forced to take a difficult decision, ultimately learning more about her mother and the responsibility that comes with being a hero.

While Shantae: Half-Genie Hero's story plays out exactly like most players expect, with very few unexpected twists, it's the writing that makes it quite enjoyable. The series' typical witty and humorous tone is stronger than ever in Shantae: Half-Genie Hero, with characters never taking anything too seriously, giving the whole adventure such a joyous feeling that it's hard not to love not only every main character interaction but also simple NPC dialogues. Shantae: Half-Genie Hero is a game that truly oozes charm from every pole. 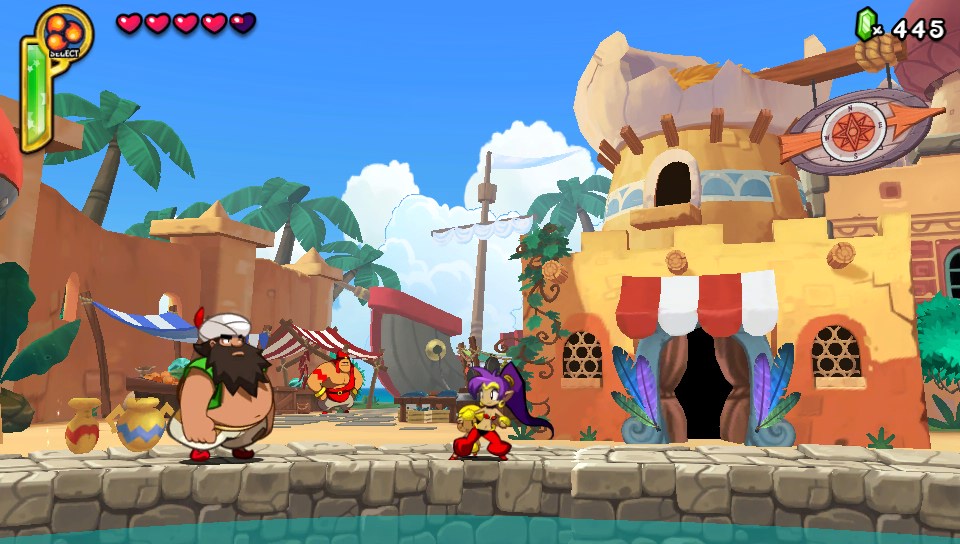 Shantae: Half-Genie Hero doesn't just deliver on the story front, as its gameplay is just as good. Like in the other games, players control Shantae as she explores a variety of action stages with the help of her unique abilities, such as the ability to transform into different animals so to be able to access otherwise inaccessible areas. As growth is, for the most part, a non-linear affair, with abilities getting unlocked by finding the corresponding relics, players may be forced to go back to cleared stages to find items required to complete quests and additional special powers. While annoying in most cases, this is hardly an issue in Shantae: Half-Genie Hero, thanks to the excellent level design.

It's hard to pinpoint what specifically makes Shantae: Half-Genie Hero's levels so engaging, as they flow in such a way that it's clear how every element has been placed in a certain location for a very specific reason, whether it's an enemy, an obstacle, a platform. Stages are also extremely varied, usually built around a specific mechanic that evolves as the stage proceeds. Interestingly enough, some stages can also be played differently depending on the acquired powers; Mermaid Falls, for example, has a layered design that allows players to play through the stage normally or by going underwater with the right transformation. With most stages having been designed this way to accommodate Shantae's powers, playing through them multiple times never feels tiring.

Even fighting enemies is quite varied, with Shantae having multiple options outside of her standard hair whipping attack. For the first time ever in the series, the half-genie has access to a variety of elemental spells, which can be upgraded to increase range, potency and more, as well as special attacks that can be performed in the right animal form. Using different offensive abilities is also a must in some stages, due to the way enemies are placed, a reminder of the game's excellent level design. Boss battles, while on the easy side, are also extremely varied, forcing players to uncover the bosses' weak spots by performing different actions such as destroying shackles, loading cannons and much more. 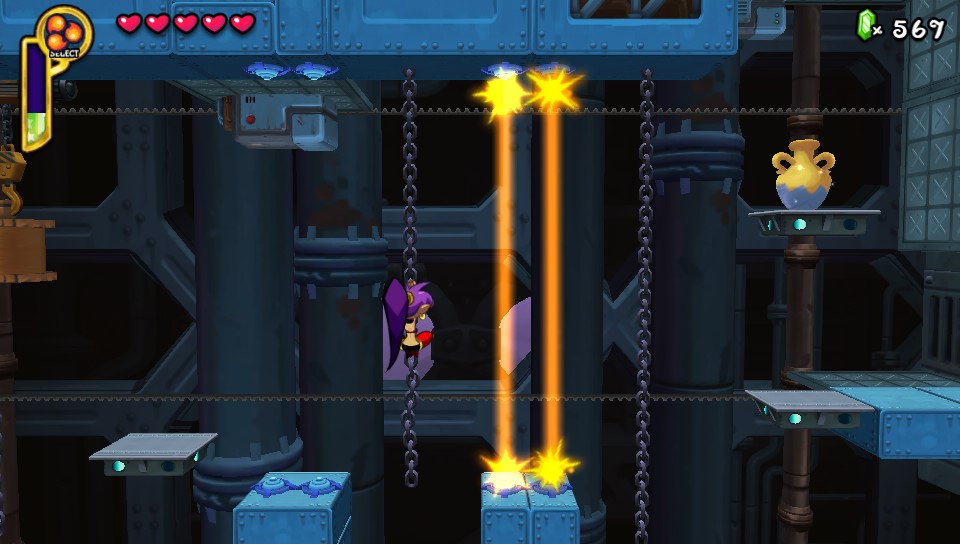 Shantae: Half-Genie Hero charming feel is vastly enhanced by the presentation, which is just as good as the rest of the game. For the first time in the series, Shantae: Half-Genie Hero features highly dynamic 3D backgrounds and 2D characters, a combination that feels even better than the pixel art aesthetic of previous entries. 2D characters and enemies also feature incredibly smooth animation, which makes them even more charming. When even the Menu System is beautiful to look at, one can only be amazed by the care the team put into crafting such beautiful graphics. All this, unfortunately, comes at a price for the PlayStation Vita version, as it struggles to keep a smooth frame rate most of the time. As such, it's probably better to experience the game on any of the other formats, which have no trouble running the game at a smooth frame rate.

The game's soundtrack deserves a separate mention, as it's probably one of the best we have heard this year in gaming.  All of the game's tunes are incredibly catchy, and it's impossible to resist the urge to tap your foot in time with the music, something that Shantae herself does in her idle animation. With both graphics and soundtrack being so good, Shantae: Half-Genie Hero is truly a feast for both eyes and ears.

With excellent writing, level design, presentation, and soundtrack, Shantae: Half-Genie Hero is the perfect execution of the gameplay formula introduced by the original GameBoy Color game. Sure, the game doesn't feature any true innovation, but when you're having so much fun taking down bad guys while transformed into a cute elephant, that doesn't really matter.

The first thing that comes to mind when thinking about Shantae: Half-Genie Hero is fun. The platform game developed by WayForward is a true blast to play, thanks to a beautiful presentation, great writing and an excellent, varied gameplay experience that never feels stale, with plenty of optional content that makes everything even better. Topping some of the previous entries in the series was very hard, but WayForward managed to achieve it with Shantae: Half-Genie Hero, releasing one of the best platform games of the year, if not the very best.