In this complicated world of ours, there's no such thing as black and white. It's difficult for others to understand one's motivations and actions, and, as such, it's common to misunderstand them completely. Even more so when it's an innocent child who's trying to understand what motivates an assassin. Due to this peculiar situation, the assassin Shadwen will have to make a lot of choices during her mission to kill the king: preserve Lily's innocence as much as possible by sparing her the worst, or just continue on the set path, careless of how the little girl will perceive her actions? This is a choice that players will have to make over and over during the course of Shadwen, a choice that ultimately influences the whole experience of the game developed by Frozenbyte.

Shadwen stars a rather unlikely duo: the titular ruthless assassin and a young orphan called Lily, whom she meets by chance after she's caught by the guards of the castle stealing apples and sneaking around places she should not be in. Unable to leave her alone, Shadwen decides to bring her along for the ride, a complication for her mission that will ultimately influence her greatly. Shadwen's story, which is mostly narrated through cutscenes made up of drawings, isn't anything to write home about: it's a typical, and somewhat predictable fantasy story from beginning to end. Still, the gritty, dark fantasy atmosphere and the narrative style, which encourages players to listen to guards talking to understand more about the general situation of the kingdom, makes it somewhat enjoyable. This somber atmosphere, highlighted by an appropriate (but kind of repetitive) soundtrack, is made less  oppressive by the short interactions between the two main characters, which give a more intimate feel to the adventure. Lily's innocence contrasts nicely with Shawden's determined approach, with the latter eventually opening up to the little girl by the end of her mission, something that will definitely influence a critical decision that players will have to make at the end of the game.

Choices in general make up a big part of the experience in Shadwen, as players actually have plenty of freedom during the course of the adventure. The game is a rather straightforward stealth title where players will have to stay hidden from enemy guards at all times and reach the end of each stage, which is represented by sets of doors which require both Shadwen and Lily to be opened. Reaching them is pretty easy for our assassin, as she is empowered with a vast array of tools and abilities which make traversing each stage almost a walk in the park, but the same cannot be said about Lily, who needs all the help she can get to slip by unnoticed. This is definitely one of the more interesting twists, as  the true challenge is for players  to clear the field for Lily to reach the end of the stage unseen. How to actually do that, it's up to them.

In most cases, all that players will have to do to make Lily move towards the end of the stage is distracting guards. They can do so by moving around a variety of objects, make some noise by using weapons, destroy crates and barrels, knock down bottles and more, or simply get close enough to attract guards' attention without alerting them. Once the coast is clear, Lily will be moving automatically from one safe spot to another, spots that are also safe for Shadwen, if she ever needs to hide. The young girl's AI is quite competent, but the same cannot be said about guards, who will ignore both her and Shawden even when very close. This cheapens the whole experience a bit: when the main focus is to get the young girl to safety, having guards represent mere roadblocks and not immediate danger is definitely detrimental.

Despite this issue, Shadwen's experience still proves to be worthy, albeit a bit rough around the edges. As already mentioned, Shadwen has a lot of tools at her disposal, including a variety of weapons, which must be crafted by finding schematics and appropriate materials in treasure chests, and her trusty grappling hook, which allows her to move objects from a distance and quickly reach higher ground. The grappling mechanics, which take some time to get used to, add an interesting platforming element to the whole experience, but things could have been better with a little more polish, as all the game's physics definitely feel off. Quite often, players will be discovered due to the wonky grappling hook mechanics or due to objects moving in unintended ways, rather than due to actual mistakes.

Luckily, getting discovered in Shadwen isn't the end of the world, thanks to some unique time manipulation mechanics. Unlike the majority of stealth games, players actually control the flow of time in Shadwen, having the ability to stop it by simply not moving, or even rewinding it if discovered or if a mistake has been made.  These mechanics almost give a turn based feel to the whole experience, giving players all the time they need to plan their next move. Also, with the game requiring players to make it to the end without being discovered, the inclusion of these mechanics is quite welcome to avoid excessive frustration.

There will be times, however, when things will be getting though, and players might find it tempting to resort to violence to find an easy way out. The game does an excellent job in showing how a violent approach can have consequences: if Lily watches Shadwen brutally kill a guard, or discovers a dead body, she will change her opinion of the assassin, influencing the story from that point onwards. The differences aren't all that huge, but the choice between lethal and non-lethal  means ties nicely with the game's themes and even the final sequences, when players will have to make a critical choice impacting the ending.

Unfortunately, Shadwen is not the game that could have been due to some issues and a general lack of polish. The already mentioned physics aren't the only unpolished element of the game, unfortunately, as it features a rather limited amount of content and locations variety. The experience itself lacks a bit of variety as well, as there aren't a whole lot of strategies that can be employed, considering the bad enemy AI and the lack of a true combat system. The game's presentation is also pretty bare-bones, with average last-gen graphics that, at least, allow the game to run at steady 60 frames per second on PlayStation 4. The soundtrack, which includes a limited number of tracks, gets tiring quickly, but voice acting is, at the very least, passable.

At the end of the day, Shadwen's assassination mission is not exactly memorable, due to the general lack of polish and short length, but it can definitely be enjoyed thanks to its core mechanics, the unique stealth experience and the decent amount of freedom players have during the actual sneaking. Whether Shadwen succeeds or fails her mission, fans of stealth games will probably have a good time, granted they keep their expectations in check. Everyone else may want to try the game out first before purchasing. 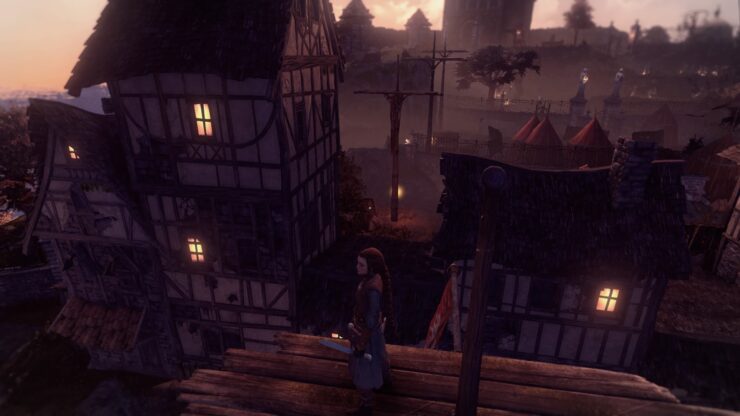 Shadwen is a competent and somewhat enjoyable stealth game, but not exactly memorable. While the core experience and some of its mechanics, such as the time manipulation mechanics, are quite well done, the game suffers from a general lack of polish, an average last-gen presentation and a rather limited amount of content. When Shadwen works, however, it works well, so Frozenbyte definitely has a good starting point for a potential sequel.