Shadow of the Beast Review – A Legend is Reborn

Shadow of the Beast

The original Shadow of the Beast, a side-scrolling adventure game originally released back in 1989 on Commodore Amiga, is fondly remembered by those who have been playing video games for a very long time. In an era when video games weren't particularly complex, Shadow of the Beast shook the gaming world by introducing so many interesting concepts and twists that have influenced all following video games in more ways than one. Almost 30 years later, things have come full circle with the PlayStation 4 re-imagining of Shadow of the Beast, a re-imagining that manages to be incredibly compelling, albeit not as revolutionary as the original release.

The Shadow of the Beast re-imagined story isn't all that different from the original's. Once again, players will be controlling the monstrous warrior Aarbron, who was kidnapped as a child and later corrupted by a powerful evil being. Following a fateful encounter with a man closely related to him, Aarbron finally remembers his human origins, frees himself from the influence of those who controlled him and decides to seek vengeance against them. The Shadow of the Beast story isn't exactly what one could call shocking, but it's definitely well told through several short cutscenes and additional material that can be accessed at any time between stages such as Timeline sequences, Bestiary descriptions and more.

What sets Shadow of the Beast apart from similar games is how it gives players the choice on how much they want to be involved in the narrative element: cutscenes don't reveal much, and at the beginning players cannot even understand the different languages used by other characters, so players need to put in some extra effort by checking out the additional material and purchasing the subtitles features in the in-game shop if they want to break through what feels like an impenetrable narrative at first. This is also one area where the game differs greatly from the original release, as the latter's story elements were always shrouded in a bit of mystery, and there was really no way to learn more about what transpired. 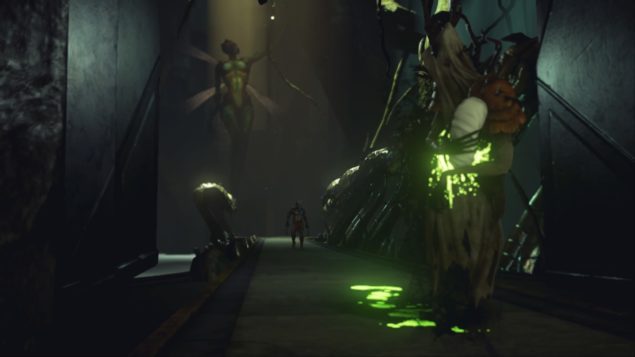 From the narrative elements alone, it's pretty clear how Shadow of the Beast has been strongly influenced by modern games. By playing the game further, it's quite evident that most, if not all, gameplay systems have been inspired by some of the more popular modern video games. This isn't really detrimental, as all these features and mechanics have been masterfully meshed together, creating a very unique mix that's very hard not to like.

At its very core, the Shadow of the Beast basic gameplay experience is that of a side-scrolling action adventure title. Players will be controlling Aarbron during his quest, explore a variety of beautiful and diverse locations, all set on an alien planet, and confront a variety of enemies. Exploration is anything but a straightforward affair: taking cue from classic side-scrolling adventure games such as Prince of Persia, Another World and Flashback, just to name a few, players will be jumping from platform to platform, avoid traps, solve puzzles and collect a variety of additional items that restore health and unlock more content. Exploration controls are very similar to those of the aforementioned classic sidescrolling adventure games, so much that the slightly sluggish feel is definitely intentional. They do feel a bit off at times, especially for those who never had the pleasure to experience one of these games, but once they are mastered, which doesn't take that long to begin with, players won't have any trouble traversing the beautiful stages of the game. 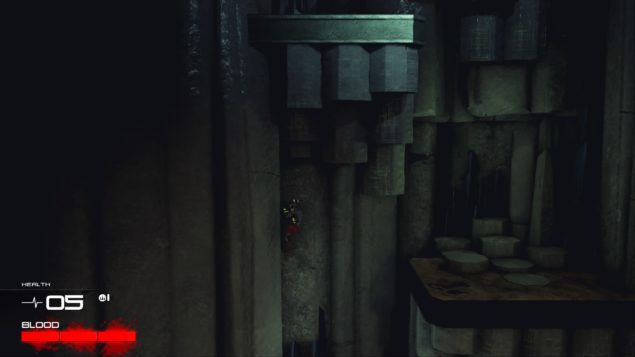 During stages,  Aarbron will often have to confront a variety of enemies that will try to put an end to his life. Not counting single enemies roaming about stages, who pose little to no threat, enemy encounters are set in specific locations, which get walled off as soon as the encounter begins. The Shadow of the Beast battle system has been influenced by another popular modern video game series, Batman: Arkham, with a smooth, rhythmic feel that makes it very compelling and fun. Unlike the Arkham games, enemies in Shadow of the Beast die with a single hit but are way more aggressive, so quick strategic thinking and planning are required to do well in battles. Not counting the basic attack, players can also stun enemies, block their attacks, move behind them, do a roll to avoid attacks and unleash a variety of special attacks requiring Blood and Wrath, some of them coming with very special effects such as health regeneration and more. Most of these special attacks also require players to complete some simple quick time events (QTE) which slow down battles' pace a bit, but in a meaningful way.

There are a lot of reasons to do well in battles in Shadow of the Beast. Keeping the combo going without getting hit by enemies will allow players to increase the score multiplier, with the total score contributing to the final grade awarded at the end of each encounter. Some encounters also unlock some additional ones when a Gold grade or higher is obtained. This is yet another instance where Shadow of the Beast has been influenced by modern games, the Platinum Games' developed action titles such as Bayonetta in particular: missed optional encounters influence the final grading for each stage, which, in turns, influences the total amount of Mana obtained at the end of every stage. As Mana is used to unlock special moves and Talismans, which introduce some degree of customization, as well as the already mentioned Forbidden Tomes (which enable subtitles for languages used by other characters during cutscenes, in the Wisdom of Shadows) it's very important to maximize Mana gain as much as possible. The presence of Leaderboards for each stage adds yet another incentive for particularly competitive players to do well. And if this is not enough to warrant another playthrough, completionists will be happy to know that playing the game on harder difficulty settings will unlock additional story content that cannot be accessed when playing the game on the easiest difficulty setting. Since a single playthrough doesn't require much time, playing through the game again to unlock more content can definitely extend its length considerably. 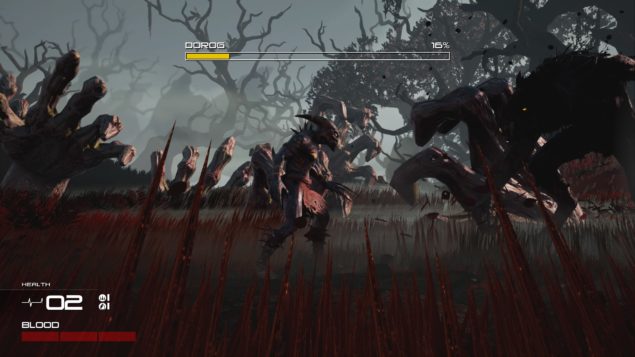 Leaderboards aren't the only form of social gameplay features included in Shadow of the Beast. Taking cue from the Souls series, players will also encounter some mysterious darkness pools during stages, which represent locations where others have died. By accessing them, players have the ability to send a gift to the specific player or complete another QTE based mini-game which rewards them with a Shadow Stone, which is used to summon the Shadow of another beast to help during battles. These features aren't terribly original, but they're so well integrated into the whole experience that they don't feel superfluous.

With so many not very original mechanics, one might think that playing through Shadow of the Beast could feel like an unexciting slog. Nothing farther from the truth, actually, as the game has been designed in a way that even multiple playthroughs aren't going to feel boring or repetitive. For starters, all stages come with some unique mechanics that clearly define each and every stage. From locations, to puzzles, gimmicks and enemies, each stage features something new and exciting, which contributes in making the whole experience quite varied and ultimately very enjoyable. With each puzzle working in a different way,  new enemy types requiring different strategies to defeat and gimmicks never overstaying their welcome, there's very little risk of ending up going through the motions. Boss battles at the end of some stages also take advantage of the puzzle's gimmick introduced in the stage, making the whole Shadow of the Beast game design feel incredibly cohesive, despite incorporating quite diverse mechanics and influences.

If the Shadow of the Beast experience shines from beginning to end, the presentation is no less good. The game's beautiful and unique looking alien environments sport a lot of very nice looking lighting and particle effects which don't impact performance, with the game running at 60FPS most of the times, not counting a handful of situations. Character design also shines through thanks to detailed models, and the game's menu system is also very slick looking and functional. The Soundtrack is also quite good, with a few atmospheric pieces that complement the exploration sequences quite well. Sadly, it's not on the same level of the original, but it gets the job done nicely. 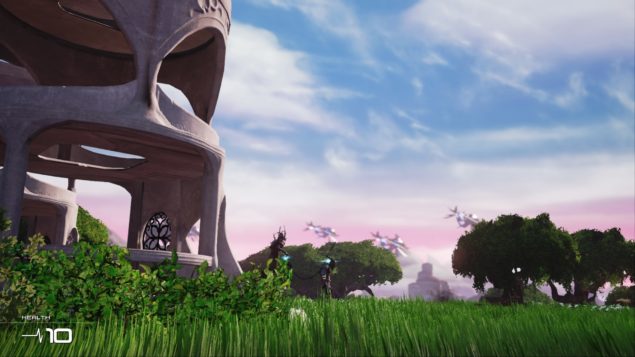 The re-imagining of Shadow of the Beast isn't as revolutionary as the original game, but this is hardly surprising, considering how much the video games industry has changed since 1989. In a way, the new release of the classic adventure game has reaped what the original release sown, by taking the elements of other games that have been influenced by the 1989 game, closing the circle. It wouldn't be fair, however, to just dismiss Shadow of the Beast in light of its apparent lack of originality, as creating such a cohesive experience incorporating so many different influences is no small feat. Ultimately, Shadow of the Beast is a love letter to video games from all eras, a game that's well worth the time of those who don't require all of their games to be as original as possible.

With its excellent side-scrolling platforming based experience, smooth battle system, intriguing narrative style, excellent graphics and high replay value, Shadow of the Beast is definitely a quality product. The lack of originality and somewhat unresponsive controls will be issues for some, but the well designed experience makes it easy to get past them.