Samurai Warriors has traditionally been focused on the Warring States periods in their entirety, from the middle of the 15th century all through the Tokugawa Shogunate. Along with that tumultuous timeline, a number of numerous warlords and daimyo ascended the ranks to unify Japan, the most famous of which being the likes of Oda Nobunaga and Takeda Shingen. As a clan that pledged loyalty to both of these men, the Sanada family was a major player in much of Japan’s rich history. Breaking away from the conventions of Samurai Warriors’ countrywide storytelling, Spirit of Sanada narrows its focus down down to the major battle of the Sanada clan’s patriarch, Sanada Masayuki, all the way until Yukimura’s final battle in Osaka Castle. 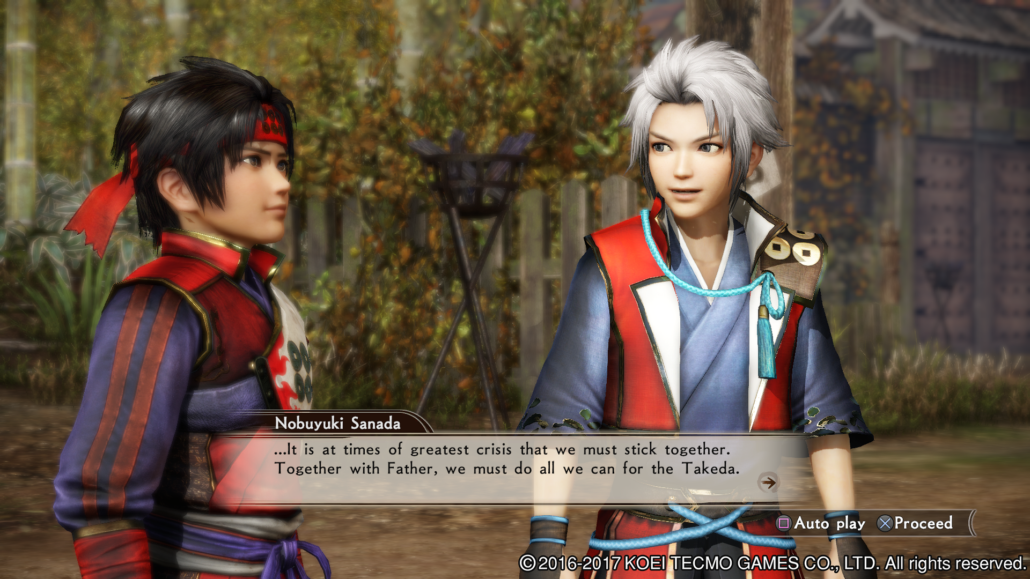 As the story focuses upon Sanada Masayuki and his progeny, additional playable characters are introduced at a surprisingly slow rate for a Warriors title. Nearly twenty hours had passed by the time I was finally able to play as Sanada Yukimura proper. Yukimura is one of the few characters to properly age across the time period presented (something reserved almost exclusively for Sanada clansmen) and the first few times players will take control of him, he’ll be as a scrappy young kid with a stick rather than the Crimson Demon he’s more famously known as. Before that, my time as a Sanada was spent focused on Sanada Masayuki across nearly every multi-stage battle right up until the fall of Oda Nobunaga.

The multi-stage battles are one of the new additions to the Samurai Warriors: Spirit of Sanada and adds new incentive to playing the fights in a more tactical fashion, rather than going straight for the enemy general. Most of the major fights during the Warring States periods were notable enough to be historically recognized, but what of the skirmishes that led up to those encounters? By playing through the preceding fights with an emphasis on defending your fellow generals and completing objectives, new stratagem can be unlocked for future battles that can easily influence the outcome. Most of these tactics come in the form of providing aid to your teammates or breaking the defenses of the enemy army. In my experience, it was well worth replaying previous battles to unlock these carry-over abilities, as they would help to complete every objective in a battle and earn those elusive ‘S’ ranks for high performance. 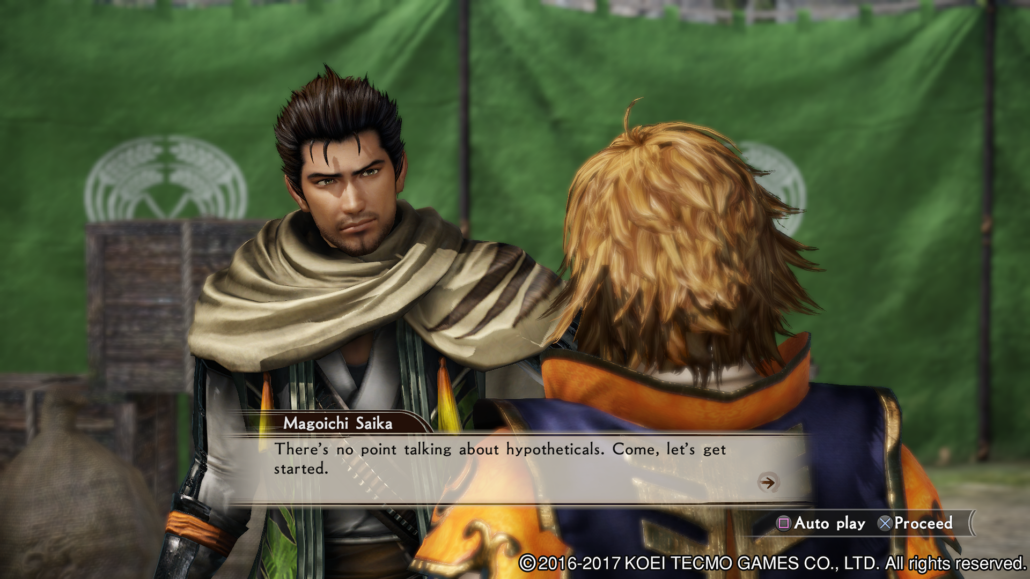 While most of the multi-stage battles are fought with the Sanada viewpoint, secondary battles help give a feel for the other factions’ motivations for taking part in a given battle. While not as numerous as the fights that Masayuki and songs participate in, it’s refreshing to take off that crimson armor and take part in another army’s tactical warfare. With how robust and growing the Samurai Warriors roster has become, it just wouldn’t be the same to cut the roster down to only ten or so major players. Instead, Spirit of Sanada boosts the roster count past the 60-character mark, making it the largest roster to date for a Samurai Warriors title.

When it comes time to step onto the battlefield, fans should know by now what to expect from a Dynasty or Samurai Warriors title. Staring down hundreds of nameless soldiers and mowing them down as you make your way to the enemy generals is all an established concept for this specific action sub-genre. Sometimes you want to use a little square attacks, maybe mix in some triangle and musou specials too. However you want to mash, Spirit of Sanada will flow well and look great doing it. Even when faced with dozens of troops on screen and flashy special moves flying, the latest Samurai Warriors runs at an incredibly stable 60 frames per second on the Playstation 4 Pro. 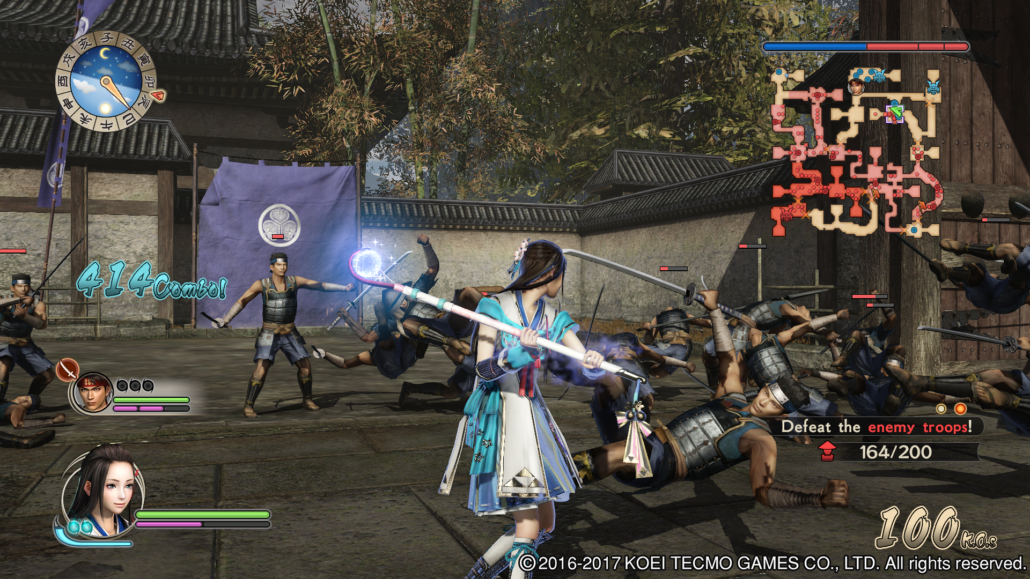 Fans often lambast the Dynasty Warriors franchise for its repetitive combat. I personally adore the sub-genre of action games that Omega Force has created, with each battle making me feel as a war god by the time I defeat the enemy officer. By giving each character unique attacks as well as something special on the R1 button that’s unique to them, whether it’s a temporary buff or defensive move, helps to mix things up whenever a new character is unlocked. The time spent with each Sanada family member might be longer than I would like from a title with a roster of its size, but that helped me gain a deeper appreciation for the mechanics of each character that much more.

When not triumphing across the battlefields of Japan, the Sanada clan sometimes needs to spend some time at home and prepare for battles. During this rare bit of downtime, players can engage in a number of activities including farming and fishing to gather raw materials that can later be turned into consumable potions and buffs in combat. There's also the all-important blacksmith, where weapons can be upgraded with statistical increases and elemental effects. Players should get used to the starting weapons that each warrior comes equipped with, as it'll be a long time before they see any customization in that front. Players can also kit themselves out with new horses and accessories, the latter of which can only be acquired through random drops from routing an enemy officer.

Despite the obvious lack of a number in the title, Spirit of Sanada is more assuredly a true Samurai Warriors sequel. With its laser focus down along the trials of the Sanada Clan and their ever-evolving allegiances, players might miss just how much additional content is thrown in. From the castle town support to the multi-stage battles, Spirit of Sanada has taken the series to new heights and with it, the tale of the Crimson Demon can finally be told in its entirety.

Spirit of Sanada is more than just a Samurai Warriors side story, bringing the series to new heights with its largest roster and longest battles to date. The new multi-stage battles will have players take a more tactical approach if they want to reap the rewards.