Rock Band Rivals Review – Even Rock Stars Have Their Off Days

The Rock Band Rivals DLC introduces two new game modes along with new venues and cosmetic items but is it any good? It’s time to face the music.

Fans of the earlier Rock Band games may remember Rock Band 2’s ‘Battle of the Bands’ mode which gave players weekly challenges. These challenges were usually based around a theme (for example, The Evolution of Metal had five metal songs from different decades) and always came down to whichever band had the highest score. Rock Band 4’s Rivals mode is essentially the same thing; except this time, up to ten players can team up to create a crew. Working together (I say ‘together’ loosely as online multiplayer is not available yet), the crew will do its best to reach the top of the leaderboard.

As a crew leader, players will have to add local friends individually and will have the power to approve requests from friends or other players. Those playing on their own can search for crews with space for more players. Once a crew has been assembled, members will have the opportunity to try their hand at the weekly challenge. Crews then earn experience each time a member plays a song on the chosen theme. There are also three Spotlight Songs (these songs also fit the weekly theme) which prioritize the highest score on each instrument. Take this week’s theme as an example: ‘The Thing About THE’ – Play any songs by artists with ‘the’ in their name. Assuming players own all the DLC available for Rock Band 4, this leaves a choice of 414 songs out of the 2343 tracks in the game. Playing each of these songs once will grant the crew experience points depending on the songs’ difficulty and the player’s performance. The Spotlight Songs can also be played to boost the crew’s score.

Unfortunately, Rock Band Rivals mode features a number of problems, particularly if you enjoy playing the game locally with friends. Local friends are not added to the crew automatically; despite them being signed in as an active profile on your console. This seems a bit silly considering you are playing the songs with your local friends as the crew leader, but only the crew leader’s score is submitted. Alternatively, players that don’t have anyone to play with can join a crew or create their own. Of course, if you start your own crew with only one person in it, you’ll never reach the heights as any of the fully stocked crews. In order to get the most out of Rock Band Rivals, players will need to find a dedicated Rock Band community where they can get involved. Something else that is incredibly annoying is that if a player has been playing for a few weeks on their own and then decides to join an established crew, they will have to disband their current crew to do so. Unfortunately, making this decision will throw away all of your progress as it is not transferable. 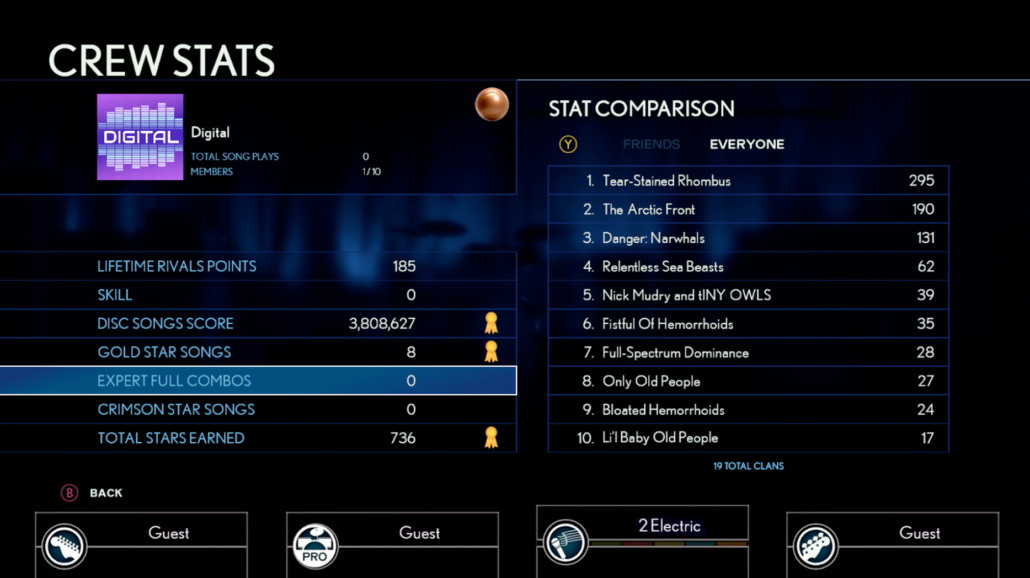 My experience with the Rivals mode so far has been disappointing. Finding a crew that will accept me has so far proven to be impossible and when creating my own, I couldn’t even add my friends successfully. The Spotlight Songs and Weekly Challenges are a welcome additional however, maxing out on these requires players to have purchased the DLC songs. If you haven’t already purchased these songs, the small amount of experience that you will earn from playing them once in a (mostly likely) incomplete crew probably won’t be tempting enough to make you want to part with your cash. Overall, it seems that Rock Band Rivals has a good structure that could thrive if the game were popular enough, but it doesn’t seem to be operating realistically and logging in shows dozens of crews with only one or two members.

Arguably the best part of the Rock Band Rivals DLC is Rockudrama; aptly titled ‘Beneath the Tuneage’. This mode features the first playable rock documentary to feature in the game and is actually far more enjoyable than Rock Band 4’s original campaign. Starting in the late 80s, your band take on various gigs, encountering a number of setbacks along the way, as their fame slowly rises. Humorous interviews with fictional fans and bands (with more than a passing resemblance to existing musical celebrities) punctuate the band’s story and performances, making the Rockudrama a light-hearted and fun mode to play through. Surprisingly, this campaign is also very short, featuring just a few brief chapters. However, after completing the Rockudrama, this appears to have been a good decision. Unlike the main campaign in Rock Band 4, the Rockudrama doesn’t drag on unnecessarily and thankfully, doesn’t fall into the trap of overusing any cheesy jokes or references either.

Furthermore, this mode incorporates a ‘Wager System’, that encourages players to aim for higher scores by betting on how well they will perform at each gig. When a band hits their goal or does better, they will be awarded additional fame points which accumulate over the course of the documentary. Developer Harmonix has also included additional challenges that can be utilised to boost players’ fame scores even further. For example, one challenge offers double the amount of fame earned on a set while only letting players build health when in overdrive whereas another greatly reduced the length of the note lane and made the notes invisible. Most of these challenges appear to pay off pretty well and the fact that players are offered so many chances to maximise their scores reaffirms that this DLC has been designed with hard-core fans in mind. However, one thing that seemed somewhat unclear was the mode’s level of replayability. 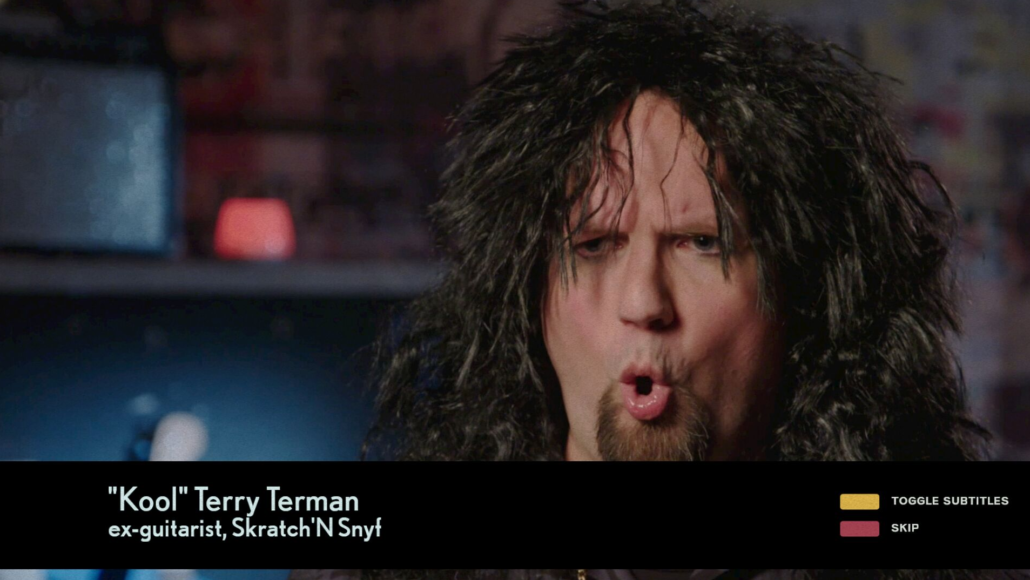 The final chapter of Rock Band Rivals reveals all the fame that the band have been collecting throughout their journey and unveils two endings: a ‘Good Ending’ and the ‘Best Ending’. On the surface, this seems fair enough: if you play exceptionally well, you are rewarded and if you’re not quite on that godly level of Rock awesomeness, you still get a satisfactory conclusion. Although, there are a few problems with this decision. If players have not achieved the amount of fame required for the Best Ending (but still want to see it) they will have to restart the Rockudrama and play through it again. This seems overly tedious considering that the documentary material will not change when retrying with a different band. Having seen both endings, it isn’t worth playing another few hours just to see a two-minute clip that is slightly different to the Good Ending. By adding the Best Ending into this mode, it seems as though Harmonix have offered some form of replayability. However, like other parts of the game, this falls short and is probably not worth playing a second time.

Overall, I have no complaints regarding the game’s performance. It ran very well and with Rock Band 4’s calibration settings working so well anyway, I didn’t have any problems with the DLC. Nevertheless, if you happen to play on an Xbox One console and use the Legacy Game Controller Adapter, you will not be able to play the Rivals mode with your friends. A limitation of the Legacy Adapter is that it allows only one player connected to the device to sign on their profile. I understand that this is a hardware limitation in place by Microsoft, however it is worth mentioning as it greatly affects local players (and this limitation is not stated anywhere in the game).

Our review copy of Rock Band Rivals did not come with the new Rock Band 4 instruments by PDP and as a result, we are unable to comment on their performance. Nonetheless, the overall opinion online seems to suggest that they, much like the MadCatz instruments at Rock Band 4’s launch, are disappointing. PDP’s new instruments may be lackluster, but their Wired Legacy Adapter (which allows Xbox users to plug in their Rock Band 3 Midi PRO-adapter is supposed to be perfect)… unless you live anywhere in Europe where it is not available to purchase.

Rock Band Rivals offers less than expected, considering the state in which Rock Band 4 was released back in October last year. The content provided is not quite sufficient when taking the length of the Rockudrama and the poorly executed Rivals mode into consideration. Unless preordered, this expansion doesn’t include any additional songs and with the Rivals mode not working as expected, I believe that the price for the DLC may be a bit too steep. As a fan of the Rock Band franchise, it’s a shame to see that Rock Band 4 and its most recent expansion haven’t managed to come close to what Harmonix achieved with Rock Band 3 back in 2010. Despite the developer’s focus on creating content that appeals to long-time hard-core fans, which is commendable, the game still simply isn’t up to scratch. Players who miss the Synchronous Online Multiplayer from Rock Band 2 & 3 will be happy to see that it is finally returning this month, although as of December 6th, this mode is still unavailable. Rock Band 3 is the reason that I still keep our Xbox 360 plugged in, and Rock Band Rivals has proven why I shouldn’t unplug it anytime soon.

Rock Band 4 Announced For Xbox One and PlayStation 4